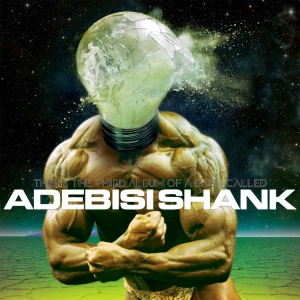 The Irish math rock trio is more dance-y than ever with their third release!

At first, I feared the band’s further integration of more electronic elements, as this can become a fad-turned-grind that a band can become isolated or even trapped in. Adebisi Shank, however, does not fall into this trap. Rather, the band takes great strides to make sure that their originality and core sound (as featured in both previous albums) is not lost in the new-found digital age.

What is most refreshing in this release is the amount of bass and its variance.  I’ve seen bands incorporate more electronic elements and get lost in the bleep-bloops of the modern age. High-flying synth melodies can become overwhelming, leaving no breathing room for a bassist or other instrumentalists. Vincent McCreith fights this usurping tyrant with groovy bass lines that will have you jamming and dancing in your underpants. ‘Mazel Tov’ features an undeniably funky, bouncy groove that will have you using phrases like “far out” and “groovy, baby!” ‘Sensation’ and ‘Turnaround’ also feature infectious, bouncy bass lines that will have you grooving and dancing the night away.

Another trap that bands can fall into with electronica is repetition. That is, every song sounds the same as the last. This is the Third Album of a Band Called Adebisi Shankfeatures no such faults, giving each track their own individual feel with plenty of variation- something most electro-bands fail to achieve.  The amount of synth work in this album is truly stunning. You can feel the amount of energy put into each track pour into your ears, flow through your temporal lobe and make your neurons explode with a pulsating energy that is anthemic in nature. Don’t believe me? Just listen to their opening track ‘World In Harmony’ or, better yet, their track ‘Voodoo Vision’, which has me stunned. After hitting you with all of this energy, Adebisi Shank allows a small, somber respite to permeate before hitting you with more uplifiting dance-y jams without any quiver in their energy.

This Is the Third Album of a Band Called Adebisi Shank does not disappoint in terms of originality, liveliness, nor instrumentation. The cohesiveness and consistency of this album- and the band overall- is a real treat for the listener. The band has a knack for hitting you with everything they’ve got, and I openly welcome each “punch” they throw. Adebisi Shank has really outdone themselves with this must-have album of 2014. (Katt Hass)

For fans of: Anamanaguchi, Brontide