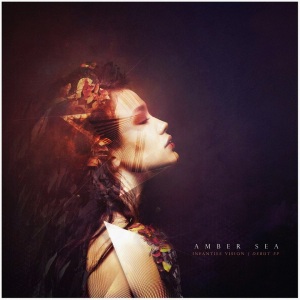 French sailors have an old saying, “Rouge le soir, bel espoir. Rouge le matin, de la pluie, en chemin.” For those who can’t read French, it’s folklore for determining seafaring weather, which roughly translates to “Red at night, great hope. Red in the morning, rain on the way.” Such lore and tales are relics of tradition, created through prior years of observation to serve as warnings or guidelines for future generations. While tradition and folklore has kept certain dangers at bay, no warning device can prepare or shield you from the oncoming violent storm that is Amber Sea. Their debut EP, Infantile Vision, embarks on heavy waters, encompassing the gentlest of tides and the crushing force of a tsunami.

The album opens with “White Materia: Sideral”, a track marked by sudden crushing waves of heavy-hitting breakdowns and bursts of melodic riffs. At first listen, you will be suspended in a soothing sense of weightlessness by a layered, ethereal intro built on a sweeping piano medley and light guitar overlays. But do not be so deceived; behind these gentle waves of melodic instrumentation lies a raging storm. Calm melodies quickly turn violent as driving percussion from drummer Guy Tormel leads to storming riffs by guitarist Kevin Chasnais. Vocalist Matt Rouland’s low growls, hefty mid screams, and well-executed cleans join the fray of heavy instrumentation, flooding your ears with the rage and might of an ancient sea.

Next is “Deci(mate)”, a blistering track packed with the perfect blend of spastic riffs and controlled breakdowns. Amber Sea wastes no time, immediately hitting your ears with a lightning-fast solo from bassist Axel Richet before delving into spastic heavy riffs and Rouland’s ferocious growls backed by Tormel’s relentless percussion. The addition of vocalist Chris Baretto of Monuments adds a perfect layer of split scream harmonies with Rouland and an excellent pairing of clean vocals with heavy mid screams. Richet’s unwavering display of instrumental prowess shines once again in a brilliantly executed slap-bass solo before diving into waves of heavy breakdowns. What’s most impressive in this track is the band’s ability to lose themselves in spastic riffs and then regain control in a drastically slower-paced, yet crushing breakdown. It’s a dichotomy that shows an excellent amount of technical prowess and is a muscle that the band frequently flexes. What’s more, Amber Sea allows your ears a brief, gentle interlude to let you hear and see the beauty in the storm of heavy riffs before delving back into the crunchy, gritty, chaotic guitars that make up this track.

“Shinigami” is an explosive track laden with savage riffs and controlled pacing that creates an aural assault unlike the rest. It’s heavier. It’s grittier. And it’s more chaotic than you could imagine. Choppy, fast-paced riffs and melodic solos are backed by forceful percussion and heavy growls. What makes this track interesting is their mashing of pacing: fast-paced chugging crashes suddenly into slow, controlled sliding breakdowns led by Chasnais’ heavy guitar riffs and Richet’s sliding, groovy bass. Best yet, their delivery of furious and relentless instrumentals is seamless. The breakdowns in this track are met at a considerably slower pace that will leave you shaking in anticipation for the next wave of assault, the next chug, and the next sexy bass slide. The amount of energy and discipline necessary to deliver such controlled chaos is remarkable and extraordinary.

“Black Materia: Meteor” ends this brief but fierce album, packing a final wave of assault with ear-shattering breakdowns and spastic melodic interludes. A chaotic aria quickly breaks into heavy, grooving riffs and pulverizing breakdowns. Intermittent melodic solos –both unbelievably fast paced and groovy- break the seemingly relentless aural onslaught of bone-crunching breakdowns. Just for safe measure, Amber Sea hits you with one last rage-filled, insanity-inducing breakdown before calmly returning to softer medleys and then descending into the gentle melody that we were first introduced to in “White Materia: SIderal”. This gradual descent into simplistic, layered, melodic beauty results in a near-ghostly effect that is guaranteed to leave you with chills running down your spine and the hairs on your neck standing on end.

It’s impossible to pick out any stand-out tracks on this album, as each track can stand on its own. What’s most notable is the mirroring that can be heard between “White Materia” and “Black Materia”. The instrumentation on both tracks is reciprocal and complimentary to each other, creating a harmonious “yin-and-yang” effect.

Overall, Amber Sea’s Infantile Vision is one of the most timeless and dynamic releases of this year. It’s hard to believe that this is a debut release, given that Infantile Vision bears the collective weight and experience of a thousand waves. Each member gives their all for an extraordinarily consistent, brutal delivery both vocally and instrumentally. Every verse, solo, breakdown, hit, and kick is perfectly crafted to induce an addictive, rib cage-rattling quality that will leave you breathless and bruised. You can’t help but lose yourself physically and mentally in the gorgeous instrumentation in every ear-shattering melodic solo and every bone-shattering breakdown. Amber Sea carries the technical prowess and youthful recklessness that only the most seasoned waters can hold. Today, the sky is red and Amber Sea’s Infantile Vision is the storm that is lurking on the horizon. (Katt Hass)

For Fans Of: Architects, Monuments, Periphery