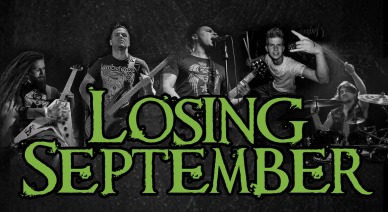 Check out their “American Hero” music video and the tour dates below!

“This was one of the most stressful videos to shoot for sure.  We had to take multiple takes of us getting shot by a host of paintball guns from about 10 yards away while blindfolded. It was the first music video off of our new 5 song EP called American Hero, so it had to be a little more daring than our other music videos we’ve done. We wanted to push the envelope a little bit mroe on this one.” – Nick Foreman (Lead Guitarist)

Losing September is a group of modern day pirates with tires and gas in place of mast and wind. An American hard rock band that formed around 2002 around a youthful Bruce Fane. After many lineup changes, the group is currently made up of Bruce Fane (vocals / rhythm guitar), Nick Foreman (lead guitar), Zach Drane (Bass), Nick Figley (Percussion / rhythm guitar), & Ben Bauman (Drums). Losing September released their 5 song EP called, ‘American Hero’ internationally on iTunes on Aug. 18th 2015. They will release their 3rd full length studio album called, “Rise Of The Loser” in late 2015. Their music video forAmerican Hero is the first single off their new album.