Imminence Records’ emerging alternative hip-hop artist Kinnecom has released the third single from his forthcoming second full-length album, entitled Motion Sickness.  “Oh My God, Shut The F— Up” follows in the footsteps of “Water,” which was produced by Nick Scott (I See Stars, Emmure, Slaves), and “The Band Begins To Play” for the album that is Kinnecom’s follow up to last year’s label debut Virtual Gravity (iTunes, AmazonMP3, Google Play, Bandcamp, Spotify, and Rdio) and his March mixtape Intermission (Bandcamp and YouTube). The album will be released October 30th as a pre-Halloween treat before the man Halloween tricks set to take place the next day.

Known for his time spent as guitarist in post-hardcore outfits Motiv (formerly named Motivational) and Wealth In Water, this solo project is the solo side project of Andrew Kinnecom. He wanted to bring something fresh to the genre as well as his life, including going as far as transplanting from North Carolina to New York City. His current project brings deep instrumentals and emotional soundscapes to modern music while challenging modern day mainstream artists with powerful songwriting. Both full lengths and his mixtape blends alternative hip hop, soul, RnB, and pop, among other influences, together to create a masterful soundscape that will please any music fan. 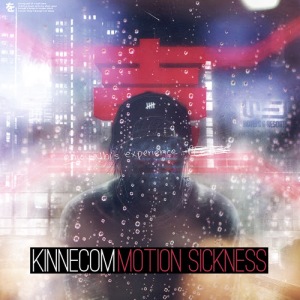 1. Motion Sickness
2. Ghost
3. I Woke Up In Your Head
4. Oh My God, Shut The F— Up
5. And We Drove
6. Water
7. I Feel In Love With Her Rain
8. Watch You Cry
9. Colorado Nights
10. Is That Too Much
11. The Band Begins To Play
Facebook|Twitter|Instagram|Tumblr
About Kinnecom
Emerging out of Raleigh, NC, alternative hip hop artist Kinnecom grew up performing and writing his own music at a very young age. He has written/recorded multiple albums, toured nationally, and worked with artists and producers nationwide. In 2011, Kinnecom recorded his solo instrumental album gaining him recognition from artists around the country. This recognition brought him to move across the country to record an album with Drew Fulk and sign his first recording contract with Indianola Records during his stint with post-hardcore outfit, Wealth In Water. After Wealth In Water disbanded in 2013, Kinnecom and fellow members formed Motiv (formerly named Motivational) before heading out on two national tours and recorded their debut album in mid-2014.
During that same timeframe, Kinnecom began work on his debut full length album entitled Virtual Gravity. The hard hitting album is blended with textural ambience, soothing vocals, and poetic rapping that brings his dynamic music to stand out in the music industry. Virtual Gravity plays as an outlet to tell Kinnecom’s story and his perspective on current social issues, uphill struggles throughout his career, and motivating messages directed to his listeners. By blending powerful songwriting and emotional soundscapes, Kinnecom defines cinematic hip hop. His debut album was released November 18th on Imminence Records. Quickly thereafter he released a free mixtape by the name of Intermission. During the summer of 2015, Kinnecom would move from North Carolina to New York City.