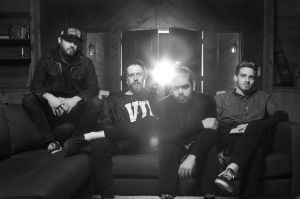 Atlanta, GA – Post-hardcore outfit Come and Rest have announced a new U.S. tour, with Roadrunner artist, More To Monroe, called “The Blacklist Tour”. The tour will begin in Nashville, TN on November 6th and will travel much of the southern states before heading up and down the east coast, finishing in Greensboro, NC on November 25th. View the tour flyer and check the dates below for a city near you.

“So excited and privileged to get back on the road for “The Blacklist Tour”. We love that we get to share our music and connect with new people each night. This tour is a celebration of the songs that we have written and the opportunities it has opened for us. See you out there.” – Vocalist, Noel Alejandro

“Come and Rest’s ‘Blacklist’ EP is a vibrant, passionate album that will easily burn and burrow its way deep into your ears. If you love smashing your face in to the likes of Vanna, Like Moths To Flames, and Barrier, then this album is for you.” – New Noise Magazine

About Come and Rest

Come and Rest is a four piece metalcore/ post hardcore band hailing from Atlanta, Georgia that formed in 2011. The name comes from a bible verse but was quickly morphed into a statement known as a safe haven for their fans to express themselves. The band aims to be the voice of their listeners and to encourage one another to follow the voice inside their heads.

The group, which consists of Daniel Goehring, Josh Harmon, Noel Alejandro and Mitchell Garrett, released their first EP, “Royal Blood” in February of 2013 after solidifying their sound and becoming a local favorite. The EP attracted a new online following for Come and Rest, giving their hit single “Upside Down” more than 10,000 views and gaining them new fans around the country.

Shortly after “Royal Blood” had been released, the demand of Come and Rest rose and the band started touring in regional and national markets on a consistent basis. This would allow the act to develop an intense and high-energy live performance, captivating audiences across the United States

About More to Monroe