Norwegian noise rock duo Barren Womb are teaming with Revolver to premiere a track titled “White Raven”, off their upcoming second album, Nique Everything. Check it out here: https://soundcloud.com/spartanrecords/3-white-raven/s-Z8Xzx

Timo Silvola (drums/vocals) tells Revolver, “The white raven looks quite different than other ravens. It is therefore shunned and looked down on by it’s own kind and falls easy prey to it’s enemies, making it the loser of the bird kingdom. It is truly the loneliest of all birds, never fitting in anywhere.”

Tony Gonzahl (guitar/vocals) adds, “The song bearing it’s name got started from a part that we had been kicking around forever and that, like the bird, never fit in anywhere. We had kind of thrown it in the vault and forgot all about it. Then one day we spontaneously started jamming on it and it all fell into place in a matter of minutes. We soon ended up with catchy stew of noisey rock and alternative country. That was one hell of a good day!”

Arguably their most defining album to date, Nique Everything, will be released on November 27th via Spartan Records.

Nique Everything is available to pre-order now on limited edition vinyl and picture disc at the Spartan Records store. View the album cover and track listing below!

Since 2011, Barren Womb have been raising both eyebrows and hell with their nasty swill of Punk ‘n’ Roll and Blackened Country Noise.

The follow-up to 2014’s critically-acclaimed debut LP, The Sun’s Not Yellow, It’s Chicken, Nique Everything, sees the band further exploring soundscapes, instrumentation, and themes more commonly found in Country/Americana than in Noise Rock. Yet it still retains every ounce of energy and conviction the duo has been known for in the past.

Look for the album on limited edition vinyl/picture disc and at digital retailers worldwide on November 27th and stay tuned to Spartanrecords.com and Barrenwomb.org for more info, new music, pre-orders, and much more. 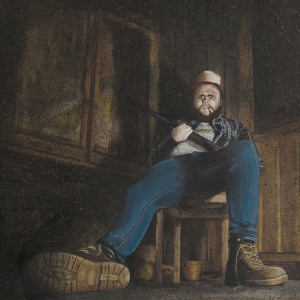 1. Make sure you get yr whole head in front of t…

5. Town’s back the way you came