The Ready Set (aka Jordan Witzigreuter) has been announced as direct support on the upcoming Tonight Alive/Set It Off co-headline ‘Fight For Something Tour’, along with Saywecanfly.

Ticket pre-sale kicks off November 3, with general tickets on sale starting on November 6. Check out the tour trailer here and view the tour flyer and full list of dates below!

Created in the basement of Witzigreuter’s childhood home in Fort Wayne, Indiana in 2007, The Ready Set has released three studio albums, 4 EP’s and a string of successful singles, including the hits, “Love Like Woe”, “Young Forever”, “Give Me Your Hand” and more.

Watch for a big announcement from The Ready Set coming soon, regarding plans for 2016. 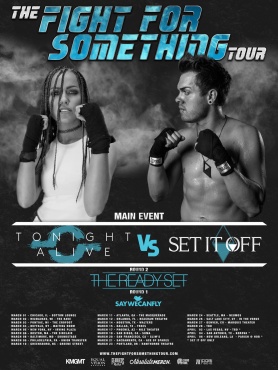