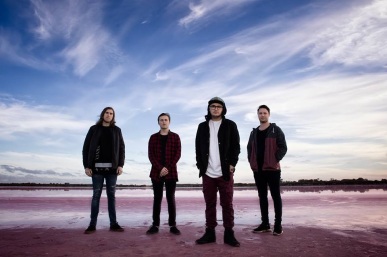 Australian hard rock band Awaken I Am has just released a new music video for their latest single “Landslide.” The song comes from their early 2015 release, Shields and Crowns which debuted #3 on the iTunes rock charts and #34 on the ARIA charts. With such a well received album release, the group has managed to do national tours with bands such as Dream On, Dreamer, Slaves and Emarosa, leading them to a constant growing fanbase.

Luke McKenzie comments, “We are very excited to release our latest music video for Landslide. We worked with our good friend Cian from Melbourne and shot it at Brisbane’s latest all ages venue Zephyr. It’s great to be able to support new venues in our hometown of Brisbane. This song is definitely a personal favorite of ours and a really great and well rounded representation of our album Shields and Crowns.”

Watch Awaken I Am’s “Landslide” music video below and make sure to purchase Shields and Crowns today!

About Awaken I Am

Australia’s hard rock act Awaken I Am have blown the earth off its course with its debut album Shields and Crowns released late March this year. The album, signed by Shock Records (AUS) and Zestone Records (US), debuted at #34 on the ARIA charts and reached #3 on the iTunes charts.

From supporting national tours with Dream On Dreamer, Slaves and Emarosa and sharing the stage with Amity Affliction, Parkway Drive, In Hearts Wake, Senses Fail and The Devil Wears Prada, Awaken I Am have shown that throughout the five years of hard work and sweat leading up to the release of Shields and Crowns, didn’t go unnoticed.

Internationally, the band have a significant following which continues to grow from the band’s ethic to push harder and farther. There is no limits to Awaken I Am, and Shields and Crowns is just the first segment of a very long and prosperous future.