Pop rock quartet Uh Huh Baby Yeah has debuted a lyric video for their new single “Natural Born Thriller”. The track comes from the band’s new EP Illuminasty, which will be released on 3/4 via Revival Recordings and is a follow-up to their 2013 release Trash Talk.

“Illuminasty is the culmination of 2 years of intense hard work on behalf of us, our team, as well as our friends,” says vocalist Kevin Fletcher. “We wanted to continue our evolution as a band with our next release and put out something that took what we did on Trash Talk to a completely different level. I feel we not only achieved that, but crushed it. Illuminasty is my favorite collection of songs that we have ever released by far. My hope is that you, the listener, thinks so too.”

The band will be celebrating the release of the new EP with the March Into Battle Tour alongside Assuming We Survive and Reckless Serenade. Pre-order Illuminasty via iTunes on 2/15 and hear the first single below. 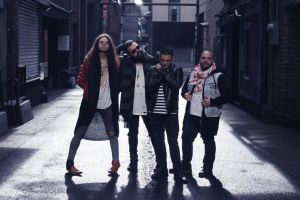 Uh Huh Baby Yeah! is an American rock band hailing from Louisville, KY. Singer Kevin Fletcher fronts the powerhouse quartet which also features drummer Sean Smith, guitarist John Braboy, and bassist Blake Stahlhut. The group’s insatiable DIY approach found them touring in support of two self released efforts; Till Death Do Us Party (2010) and Trash Talk (2013), the latter of which saw the band reach larger heights by selling over 12,000 copies without the support of a label.

After stints on both the 2013 and 2014 Vans Warped Tour, Uh Huh Baby Yeah! caught the eye of Raleigh, North Carolina based Revival Recordings, founded by Shawn Mike (Alesana). With Milke’s team on board, the band is set to unveil their highly anticipated debut EP in 2016. Produced and Engineered by Jeff Sahyoun (LetLive), Illuminasty hits hard and truly captures the unrelenting energy that is Uh Huh Baby Yeah!