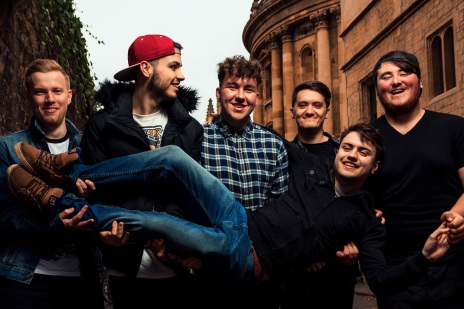 Formed in 2013, Better Than Never – comprised by vocalist James Harris, guitarist/vocalist Will Keating, guitarists Max Peniket and Jim Allsop, bassist Jake Aitman and drummer Kane McIntosh – have been honing their lineup (“The reason we have 3 guitarists is because we wanted our friend Will in the band but there was no space, but we’re nice guys so we made it work” – James) and their songmanship, via an extensive trial and error process at James’ home recording setup.

Having finally crafted a set of songs primed for the full studio treatment, the sextet booked time at the hallowed ground of The Ranch Production House in Southampton, to set about recording what would become their debut E.P proper, Homemade Hero. “We had 4 specific songs in mind that we wanted to record, but as time grew closer, it dawned on us that actually, we didn’t want to record those songs at all,” recalls guitarist/vocalist Will; “So, a couple of months before we went in we got together at James’ flat and started to retrack ideas and parts. Over time we settled on 3 new ones we really dug, and a re-recording of a previous demo track.”

A little down to the wire perhaps, but Homemade Hero sounds far from cobbled together. “We’ve always found it best to avoid the ‘rules’ when it comes to writing songs,” explains James, “It’s really easier to sit their and feel you have to write/sing/play something in a certain way because it’s “pop punk”, but we found that adding influences from places and styles you might not usually hear has helped to sort of create a different, yet familiar feel to our music.” With lyrical themes ranging from teen romance gone awry to, erm, Prison Break, Homemade Hero has character in spades, and will surely see Better Than Never making their mark on the UK’s thriving pop punk scene.

Better Than Never Released Homemade Hero on February 19th 2016 via Fox Records. Get it here:

May 13th @ The Flapper, Birmingham