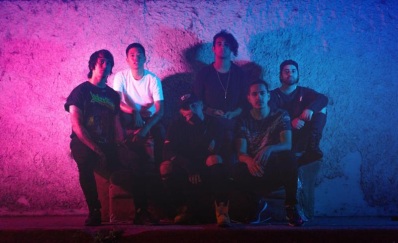 Iselin, NJ | March 7, 2016 – It’s been just over a year since Jersey-bred self-proclaimed “sadtrap” band Palisades released their smash hit album, Mind Games. The record, which dropped in January 2015 viaRise Records, solidified the band as genre-melding masters, fusing a myriad of genres including post-hardcore, electronic, and urban alternative influences. Mind Games hit #2 on the iTunes Rock Albums Chart, #30 on the iTunes Albums Chart, and debuted at #2 on the Billboard HeatSeekers Chart. Since then Palisades have been touring extensively in support of the project, bringing the new tunes live to fans in the US, Europe, and Japan. Over the last year the band has kept writing, recently unveiling a new track for fans to enjoy, “Fall” (watch HERE), and also welcomed two new members: Brandon Elgar on bass/vocals and Grammy Award winning producer, graves as their new DJ/producer (Kanye West – “My Beautiful Dark Twisted Fantasy”). With the new song gaining steam and lineup in place Palisades have taken to the road again. They can currently be found trekking the US with fellow Rise Records act, SECRETS, and will be heading to Europe for a short stint with Slaves – see tour flyers below for dates.

Based in New Jersey, the fun loving, dance inducing, post-hardcore/EDM fusion band know as Palisades flourish in the concept that music is universal. This left-of-center sextet strives to have fans of all walks of life colliding together in the enjoyment of sonic art. Consisting of Lou Miceli (vocals), Matt Marshall (guitar), Xavier Adames (guitar/vocals), Aaron Rosa (drums), and Brandon Elgar (bass/vocals), and graves (DJ/producer); Palisades developed a sound that resembles a mash up of Linkin Park meets AFI, also blending influences such as Limp Bizkit and Kanye West.
In 2011 the band unveiled three singles off of their debut EP, I’m Not Dying Today, which grasped the attention of Rise Records, who released the EP in February 2012. After Palisades’ success with their inaugural release, they began touring heavily, hitting the road with The Air I Breathe, My Ticket Home, and Hands Like Houses on the 2012 Rise Records Freshman Class Tour. With their incredible live show catching lots of attention, Palisades was then invited to join The Started from the Bottom Tour with The Word Alive, I See Stars, and Crown The Empire.
Palisades critically acclaimed debut full-length album Outcasts, was released on Rise Records in 2013. The record was a huge triumph, reaching #4 on the iTunes Rock charts, #7 on Billboard’s Hot New Artists chart, and debuting on the Billboard Top 200 lists. The band continued their monumental success with a music video for the album’s lead single, “High and Low,” garnering placement on MTV Clubland, and showcasing the energy that they infuse in their live shows for television and viral viewers. The band has had the opportunity to tour and share the stage with other artists they admire including Breath Carolina, Get Scared, Set It Off, Hands Like Houses, Silverstein, We Came As Romans, Like Moths To Flames, Our Last Night, and more.
For their sophomore LP, Mind Games, this genre-bending group tapped producer Erik Ron (Panic At The Disco, Foxy Shazam) to further cultivate their electrifying, signature sound. Mind Games wasreleased on January 13th, 2015 via Rise Records to an overwhelmingly positive response, reaching #2 on iTunes rock chart, #30 on iTunes’s overall albums chart, and #2 on the Billboard Heat-Seekers Chart.
Facebook | Twitter | Youtube