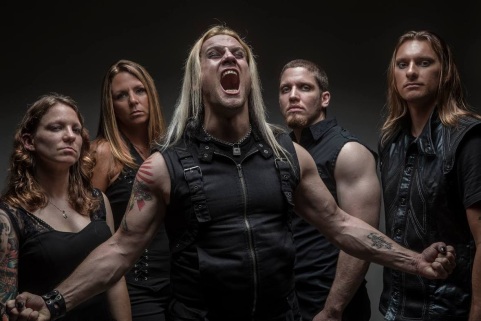 Right joyous are we to behold his words,

I recently had the pleasure of speaking with Crossing Rubicon’s lead singer, Scotty Anarchy. An accomplished vocalist of many years and a lover of visual and aural arts and Shakespeare, Scotty has proven himself a heartfelt and dedicated vocalist- and a force to be reckoned with. In this interview, Scotty and I delved into some of his personal and musical histories, what’s next for Crossing Rubicon, and a bit about their latest album, No Less Than Everything. Given his love of Shakespeare, I decided to throw him a bit of a curve: each question put to him was written with a Shakespearean spin!

I must preface this interview, Scotty,
With a brief explanation o’ th’ q’s:
Aware am I your love of Shakespeare’s works,
Thusly, I’ve crafted each question to fit
Such a man’s great fanaticism best.
Though it may read odd to you and others,
It is my sincerest hope that you will
Relish in some joy in answering these.

OTH!: So, first, tell us a bit about thyself!

Scotty: “Ouch That Hertz doth protest too much, methinks.” I am Scotty Anarchy Wawrzyniak, lead singer of the melodic metal band Crossing Rubicon. I love mostly all forms of music except modern country and gimmick bands. I love movies, comic books, theatre- anything that makes you think and feel. Art that makes a statement is what inspires me and I want to inspire others in the same way.

OTH!: Anarchy, Anarchy. Wherefore art thou “Anarchy?” (How did you get your stage name?)

Scotty: Oh, God, the dreaded stage name story, haha. 10 years ago in my wilder youth, I was playing a show with an old cover band Branded Soul, and I said something that got the crowd pretty riled up. They were going into full riot mode. To calm the situation, I was detained by the Bristol PD. One officer said, “You’re just Mr. Anarchy, aren’t you?” To which I responded, “I AM Anarchy, Scotty Anarchy.” The officer laughed his ass off and I figured if a cop who had me in cuffs could get a kick out of it, it must have a pretty good ring to it (and now you also know one of the reasons why I am clean and sober). I also figured it’s better than people saying, “That’s Scott Whatchamacallit guy.” Anarchy is simply easier to spell and remember. Besides, it kind of fits my personality.

OTH!: Let us speaketh upon thine’s histories in music: How did you get your start in vocal music and performance? What made you realize you wanted to sing in a Hard Rock/Metal band?

Scotty: I have been writing songs and singing since I was 3 years old. My father got me into music practically right out of the womb and my parents supported me in following my passions. I loved writing and performing. I followed with theatre and even choir when I was a kid, but to me, there is no greater expression than hard rock music. Rock music was there for me when I went through my toughest times in life. It actually saved my life on a few occasions and it was my best friend at times, and I am a big believer in paying it forward. Metal is my religion.

OTH!: I couldn’t help but notice the Shakespearean reference in your band’s name. Julius Caesar– when Caesar crosses the Rubicon after being warned that doing so would be a declaration of war; effectively passing the “point of no return.” Wouldst it be safe to say that Julius Caesar is your favorite Shakespearean work?

Scotty: Caesar is one of my faves; the song “Cut Deep” is based on Mark Anthony’s speech from Julius Caesar. Our song “Do We Not Bleed” references Merchant of Venice as well. The title track of our previous EP was “In Pains Of Sleep,” from Samuel Taylor Coleridge’s Pleasure Dome. I like referencing other artists’ work in my writing, in a way to make some of the song themes timeless. I don’t just get inspiration from renaissance writers either.  This album has 2 songs inspired from comic books as well.

OTH!: Whilst we’re still on th’ topic of crossing the Rubicon, pray, answer me this (and satisfy my curiosities): what was your “point of no return” in relation to music and Crossing Rubicon? I take it you wouldn’t have chosen this phrase as your band’s name if you didn’t have some personal connection with it.

Scotty: Crossing Rubicon’s initial plan was to write and record an album after my doctor and therapist both told me that change my lifestyle of drug and alcohol abuse, I was going to be dead in a year.  The songs I was writing were very personal and the details were about things that I was terrified to have people find out, but I also realized that to write songs everyone else could relate to, I had to “cross the Rubicon” and just say what I was initially too scared to say. The album was originally going to be called ‘Epitaph,’ and was going to be my swan song. as Crossing Rubicon became more successful, I had gone sober and [I] had a new lease in life, so now I want to help others to do the same.

OTH!: Forgive me my foul off-topic-ness, but I… I have to ask this: is it true that you Connecticut folk call liquor stores “Package Stores?”

OTH!: Shall we turn back to speak upon your music once more? I have to say, I really appreciate the nostalgic ’80s metal throwback that you put forth in your music. It’s- sadly- a style that is so infrequent in today’s modern “hard rock” that I feel it becomes sort of forgotten. Which, in turn, means that it ends up going largely unused, despite its versatility (which No Less Than Everything definitely demonstrates). What drove you and your band to integrate that classic ’80s metal sound?

Scotty: We write most of the songs as a group and everyone brings their own influences to the table. Zach Lambert brings some heavy riffs up, but Brandi is a solid rock drummer, and I am more of a power metal type vocalist, so you infuse all those styles together and it becomes Crossing Rubicon. Jeanne and Jesse’s styles are going to push our music in even different directions for the next record,too, but once Brandi and I put our parts into it, it starts to take on that sound that some classify as ’80s.

OTH!: Speaking of No Less Than Everything– what an aptly titled album. I’ve listened to it backwards and forward- it rings perfectly clear as is the summer’s sun that you all put “no less than everything” into your music and into the making of this album. Can you tell me a little about the writing process for No Less Than Everything and your personal stake in it?

Scotty: The rules in Rubicon are that there are no rules. Zach, Matt, or myself would come to the studio with either an idea or a complete song and, collectively, we work it out by putting our own personal touches on it. Everyone collectively writes each song, so we share writing credits evenly. We all can call each song our own- not many bands do that. The next album already has 4 members bringing ideas to the table and that is already getting exciting!

OTH!  -Dropping the Shakespeare act for a bit (sorry, mate)- I know that to a musician- especially one of your caliber- every song is like your child, but if you had to pick a couple of favorites to perform off of No Less Than Everything, which would they be?

Scotty: I like performing the songs that are the most personal. Performing “Bittersweet Day” is a religious experience for me. I wrote that song in jail the night I chose to go clean and sober, and take my life back. “The Fallen” is the other favorite. We had some ups and serious downs [while] recording this album. I had surgery for throat cancer and had gone through a divorce. We lost a very close friend to the band and a fan of ours to cancer. We were all tested on just how important music really is, and that period is what “The Fallen” is all about. I still need a minute to emotionally recover after playing it.

OTH!: All the world’s a stage, Scotty, so what’s next for Crossing Rubicon? Any upcoming tours at all? Or perhaps music videos?

Scotty: The official music video for “Unhinged” is coming out very soon and we are going to be headed out on the road in June with our friends in Caustic Method (great band our of Syracuse, NY and fellow Pavement Ent. band).

OTH!: Alright, I always like to end my interviews with something a bit more silly. let’s say you’re stuck in a room with Shia LaBeouf and he just keeps screaming at you (complete with gesticulations), “JUST. DO IT. MAKE YOUR DREAMS COME TRUE. JUST… DO IT!” over and over again. It becomes clear that he won’t relent until you “just do it”- whatever it is. My question is this: what is it that you do to get him to shut up?

Scotty: Inspire other bands to go out and change the face of the music industry by creating music for people to relate to and can be inspired by, and not for Instagram likes. The music industry acts like a bunch of spoiled rich kids stabbing each other in the backs for “status.” Music is for people who spend their hard earned money to get an album, or a T-shirt, or a meet and meet and greet- these are the people that really matter. My dream is to make music matter again and we need to go a little punk to make that happen.

Thank you for taking the time to speak with me, Scotty! Before I let you go, is there anything else you’d like to say?

Scotty: Support local and regional music; go to a venue! The best bands in the world can be found in your neighborhood. Put your iPhones down and your devil horns up!

Crossing Rubicon’s No Less Than Everything is out now via Pavement Entertainment on iTunes and Amazon!