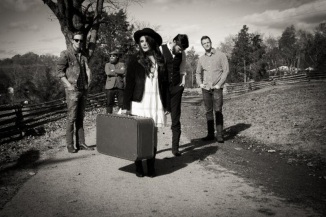 NASHVILLE, TN| MARCH 8, 2016 – After raising over $10,000 with a successful #FundTheFolk Indiegogo campaign, Nashville-based Americana/Folk outfit Roanoke [for fans of The Civil Wars, The Head and the Heart, The Lumineers] is thrilled to announce the official release date of their debut self-titled album, set for 5/13/16. Roanoke is an album filled with modern yet vintage tunes that make the audience sit and listen to a back-porch tale in true Americana fashion.  The stories told in Roanoke are relatable, real-life tales of struggles, adventure, love, and heartbreak, such as “Heavy Goodbyes,” which is about coming to terms with having to leave someone you love, or the deep message in “Jordan,” which touches on struggles with faith. Roanoke set out to send their audience through a wave of emotions with this album, not just sadness or melancholy. Roanoke also features fun, upbeat tracks about love and adventure.  Here is what the band has to say about their debut album release:
“Our hearts and souls are in this record. We wanted to tell a story, for people to become a part of that story, and we believe folks are really going to connect with these songs. From the harmonies to the instrumentation, even how certain tracks were recorded, this album was crafted by us to be as evocative as possible. This is our first record, our introduction to the world, and a chance to make our unique mark on a rapidly growing genre. We are thrilled to finally get our music into the hands and ears of our fans, and anyone who appreciates honest songs performed with compassion and unbridled spirit.” – Roanoke
Watch The Live Video for “Heavy Goodbyes”: 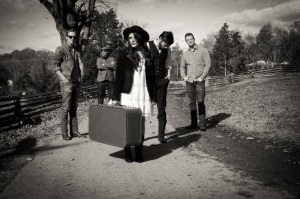 Roanoke is a rising folk/americana band based out of Nashville, TN. Lead by Joey Beesley (lead vocals, guitar) and Taylor Dupuis (lead vocals), the two come together to create rich harmonies and unforgettable songs of love, heartbreak, and exploration. Joined by band members Zach Nowak (mandolin and vocals), Kyle Breese (drums, banjo, and harmonica), and Jo Cleary (violin), Roanoke uses their undeniable musical chemistry to create a unique and captivating sound full of cultural influences, roots instrumentation, and catchy, memorable melodies. Their debut album Roanoke is an invigoratingly classic Americana album filled with heavily emotional back-porch tales that pull on the heart through lyrical storytelling. Roanoke has struck a balance between the narrative songwriting of folk, the ear candy appeal of pop, and the roots authenticity of country music and are set to shake the alternative Americana folk scene in no time.