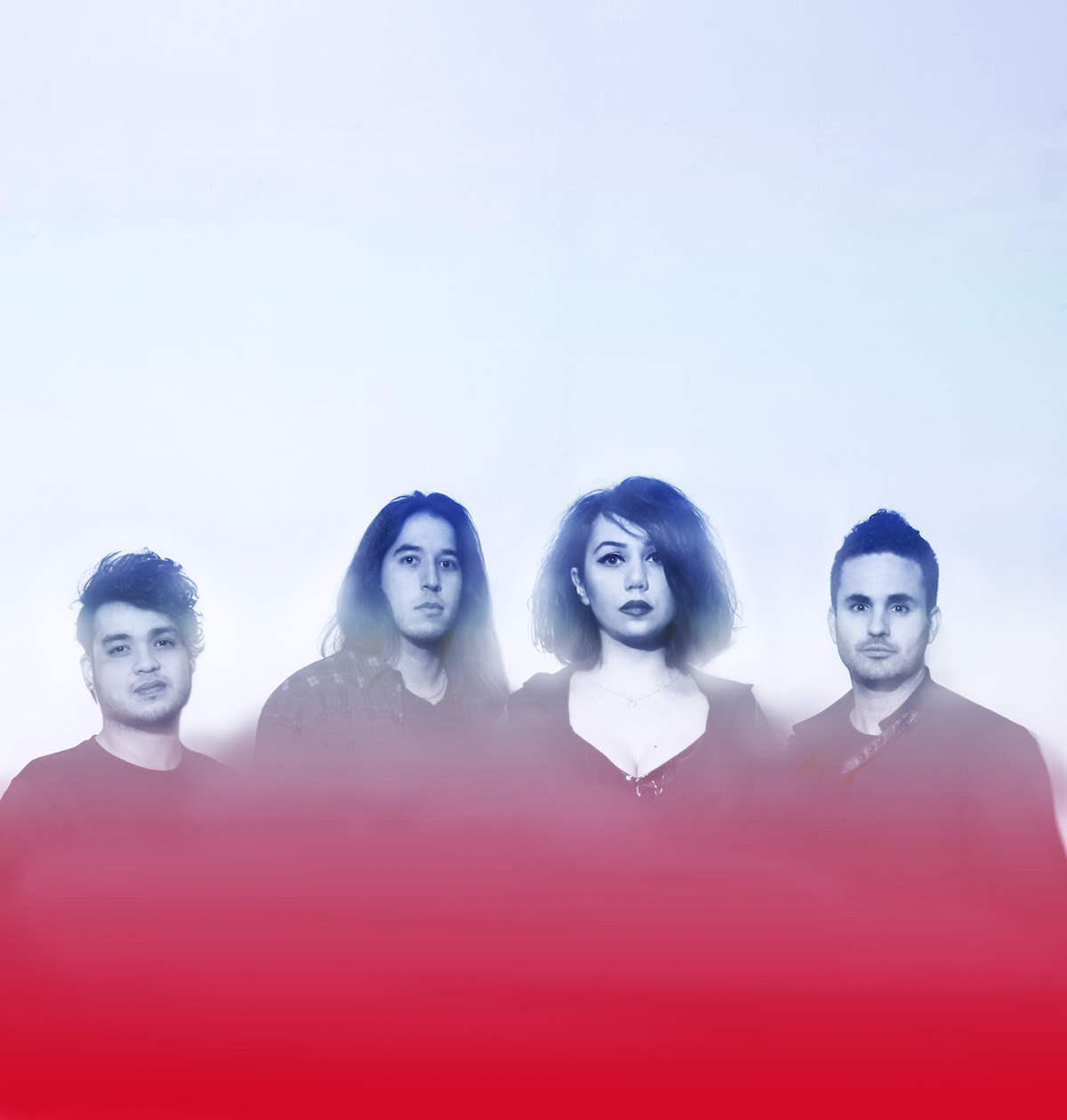 (April 18, 2016) – New York rock act CILVER will head out this spring serving as direct support for rock supergroup Sixx:AM, featuring Motley Crüe bassist Nikki Sixx and former Guns N Roses guitarist DJ Ashba in May.  “We are extremely excited to play with Sixx:AM,” says frontwoman Uliana. “We are huge fans and we are extremely honored to be sharing the stage with them. Be warned, it will be a steamy night of RNR!”

The band has also announced a new batch of tour dates around their impending release. CILVER will participate in this year’s WJRR’s Earthday Birthday and 98 Rockfest with the likes of 311 and BREAKING BENJAMIN. They’ll also be on the road with HALESTORM and LACUNA COIL for a handful of dates in mid May. Click here for all tour dates.

CILVER will release Not The End Of The World on April 29th, 2016 via Entertainment One (eOne), the first since signing with the indie label last year. The band’s own Leon Lyazidi produced the record with help from well known producer Johnny K, who executive produced.  The band is eager to release their songs to the world, the band spent a good portion of the spring locked away in Groovemaster Studios in Chicago.

“This is the perfect time to release this record,” says Preotu. “A time where America is angry, frustrated, lost, but hopeful.  The songs are honest and biographical to the point that every lyric made me cry as it transported me to important and memorable moments of my life. Moments of loss and hope, moments that every citizen and immigrant can relate to.”

Uliana was recently featured in the Hottest Chicks in Hard Rock issue of the magazine and calendar. After a series of radio festivals and showcases, CILVER then found themselves on a boat with Motörhead for the Motorboat Cruise this past fall. In similar fashion, the band also participated on the ShipRocked Cruise this January, which sailed from Miami to the Bahamas.

Anchored by songwriting duo Uliana and guitarist Leon Lyazidi, the band has come a long way from their previous projects in New York City. What served as an artistic restart has turned into a runaway train of accomplishment that seems to be going faster as time goes on. The band signed a new deal with eOne Music last year. “eOne is real,” says Leon. “When we set out to launch Cilver, we were looking for people who ate, slept and bled music just like we did. eOne was clearly a cut above everyone else and we couldn’t be more excited to be part an amazing roster, led by a passionate and creative team.”

New York City’s CILVER is more than a rock band: In many ways, they’re the embodiment of the American Dream. For starters, the powerful musical collective showcases the brilliant synergistic possibilities that unfold when a confident, determined woman is paired on equal footing with a multifaceted male collaborator.

Their breakthrough single, “In My Head,” deconstructed the false images of beauty, perfection and success constantly force-fed through advertising, television and the web. CILVER challenges the rock n’ roll status quo as smartly, ably and swiftly as like minded mega-sellers and radio tastemakers Halestorm, The Pretty Reckless and Lacuna Coil. They do so with a unique artistic voice, on their terms, with battle scars to show for it.

“We definitely have something to say. We carry a strong message, which comes from the experiences we’ve had, especially the things I’ve been through personally,” says singer Uliana Preotu, “Our lyrics are loaded with more than the average rock song.”

In breathtaking, head-turning, seemingly swift fashion, CILVER built a wave of momentum large enough to swallow the hard rock scene. The surge kicked off in early 2013, when Preotu and guitarist/co founder Leon Lyazidi got together with guest Ron “Bumblefoot” Thal (Guns N’ Roses, Art Of Anarchy) for their debut single and video. Bassist Josh Pillbox and guitarist Ramsey Modiri – all well educated, in both musical training and in the school of life – came into the fold later.

By the early months of the following year, the duo put a full band behind them, plus a 4-song EP, and set about pushing their message of strength through adversity and success on one’s own terms on Revolver Magazine’s Hottest Chicks In Hard Rock Tour (with Sick Puppies, Lacuna Coil and Eyes Set To Kill), at festivals with Alice In Chains, Rob Zombie and Stone Sour, and on additional dates with Devour The Day and Lacuna Coil, who invited the band back out as main support. Several management firms and record labels were in hot pursuit, before the Cilver elected to sign with The RSE Group (Slayer, Mastodon, Gojira) and eOne Heavy, to partner with them for their burgeoning future.

While they seemed to have come from out of nowhere, the truth is that the duo had toiled away behind the scenes, paying dues in clubs and bars in various incarnations.

CILVER’s creative core had it all going for them in their last band prior to this one, but they refused to settle for anything less than a principled authenticity in their expression. They had major label backing, big management, and dedicated fans, but the pair weren’t happy with the creative direction, and abruptly called it off. People said they were crazy, but as CILVER has proven, they were nothing short of clairvoyant.

“We went back to what we initially set out to be. We stood strong in our position about who we really are and how we want to communicate with the world,” Preotu says.

Preotu was born during the last days of communist rule in Romania. “I was one of those kids standing in line for food rations every month. I’ve had a long road from there to here. I have a darkness that follows me, because of the things I’ve seen growing up. That darkness comes across in the music that we make, because that’s exactly who I am.”

After the death of her father, Preotu’s mother remarried and came to America. She didn’t even speak English yet when she arrived, but Preotu triumphed over all of her hardships. As she began searching for like minded musicians to play music with, she encountered something of a kindred spirit and similar work ethic in Lyazidi, who has a master’s degree in business (and continues to be a voracious reader). When the pair met, he was fronting his own band, but had yet to really it off the ground.

“I knew it was time to step aside and find somebody to front the band,” he recalls. “She walked into an audition and I was the only one that was like, ‘that singer. She’s the one!’ She couldn’t even speak English yet. She learned how to speak English onstage playing for people in New York City. This is kind of a recurring theme with us – there are often non believers, but we always stick to our guns and follow our intuition.”

The duo speaks more than a half dozen languages between them, ‘though their most evocative language is the creative one on the stage. “Uliana and I were both born overseas. I moved to America when I was younger,” Lyazidi explains. “I definitely had the immigrant experience, in terms of having to work that much harder, and so did she.”

Vietnamese, Cuban, and Russian are among the multiple ethnicities within CILVER, giving them a strong connection with fans worldwide, and making them that much more all-American, like a hard rock X-Men or Fast & Furious ensemble. The band’s founders are both first generation immigrants; the rest of the group is second generation. “The thing is, we love rock n’ roll and rock n’ roll was born in America,” Preotu points out.

About five years ago, she lost her mother (who was uninsured) to pneumonia. “I found myself kind of an orphan in New York City. Music was what kept me going. It saved me. I didn’t really have a feeling of belonging anywhere, but music has given me that.”

As the band prepares to complete their full-length debut album, produced by the bands very own, Leon Lyazidi, with help from executive producer Johnny K (Disturbed, 3 Doors Down, Megadeth), it’s that feeling of belonging and inclusivity Cilver hopes to share with anyone who feels trapped, alienated or alone.

“Don’t be afraid to be who you are. A lot of people say that, but not everyone is really taking the message to heart,” Preotu says. “As a woman in the rock business, I want to empower other women, too. Rock n’ roll is a very male dominated world. We want to encourage people to truly dare to dream, and to fight tooth and nail for those dreams.”

This type of forge-your-own-path and defy-conventional-wisdom-against-all-possible-odds mentality is what the United States is all about. Lyazidi sums it up thusly: “We come from all different parts of this world. We love this country, we work hard for it, and we write music from a lot of different angles. There’s pop, there’s metal, there’s songs about depression, the death of loved ones, about struggle.”

“To be honest with you,” he concludes. “We are the very definition of America.”