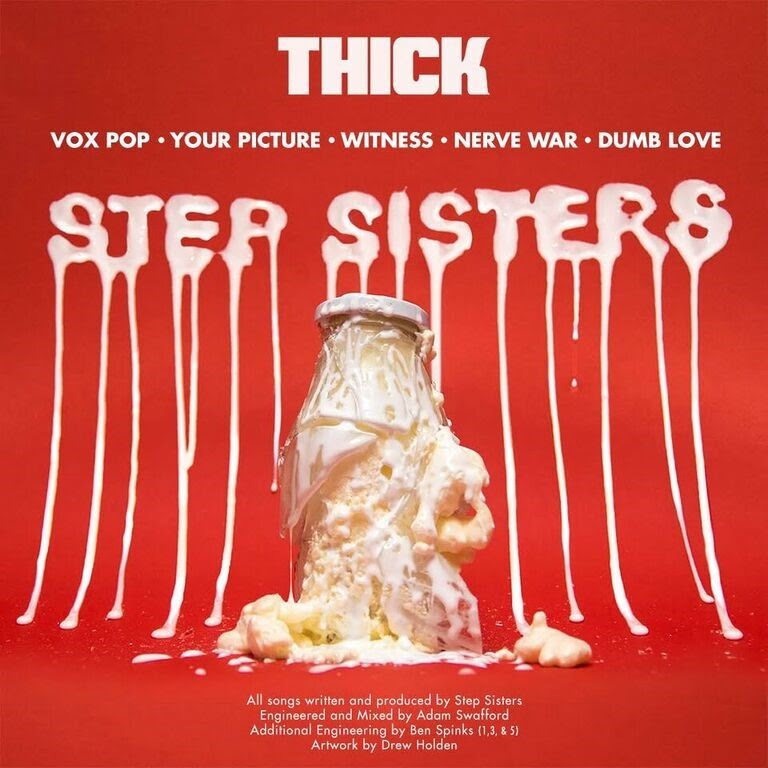 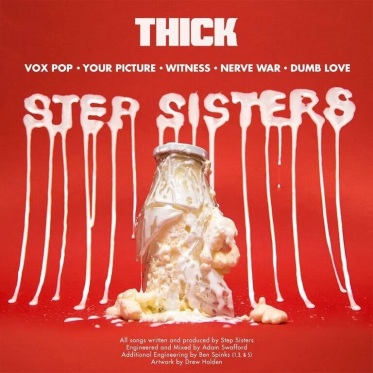 I grew up on bands like The Stooges and MC5. To  me, those bands always embodied the sound and attitude of where I grew up, and the buzzword around the city was always the term “garage rock.” In my book, that term always meant psychedelic rock with an attitude. It’s rough around the edges, but still manages to blow my mind and melt my face.

When I was sent Step Sisters’ most recent EP, Thick, it seemed like it was right up my alley, and for the most part it is. It’s an EP that’s easy to digest despite its album cover, lactose intolerants need not worry. Step Sisters are a four piece garage band from Tennessee.

What Step Sisters succeed in most is attitude. Attitude is the most crucial component in any garage rock band, and they nail it. From front to back, the guitars, drums, and bass are played with unmatched conviction. This EP clocks in at exactly 20 minutes, and not a single second is wasted. It’s short, sweet, and kicks your ass.

Thick is not limited to the metaphorical “Garage” though. The opening track, “Vox Pop,” dabbles in new wave, while other songs may give off brief hints of psychedelia. Step Sisters still manage to work the various genres they flirt with cohesively, making it easy to enjoy the EP front to back. It’s an admirable feat that’s easier said than, and I applaud the band for that.

The songwriting is probably the one thing that didn’t grab me. It’s not that it’s bad, per say, it’s just that I didn’t find anything in the lyrics that I latched onto. While lyrics are something I hold dear as I writer, I realize it’s also not necessarily the reason you’re listening to a record such as this. It’s also entirely possible that another listener could find something in the words for them. For me, this record is all about the jams.

Step Sisters are officially a band on my radar. I’m interested to see where they go next, only hoping they continue onward and upward. I hope they continue to push their boundaries and experiment with other styles of music. Thick is an EP that shows a lot of promise in the growing garage rock scene. (Johnny Athey)