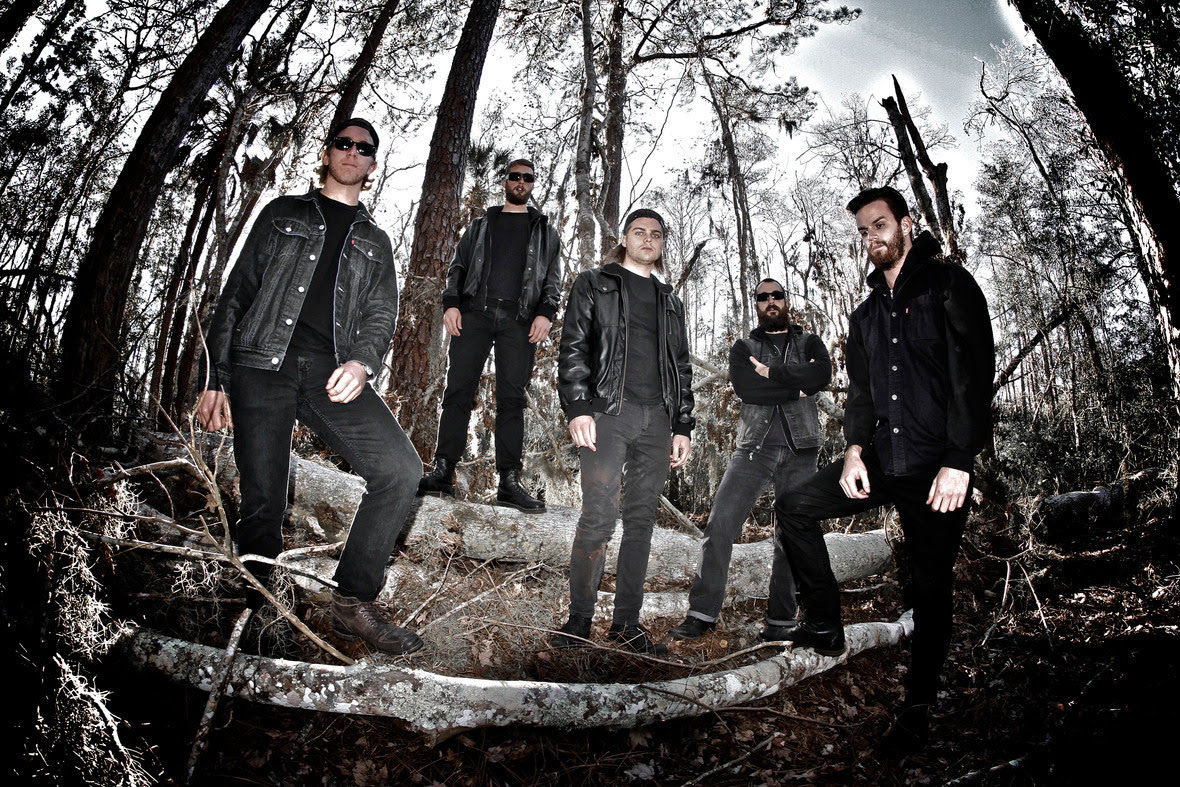 (May 11, 2016 – Tampa, Florida) – Dark Sermon has announced the dates of their upcoming U.S. headline tour featuring special guest Exalt. Dark Sermon will be touring in support of their latest record The Oracle (eOne Music) which is available now on iTunes. The band is currently on tour with Thy Art Is Murder, Rings Of Saturn, & Fit For An Autopsy (The Coffin Dragger Tour) with the headline tour kicking off on July 5th in Atlanta, Georgia working it’s way throughout the U.S. wrapping up on July 30th in Orlando, Florida.

“It has been ages since we’ve headlined a full US tour, so it’s about time we made it happen again. We are excited to play a few new places in between hitting some familiar cities we know and love. Having Exalt along for the ride should make it a little more interesting for the audience as well.” – Johnny Crowder (Dark Sermon)

With Thy Art Is Murder, Rings Of Saturn, & Fit For An Autopsy (The Coffin Dragger Tour)

Dark Sermon, who came together in 2009, masterfully craft blackened but not bleak metal, with minimal production and lots of artisanal grit on their new album The Oracle. They are also a band that you absolutely have to see live, in the here and the now, not on a computer monitor or via a pair of speakers.

On record, Dark Sermon are destructive and gnarly enough to reduce you to quivering pile of flesh and bone, heaving and gasping for breath. But onstage? That’s where the band truly comes to life.

Additionally, Dark Sermon don’t want you to surf the darkest, most remote corners of the web to get to know them, either. That’s simply not the space that the band occupies—millennials be damned.

Vocalist Johnny Crowder declared, “If you don’t know how you feel about us, come watch our live show and base your opinion off of that. We always prefer that people’s first impression of us is seeing us live rather than watching a music video or listening to us on Spotify.”

Indeed, the interaction of the band members with their instruments, amidst a crowd and amongst fans, creates a scenario that crackles with electricity. But make no mistake—Dark Sermon’s music is entirely not suited for the digital world, where bite-sized information and sounds are digested and eliminated as some sort of informational waste, forgotten as quickly as they are found.

This is a band that demands the investment of time from the listener, and the return on that investment is tenfold.

The music on The Oracle, the follow up to 2013’s In Tongues, was recorded in Tampa, the death metal capital of the world, with Kenny Gil, who has known the band members since before Dark Sermon existed as an entity and therefore fully understands the Dark Sermon vision.

It doesn’t go down easy. It chafes, it slays, and it doesn’t let much light in, and that’s how most fans of true, extreme heavy metal prefer it. If there is a coffin for false metal, Dark Sermon are hammering the nails and there is catharsis in that.

“I think the darkness stems from honoring both sides of the spectrum,” Crowder said about the band’s aesthetic and their ability to purge while performing. “Yin and Yang, just like our name. There are infinite ways to deal with stress, frustration, negativity, anxiety, or just plain unsound energy, but writing and playing music that some people would term ‘aggressive,’ ‘dark,’ or ‘blackened’ seems to be the healthiest method.”

“Playing a show for us is like wiping the slate clean and starting fresh, every single night,” the singer noted. “It hits a reset button, and then we’re able to go back out into the world and wade through the relative filth, at least until our next show. The blackened vibe definitely draws a lot of influence from the subject matter we discuss in our songs, but it all just adds to the catharsis. It’s cleansing.”

And that’s why the fans will relate so wholly to Dark Sermon, who have toured with Chimaira, Wretched, Aborted, and have done 70,000 Tons of Metal and Barge to Hell treks, and The Oracle.

Crowder continued, “Our new material is very atmospheric, and it’s definitely something you need to experience in person to fully comprehend. Who we are isn’t something that translates well into Tumblr GIFs, clever tweets, or YouTube videos. It’s so much more complex than that. We have never been an Internet band, and I have a severe doubt that we will ever become one. This makes being in a metal band in 2015 a lot more challenging than it already is, as you can imagine.”

Eschewing the digital world and refusing to tap, tap, tap away on a touchscreen in order to force an inorganic connection with fans only serves to narrow the focus to what’s most important—the music itself. In a sense, Dark Sermon’s shows equal performance art.

Crowder said, “But there’s no question that actually being in the room with us when we play will do more for you in the way of understanding our art than sitting behind a computer ever could. We place an incredible amount of weight on our live show, because to us, the performance aspect is the most important part.”

With a laser-like focus on a strategically developed live show, the band doesn’t rely on anything but its gut and its own receptors—for pain, life, happiness, or whatever—to interpret the world around them. “We feel our way through things,” Crowder said. “Trusting your gut and doing what feels natural and right is how we operate. We don’t force anything; it all just happens organically. Writing this record had nothing to do with anything or anyone else besides the atmosphere and landscape we desired to paint for ourselves. We’re not a band that caters to what others want to hear, or even what others expect of us.”

That meant Dark Sermon controlled their fate and their destiny with The Oracle.

“We had no outside help in writing this record,” Crowder admitted. “It was an effort wholly concerted by the five of us. We make music because we want to express ourselves, and because we feel called to do so. No ulterior motives whatsoever. It’s instinctual.”

So if you are looking for high-profile features or for the dawning of a new style or a scene, well Dark Sermon think you need to look elsewhere.

The Oracle‘s musical malevolence is actually quite comforting. It’s a scathing listen, but one from which you will emerged both changed and awakened.

While the sound is brutal, there is an almost-terrifying depth to the subject matters that are broached.

“The Wraith” touches on something deeply personal and powerful. Crowder confessed that he has been a schizophrenic for his entire life, experiencing auditory and visual hallucinations. He tried to distill those incidences into music.

“The song is about being haunted by a cloaked figure that claimed to be a part of me,” Crowder admitted, diving deep into the intensely intimate subject matter. “The sound of the blade being sharpened repeats throughout the song, representing the auditory aspect of the hallucination. Any time it was quiet enough for me to feel alone with my thoughts, I would wind up hearing noises and voices that I knew couldn’t exist physically.”

He pulled back the skin even further, saying, “The break in the song has some of my favorite lyrics on the entire record, because it talks about how confusing the haunting is. Nothing is what it seems, and your physical reality is only a very small percentage of everything that surrounds you at any given moment. And when the visions you see claim to be you, you start to lose your sense of identity. I contemplated trying to attack the figure, but realized it would ultimately be harming myself because we are one in the same. Suicide is something I have honestly considered with conviction for a majority of my life until very recently, and it was an especially enticing option during the time I wrote this song.”

Then there is “Gargantua,” which may not be as devastatingly personal, but it’s just as impactful, as it philosophically ponders one’s place and significance, or lack thereof, in this world.

“The song is about traversing beyond the inner horizon of a black hole to reach what lies on the other side, which I postulate would be total peace,” Crowder said. “Most people know what an event horizon is—the point at which the gravity of the singularity is so powerful that not even light can escape its pull. The inner horizon is even closer to the singularity itself, and only exists in a portion of all black holes. Inside of a black hole that has a rotating nucleus, the inner horizon is the point at which everything being sucked towards the singularity collides with everything that is being flung outward by the perpetual motion of the rotation. This is home to the most ludicrously intense conditions that exist anywhere in our known universe.

“Picture two infinitely dense semi trucks speeding towards each other at infinite speeds. Complete and utter chaos. I also touch on how arrogant humanity can be when it comes to matters regarding science, dimensions, space/time relations, and our universe in general. Too many people think they know it all, when, in fact, they’re standing in their own way of even beginning to comprehend the vastness and incredible conditions that exist on our planet and elsewhere. If you think you know everything, that should tell you just how little you actually understand.”

Clearly, Dark Sermon and The Oracle are not for the faint of heart, weak of constitution, or small of mind. They are not programmed for the instant gratification digital era, either. Instead, they create metal that equals the weight of granite in both sound and scope.

Neither band nor album are an easy listen but those who make it out on the other side will find themselves thankful.