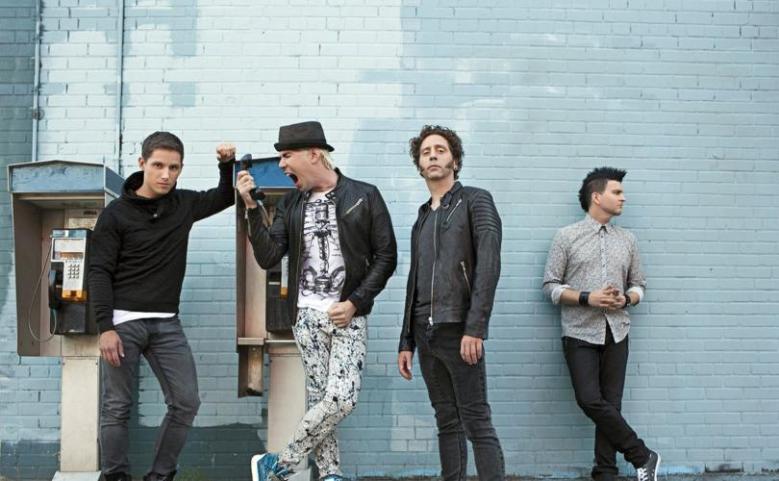 (MAY 18, 2016) – Multi-Platinum selling Canadian pop-rockers Marianas Trench have announced a summer headlining tour in the U.S., “SPF 80s”, which kicks off on July 8th in Oklahoma City, OK at the Diamond Ballroom. Presale tickets and VIP packages will be available starting on Thursday, May 19th at 10am local time. General admission tickets will go on sale to the public on Friday, May 20th at 10am local time. Go to www.marianastrench.net for more info and to purchase tickets.
The tour is in support of their newly released fourth studio album Astoria which echoes one part 1980’s fantasy adventure film and one part classic Marianas Trench. It honors classic coming of age stories, and reflects on front man Josh Ramsay’s own personal journey that took him from the highest high to the darkest point in his life and career. “This album is about completely falling to pieces, and picking yourself back up again,” Josh explains. “We took the hardest two years of my life and made it into something beautiful, and our best work to date.”
Excited to be performing in the U.S. again this summer, Marianas Trench enthuses, “America, we’re back. Grab your sunscreen, super soaker, and speedo ‘cuz things are about to get HOT. The Marianas Trench SPF 80s tour is coming to a city near you this summer and David Hasselhoff says, “You definitely don’t want to miss it!”
Since their 2006 debut album Fix Me, Marianas Trench have had two Certified Platinum albums in Canada (Masterpiece Theatre and Ever After) and many chart-topping hits including “Fallout,” “Haven’t Had Enough” and “Stutter.” In 2013, the band earned a JUNO Award for Group of the Year, adding that accomplishment to their multiple MuchMusic Video Awards. Ramsay also received a Grammy nomination in 2013 for co-writing and producing Carly Rae Jepsen’s breakthrough smash “Call Me Maybe.”
Below is a full list of tour dates for Marianas Trench’s SPF 80s tour. General admission tickets will go on sale to the general public on Friday, May 20th at 10AM local time! 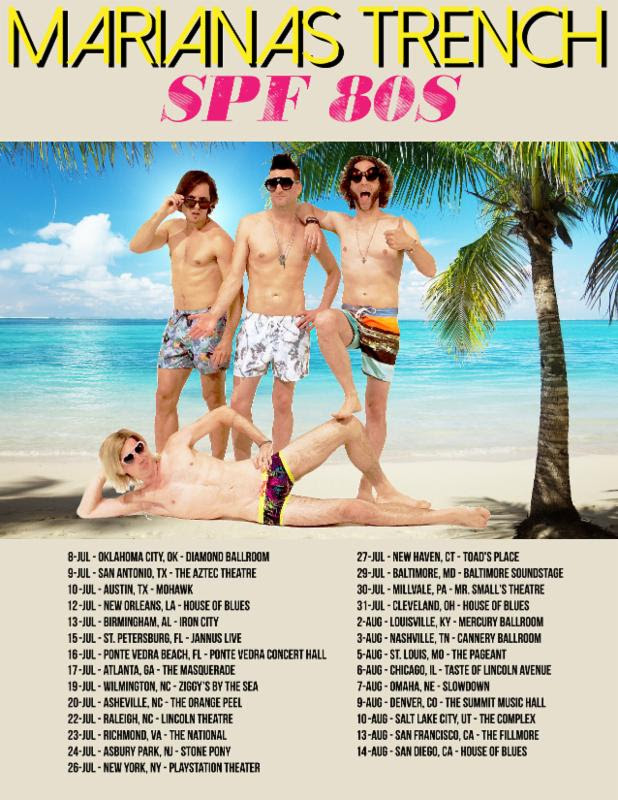 When Marianas Trench’s lead singer Josh Ramsay came up with the title Astoria, he saw the album as a concept record based on 1980’s fantasy adventure films; specifically The Goonies, which is set in the seemingly doomed town of Astoria, Oregon.

The idea was to let a classic coming of age movie inspire the music and overall feel of the record. Then, however, Ramsay had no idea the circumstances in his own life would result in a personal journey that took him from the highest high to the darkest point in his life and career. “A couple of years ago I felt on top of the world,” he says: “My band, finally, after years of work, signed a huge American record deal. We were headlining arenas in Canada. I’d been nominated for a Grammy for ‘Call Me Maybe,’ (Carly Rae Jepsen). I was engaged to the love of my life and it was like, this is my moment.”

Soon afterwards, Ramsay’s mother – who, along with his entire musical family, he credits as his most important influences – was diagnosed with Lewy Body Dementia – a debilitating, fast-acting “cross between Parkinson’s and Alzheimer’s.” That and the self-imposed pressure of writing and recording Astoria put him into a tailspin. “I worked myself into not being able to write at all. My mother got sicker. I wasn’t coping well and I became incredibly difficult to be around.” So difficult, in fact, his relationship with his fiancé deteriorated swiftly and ultimately ended.The pressure to start work on the next Marianas Trench record intensified even more, until, in early 2015, he was briefly hospitalized. “It was the lowest of my low moments, but then something shifted. I thought; I can’t make my mom better or fix my mistakes. The only thing in my power was to write Astoria, follow every artistic impulse I have and see where it goes.”

Within 24 hours of his release, Ramsay was in his Richmond, BC studio with new material pouring out of him, but ultimately moved, lock, stock and console, to his Gastown apartment, which he christened ‘The Benhouse Studio’ (named for his Labrador Retriever, who gets an executive producer credit on Astoria). “I thought why not record here? It’s more accessible and I liked the idea that the place I’d felt the worst in my life could maybe turn into the place I did the best thing I’ve ever done.”The band decorated the space with 1980’s movie posters and album jackets, and packed it with recording and instrument technology that would only have been available in the eighties. But while Astoria has a decidedly eighties feel, it’s far from a throwback. “I was trying to make the record as if I’d been a contemporary at that time. I pulled from that time in my own way.”

“Josh was like, ‘we’re going to live it,’” says guitarist Matt Webb. “He said: ‘I’m going to show up everyday in leather pants.’ So we tightened up our pants, threw tank tops on and pretended we were eighties rock and roll stars.”

Ramsay and the rest of the band researched sounds relentlessly, drawing on their large collection of vintage gear. “If we were looking for a part that sounded like the Eurythmics we’d find out what guitars, mics and preamps they used and sit there with giant grins on our faces when we got those sounds,” Webb says.

“What I wanted to do once I had the Benhouse set up was have people, musicians or not, who’ve meant something in my life, and get them on the record,” Ramsay says. Among them; The Odds’ Craig Northey, 54-40’s Dave Genn and Roger Joseph Manning Jr., of one Ramsay’s favourite bands, Jellyfish. “But my favourite thing is that Astoria ends with an a cappella refrain sung by my family, including my mother.”

With free form epics such as the opening title track and album closer ‘End Of An Era,’ emotionally raw offerings like ‘Wildfire’ and ‘This Means War,’ Astoria is a fitting follow up to Marianas Trench’s Platinum-selling, concept-based releases Masterpiece Theatre (2009) and Ever After (2011). Channeling influences as diverse as The Beatles, Queen, Tears for Fears, Michael Jackson, George Michael and Depeche Mode, among others, it’s Marianas Trench’s most ambitious record to date: unapologetically cinematic, constantly surprising and featuring lush orchestral textures that segue seamlessly into spare, but powerful songs like the standout ‘Dearly Departed.’

Tracks like ‘Shut Up And Kiss Me’ and ‘While We’re Young’ take on the best and worst moments of Ramsay’s recent life, but as deeply personal as they are, they’re the kind of songs anyone with a pulse can slip into and see their lives reflected in. And nowhere more so than on lead single, ‘One Love,’ which poses the question, ‘What if the one true love’s the only one that you get?’ “There’s not a lot of metaphor there,” Ramsay says. “It’s a bleak fear I feel, but at the same time it’s hopeful.”

While ‘One Love’ will resonate with virtually anyone on the first listen: “I wasn’t going for that at all. I didn’t give a fuck about people relating. I just did, artistically, what I wanted to, but it’s so lyrically candid I’m actually nervous; it’s like someone reading your diary. Still, the record has a lot of hope in it, too. It’s my personal best and the band is better than ever,” he continues; crediting guitarist Matt Webb, bassist Mike Ayley, and drummer Ian Casselman for giving him time to sort his life out. “Nobody pushed and I don’t think I’d have made it through without that support.”

On Astoria, the band members were more a part of the process than previously, and, more than ever, their four-part harmonies are a centerpiece of the record. “It’s like Josh creates a baby and we help pick out the clothes and give it a haircut,” Ayley says.

“But the process was really open,” Casselman puts in, “particularly when we were doing gang vocals with up to 20 people and Josh would say ‘just sing whatever comes to mind.’”

In the end, the band is closer than ever. “I don’t laugh as hard with anybody else,” Webb says, mentioning the band’s often hilarious entry to award shows in everything from oversized hamster balls to a bouncy castle. “Some of the ideas we’ve had have us in tears, laughing about how inconvenient and uncomfortable it’ll be, but one of the reasons we’ve remained so strong is we laugh, a lot.”

Although they’ve toured extensively in the States, when Astoria is released on October 23rd, 2015 on 604 Records in Canada and Cherrytree/Interscope worldwide, it will be their first physical release in the US, and the band can’t wait: “I feel like this is our best moment. For me, Astoria is the record of my career so far – at least until we start the next one and I go crazy again,” Ramsay says, laughing.Music industry professionals, journalist and artists alike are fond of saying ‘the album is dead.’ Now and again, however, a band like Marianas Trench comes along and puts the boots to that assertion. Put bluntly, each song on Astoria is as strong as the record as a whole and, like the very best of recordings, tells the raw, unvarnished truth, candidly and absolutely fearlessly.

About Marianas Trench: Since their 2006 debut, Fix Me, the Vancouver, BC-based four piece have had two Certified Platinum-selling records (Masterpiece Theatre, Ever After), chart topping hits including ‘Fallout,’ ‘Haven’t Had Enough,’ and ‘Stutter,’ garnered multiple SOCAN and MMVA Awards, number 1 videos on MuchMusic, and JUNO nominations, and won the 2013 JUNO Award for Group of the Year.

Over time Marianas Trench have toured relentlessly in Canada and globally; headlining tours in Australia and New Zealand, and the US. They’ve also headlined events at the 2010 Vancouver Winter Olympics and 2015 Pan Am Games in Toronto, as well as in the Philippines and South Korea.