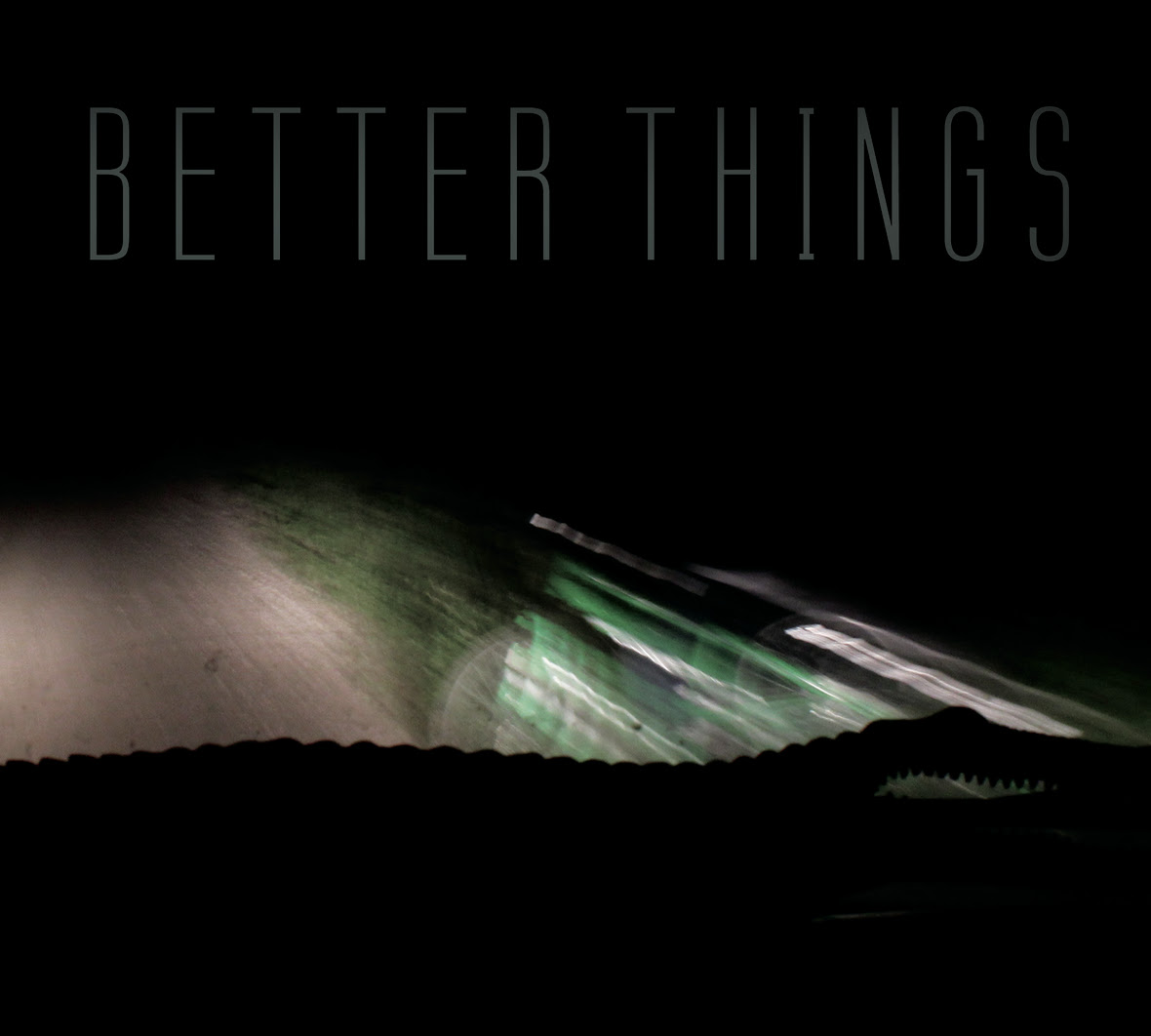 Imagine if you mixed the bouncy melodies of The Swellers with the soul-searching, melancholic lyricism of The Get Up Kids and the grit of A Day To Remember? Sounds like a really promising end product, eh? Well, I can tell you for fact that such an offspring exists and it’s everything that your inner sad self could ever ask for. And their name is Better Things. The Burlington, VT emo/alt-punk/alternative quartet has just released their debut LP, Getting Worse, today and we couldn’t recommend it more. Getting Worse is more than heavily emotive verses and disastrously reflective choruses. It’s the first gentle sip of coffee that you take in the morning. It’s the cigarette that you tenderly enjoy on your porch after a long day of work. Engaging, oddly soothing, and good ’till the very last bit.

We have the absolute honor of presenting to your eyes and ears the exclusive track-by-track of Getting Worse, penned by the band themselves! You’ll be taken deep within the albums finer cracks and rougher edges as Better Things plunges into the oftentimes heartwarming background, meaning, and process of each track. To better enhance your reading and viewing pleasure, we’ve embedded each track with its corresponding title description. So, sit back, relax, press “play,” and enjoy!

“Getting Laid in New Hampshire”

If you want to reach beneath the surface, “Getting Laid In New Hampshire” is a song about my personality being thrown in my face by someone close to me. I had to re-evaluate who I was to move forward.

Quintin had been playing this riff that wasn’t connected to anything, so when we started working on the song it was worked in there for the intro. There wasn;t necessarily a vision for the sort-of whacky dystopian storm thing that you can hear starting it off, but it continued to build into what you can hear on the album. In hindsight, it’s a big manifestation of what the album title could be taken to mean.

We think the song is very energetic and a great start to it all. It hits hard and the ending is so sudden that it leaves you thinking, “What the Hell just happened?”

This song tackles the feeling you get when you’re reaching out to someone for help. Sometimes, as much as you hear “everything will be fine in the end,” you can’t quite qrap your mind around that.

Musically we’re really happy with how different this song is from a lot of our work. Really heavy, some odd time signatures, tons of distortion, and big beautiful noise to cap off the ending.

“Casanova With A K”

“Casanova” was a very studio-built song. Before we went in and started working with Ryan, I honestly never felt that it held its own. There was one night I recall in particular where Ryan and I were the only ones in hte studio. He pushed me to do a bunch of harmonies to my own vocal tracks (something I’ve always been wary of) but after about a half hour of working through it, the verses finally felt like they belonged.

Brad hit the harmonies so hard, made the chorus vocals huge, and this was what really makes the song come out and punch you in the face.

We had Maxx Vick from As We Were come in and help us out with the round in the bridge, which just started off as an interesting idea. That built into an incredible part which I can’t imagine any other way.

“25” was incredibly last-minute. It was written just as we were going into the studio, and nobody but Brad (who wrote it in the back of his car on lunch breaks from work) know how to play it yet.

The lyrics are about feeling like you are stuck. You find yourself putting a lot of work into something, and there’s always the chance that it’s a complete waste of your time and energy. It’s about being afraid that you might not end up as happy as you had always been told you would. Afraid that you’ll always be stuck in the 25miles per hour town [that] you grew up in.

In retrospect, it might be better to assume that you aren’t all that important instead of being too pretentious to change that.

We weren’t able to appreciate this song for what it was until it was finished, and the theme stuck with us enough that we ended up making it the first single for the album.

Getting Worse is a second chance at life for this song. We recorded it once before and came to terms with not liking how it was done. Originally, we put “Asphyxia” on this album as a filler, but as we worked to get it right, it became a huge accomplishment and turned into something we really love.

We also had the opportunity to have a really insane guitar solo, which is typically something that Brad doesn’t do. We pushed him, he pushed back, and it totally kicks.

“Named After A Kiss Song”

This song was a Valentine’s Day present writter for someone who was very anxious and believed I was going to leave because of their anxieties. It was to reassure them that I wasn’t going anywhere. Originally, “Named After A Kiss Song” was entirely acoustic, but in the studio we decided to try something different and give it a little more ‘oomph.’

“I Hate You” was written in direct response to “Named After A Kiss Song,” actually. Meant to express my bitter feelings toward the person in question after a very messy… “thing.” We were able to really express our angry side in this song and dabble in very mental influences. In the middle of the song, we have a little homage to Motley Crue… we weren’t originally sure what to put there, and it fit well with the bitter feelings of the song.

Mark didn’t actually know how to play bell kit, but we knew it would fit in well with Brad’s harmonics at the end of hte song. It took us anywhere from 10 to 84 takes to get it just right.

“Stick That In Your Juicebox and Sip It”

This song is pretty much how I view living life. It’s about dealing with the negative things and feeling like you’re never going to move beyond them… More specifically, how you can view the little positive things and use them to get through whatever demons you’re facing.

“Keeping It At Arm’s Length”

“Keeping It At Arms Length” is about relating with someone who’s been through a lot. It’s about trying to show them that they’re a lot further along emotionally than they think, and they are stronger than what they’ve had to face.

The second driving factor behind this song is about trying to help myself through tough times. Sometimes you may have similar problems and the same insecurities as someone you’re trying to help, but that may not be apparent to them. As you’re showing them how to move forward, you’re struggling with accepting your own reality.

“This Particular Falling Out”

This song was about dealing with someone in my life who I thought was good for me, when in reality they were hurting me more than I knew. It’s a commentary on everything that would happen in that sort-of abusive relationship. It’s about continuing to go back to that person because you feel safety and comfort in something you already know. I guess a look at the struggle of finally being able to get rid of that.

There are a lot of early 2000’s riffs and harmonies in this song. We were trying to make something really big and powerful to back up the message of the song, and we definitely nailed that here.

There’s a lot that I could say about “Ex-Files,” and one of them would be that it is my proudest musical accomplishment to date. I wrote it in October of 2014 when I was working a dead-end job and coming home every night to binge-watch X-Files on Netflix. Emotionally, I was at an incredible low point. Many nights I fell asleep on the couch, and when I finally hit a breaking point I wrote this song.
It’s not a breakup song, it’s not a song about falling in love, it’s simply a snapshot of when I decided things couldn’t get any worse.

We all agreed that this was perfect song to end our album on. It will always get better if you work for it and let it.

Purchase a copy of Getting Worse here!

Better Things is an Alt-Punk/Emo quartet based out of Burlington, Vermont. The band is building a following with their hook-driven, hard-rockin’ pop-punk sound. Having made an impact with a debut EP, the band is set to release upcoming full-length Getting Worse. The new album’s second single “Stick That in Your Juicebox and Sip It” is available now.

Each member comes from a background of distinctively different tastes. One member cites Limp Bizkit among their inspirations, while another Less Than Jake. It’s that diversity that sets Better Things apart, and makes them the band they are today.