(September 19th, 2016) – Alternative Pop Duo Heirsound released a new music video for their single “Fell Again,” which takes us on a stroll through a green forest to a song about falling in and out of love again. The duo formed by Alexa San Román & Dane Petersen (formerly of Love, Robot) recently released their colorful debut EP, titled Merge, on 8/5/16. The EP consists of 6 songs, each song represented by a color that has an aura and a feeling, creating the color wheel. In addition to being a musical project, Heirsound strives to create visually stunning content for their fans and have created a slew of videos produced by San Román herself, each with the corresponding color as the theme.

“For the ‘Fell Again’ video we wanted to make a simple visual that still had an emotional feel to it. I felt like since the EP color for this song is green that incorporating slow-motion shots of trees and nature would make the viewer feel like they were on a walk with me. Because this song is very sentimental and nostalgic I wanted the visual to be something you could get lost in. As simple as this video is, there is still a lot of symbolism in the evolution of the shots – namely the locket & graveyard frames towards the end. Dane & I feel like it’s a beautiful visual for a poignant song.” – Alexa San Roman 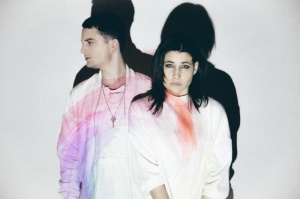 Heirsound was formed in New York in December ’14 around the talents of singer/songwriters Alexa San Román & Dane Petersen while the members were still in transition from a previous musical endeavor. Built around the dueling vocals & guitars of Petersen & San Román, the two set out to create an ethereal sound that they can call their own. Merging together from opposite sides of the country (Petersen from CA, San Román from NY), the duo start their journey as Heirsound with a colorful six-song debut EP titled Merge. First appearing on the public radar in October ’15 with the single “Do It Over“, the team’s new sound, & grassroots fan base became clear following a few months of visual artwork posts/teasers. Heirsound is a duo who let you into their own world sonically as well as visually. Always working together closely, Dane & Alexa released their debut EP on 8/5/2016 while continuing to showcase their live performance in as many places around the world as possible. Merge EP was recorded at VUDU Studio, produced and mixed by Mike Watts, engineered by Frank Mitaritonna, Tom Happel & Mike Watts, and mastered by Joe LaPorta.