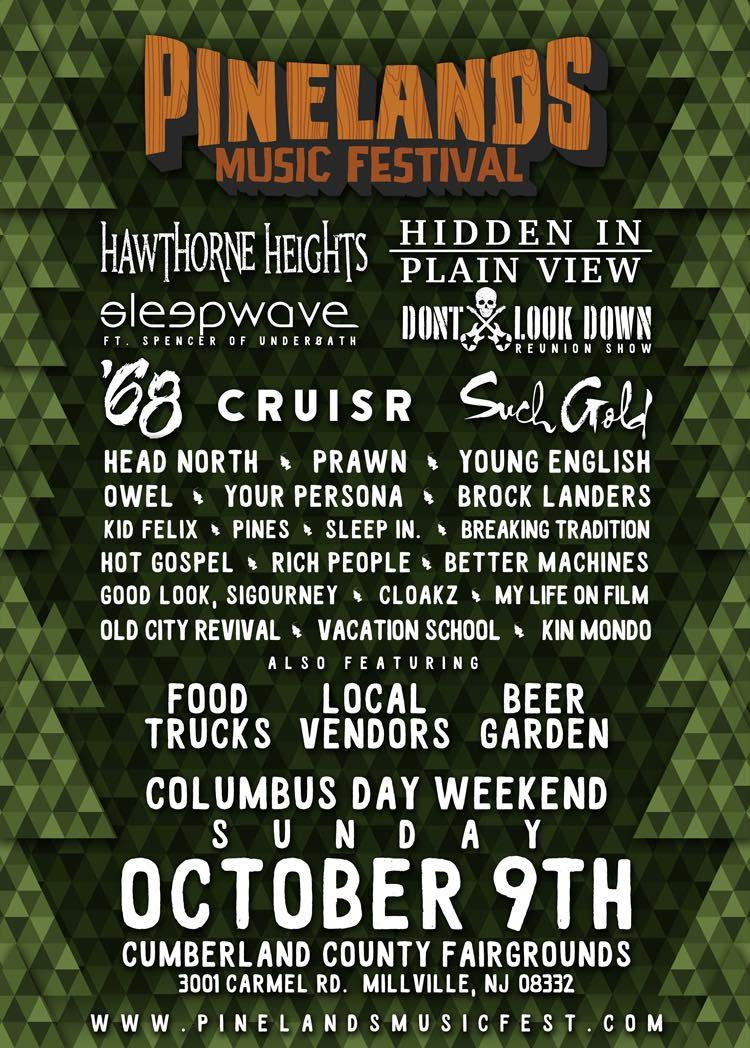 Pinelands Music Festival will showcase 25 bands and take place across two stages. The main stage titled “Pinelands Stage” will feature heavy-hitters such as Hawthorne Heights, Hidden in Plain View, and a reunion by Don’t Look Down. This is the band’s first show since breaking up 11 years ago. Vinelands own pop-punk quartet is thrilled to reunite at this year’s festival and recently unveiled a brand new song to celebrate entitled “No Way Out.” The local stage titled ‘Grandaire Stage,’ sponsored by a local booking/promotional company, Grandaire Booking, will feature 15 of the most up and coming bands from South NJ including Your Persona, Brock Landers, and more. The confirmed 2016 lineup includes: Hawthorne Heights, Hidden In Plain View, Don’t Look Down, ’68, Sleepwave, Such Gold, CRUISR, Prawn, Head North, Young English, Owel, Your Persona, Brock Landers, Pines, Sleep In., Breaking Tradition, Hot Gospel, Rich People, Better Machines, Good Look, Sigourney, Kid Felix, Cloakz, My Life on Film, Old City Revival,Vacation School, Kin Mondo. Festival Organizer, Nick DeLouise, had this to say about the lineup:

“One of the most exciting parts of Pinelands is the blend between nostalgia and present. The festival will feature some of our favorite early 2000’s heavy hitters, mixed with the region’s most up and coming artists. Reunions are a big part of this fest and to be able to host Don’t Look Downs’ first performance since their breakup 11 years ago. Growing up in NJ as a teenager and watching our hometown heroes Don’t Look Down grow from playing VFW halls to later go on and tour the world alongside some of the biggest names in music was an amazing thing to witness. Beyond that we truly have an astounding lineup of the area’s most promising musicians.”

Amidst a beautiful forested region, Pinelands Music Festival differs from other festivals of its size mainly in aesthetics. Tucked into the remote Pine Barrens of New Jersey, the forest breaks open to reveal an outstanding venue with plenty of amenities making it the perfect venue for a music festival. It offers the “destination festival” feel while remaining in close proximity to some of the biggest cities in the US. In addition, majority of the 2016 lineup calls NJ and the surrounding areas home, offering up nostalgia and hometown pride to the community.Pinelands is conveniently located 45 minutes from both Philadelphia and Atlantic City, and just under 3 hours from NYC, Washington D.C., and Baltimore. Tickets for Pinelands are on sale now at PinelandsMusicFestival.com.

This year, Festival Organizer, Nick DeLouise added a few new elements to spice things up, literally. Combining a love for all things local, DeLouise welcomes nearly a dozen local food trucks, restaurants, and refreshments to provide one of a kind menu’s and treats for all attending, including:

This year’s festival will include a record store where fans are encouraged to listen to some of the local acts and buy their music to promote the local scene. In addition, a dozen local artists will showcase their work along with several that will live paint during the festival. And to round out the day attendees are encouraged to browse Pinelands vendors including:
Kill Brand
Thrillcall
Tilly’s
Mermaid Metal
Fizzics
Gypsea Wandering
Kyani
Busy Bees

$38 for General Admission and 4 Ticket Bundles for $30 each