The band recently completed an extensive run across the US on the annual Vans Warped Tour as well as an explosive performance at Ozzfest Meets Knotfest this past weekend. The band is currently touring in support of their recently-issued sixth full-length, Mark Of The Blade. Hailed as an, “exciting milestone,” by Alternative Press, Mark Of The Blade was produced by Mark Lewis (The Black Dahlia Murder, Cannibal Corpse) and sees WHITECHAPEL redefine who they are and what they are capable of with the resulting eleven tracks. 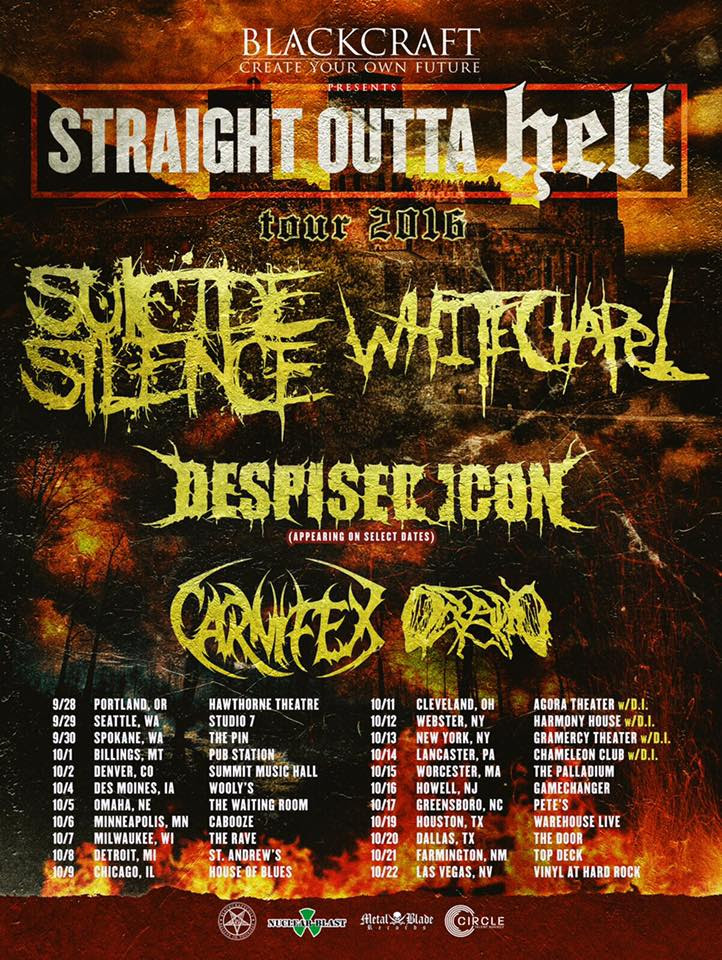 “The theme of ‘Mark of the Blade’ is a celebration of Whitechapel being together for ten years and the fans that support us no matter what,” states vocalist Phil Bozeman, and after just one exposure to the record’s 11 riveting tracks, a more fitting tribute is unimaginable. Pushing their sound forward with each successive release, the sextet have never allowed anyone outside of their ranks to dictate or influence the music they write. Mark of the Blade sees them remain true to their roots while making their most dramatic progression to date, the emphasis falling more on groove than blastbeat-driven death metal violence, as well as venturing into previously unexplored territory, both sonically and lyrically. “It’s the most dynamic record we’ve done, in the sense that one song can be very aggressive while the next one will be softer and sentimental,” guitarist Alex Wade asserts. “I think it’s great that we have opened up our sound to just write and play whatever we think sounds good. If it’s soft and has clean singing who cares as long as it’s a good song? I would rather do that than be closed-minded and stick to only the ‘extreme’ side of metal.”

With five genre-redefining albums to their name, the Knoxville, Tennessee natives have carved themselves a unique niche in contemporary metal, and in doing so have spoken to legions of fans. Making their presence known with 2007’s The Somatic Defilement, their profile has steadily grown, and 2014’s Our Endless War saw them crack the top 10 on the Billboard Top 200 for the first time. Their reputation for maintaining their integrity is well-earned, and going into their sixth full-length this commitment is stronger than ever. “I honestly don’t think that we ever have to prove anything to anyone, we do this because we enjoy it, and if people want to listen and support us, that’s just a bonus,” says Bozeman. “With this record we knew what we didn’t want to do. We wanted to get away from the faster stuff, because we’re burned out on that 260bpm blastbeat thing. We’ve done that. Ultimately none of us agree with genre pigeon-holing, and we’re not afraid to write what we want to write, no matter what anyone else thinks.” While the band had clear ideas for elements they wanted to explore, they did not allow this to dictate the record, which developed more naturally, focusing on what was best for the individual songs, refusing to accept anything less than the absolute best they could possibly do. “Nothing was set in concrete when we started writing, and we did not force anything,” Wade states. “For example, the idea of including some clean singing was brought up before any songs were written, but it was never really like ‘okay, we’re doing this’ until the songs that we planned to have that on were complete and Phil could say ‘so I’m clean singing on these, right?’. At that moment it felt exciting that we were exploring musical territory that we hadn’t before, and that we were confident in doing so.” In realizing the album, the band – rounded out by guitarists Ben Savage and Zach Householder, bassist Gabe Crisp and drummer Ben Harclerode – reunited with producer Mark Lewis (The Black Dahlia Murder, Cannibal Corpse). “When it comes to recording we have the ‘if it’s not broke, don’t fix it’ mentality, and he really does find ways to make us sound better with each record. From ‘Whitechapel’ (2012) to ‘Our Endless War’, there really was a large step forward in terms of the production and tones, and I feel that is also the case with the progression from ‘Our Endless War’ to ‘Mark of the Blade’. This is the biggest we have ever sounded on a record, and it’s great to see his growth as a producer matched with our growth as musicians.”

With Mark of the Blade under their collective belt, the band is truly stepping into a new and exciting phase of their career. Having redefined who they are and what they are capable of, their place in the modern metal landscape has only solidified – and while they remain typically confident they are equally humble. “This record plainly states ‘this is who we are’,” Wade asserts. “We know we have fans that depend on us just as we depend on them, and this record displays that deep connection. In the end, that’s what it’s all about.”