There’s a reason why we Detroiters proudly boast that #DetroitHustlesHarder. And, believe me, we don’t throw that slogan around lightly. We’re marred by a city that’s plagued by a vast amount of social, economic, and political issues. Rampant corruption, exploitation, romanticizes urban decay, high crime rates abound our hometown (not to mention, a metro area that LOVES to associate with us by word-of-mouth, but can’t seem to follow through on any monetary contributions to our local economy). It’s no small wonder as to how and why we take on a “Detroit vs. Everybody mentality,” especially when we’re set in a such a failed system. However, that does not mean that we’ve become calloused and cold to the world. Rather, it means that we work harder; we strive and struggle in a unique way. You see, a Detroiter goes about the world with sharper wit, larger enthusiasm, and thicker skin than most just to survive and maintain. But we don’t stop at the bare minimum, no sir. We’re also ridiculously innovative and experimental. We continue to push ourselves to grow and expand far beyond our perceived limitations, reaching farther and farther into unexplored opportunities and industries. At times, we faulter, but we never accept failure. We pull ourselves up from our bootstraps, buck up, and continue on. Our particular brand of perserverance isn’t something that can be taught- it’s an innate sense. You’ve either got it, or you don’t (and you bet we’ve got it). It should come to you as no suprise, then, as to why Detroit’s very own The Banshee Pilot has come into view on my radar.

I’ll admit, I’ve been following The Banshee Pilot since long before their inception in 2015. Formed by members in previous local hardcore, metal, and post-hardcore groups, the Banshee Pilot finally came together in 2015 as a conceptual alternative rock band. I’ve spent a lot of time watching these guys evolve and shift over time, experimenting first with a gorgeous cover of “Shameless” by The Weeknd and furthering into a mixture of hard rock, 2000s emo/alternative, and elements of post-hardcore that became their debut self-titled EP. And, I’ll admit, through each lineup change and restylization of their sound, I grew more and more hooked. Every iteration showcased a new source of innovation and The Banshee Pilot began to really soar to a new level of intrigue and musicality.

The thing is (in true Detroiter fashion), The Banshee Pilot didn’t stop there.

They recently released a new single (and respective music video) titled “Modern Romance,” and they’ve really hit the nail on the head with this one. Smartly crafted riffs and licks are met with driving percussion and the seductively edgy-yet-smooth vocals that create an infectuously tantalizing track. It both pays homage to early-2000s alternative giants, such as My Chemical Romance, 30 Seconds To Mars, Green Day, and The Killers, yet carves out its own little niche. “Modern Romance” does more than just seduce you with its finely-tuned instrumentation and craftsmanship- it winds its way through your inner ear and deep within your bones, leaving you instantly hooked and begging for more.

It’s this kind of perserverance, innovation, and craftsmanship that makes me proud to announce and feature this Detroit-based Alternative Rock outfit as our “Rookie of the Week.” It takes guts to strip everything that you once knew and rework it time and time again, to constantly experiment and evolve through trials and tribulations in the search for some semblance of perfection. And, by God, did The Banshee Pilot earn it.

About The Banshee Pilot 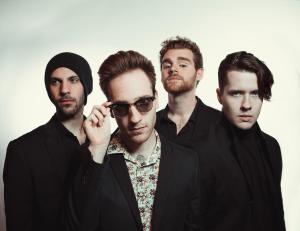 The Banshee Pilot is an Alternative Rock band hailing from Detroit, MI.

Connect with The Banshee Pilot