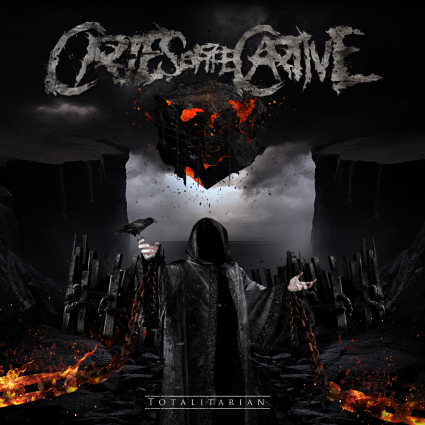 Through my time listening to deathcore, I’ve found that bands are either a hit or miss when it comes to having a unique, memorable sound. Yeah, I said it—deathcore lacks variety. But who can really blame these bands when deathcore fans like you and I just want to hear the same thing over and over—those classic breakneck drumming speeds, djent, and growling…?

Maybe that’s why I found myself actually digging Cries of the Captive’s Totalitarian; each song of the album leans on the crutch of the norm while still slightly straying from it. The crutch? Growls riding over heavy, technical bass drumming. The strays? Those dramatic pauses when you can’t tell what’s coming next. The toned-down, echoing guitar in its ominous code-like pattern. Anticipation builds. Expectations rise. When abrasive gutturals finally make their entrance, you’re battered against your will by an onslaught of mad bass, eerie echoes of guitar, a barrage of sound… the album screams “sacrifice” and “lava” and shit like that. There’s even a pervasive feeling of ancient rituals going along with each song you hear. Each sound of the album projects a chilling ominousness and suspense that is hard to get out of most deathcore (since it’s so consistently and continuously ‘punch-you-in-the-face-with-sound’ throughout). Here, you’re not assaulted head-on but gradually introduced and then finally bashed in the ear. Bashed in the ear with greatness. Yes.

I’m about to get very specific here with what the album sounds like. I’d liken this album to a variable mix of Suicide Silence and Disentomb, as it’s right on the edge of piercing your soul with screams while also focusing on some intense guttural growling. Each song seems to tell a story of its own, and the careful titles may have a lot to do with this. I let my own imagination and the tell-tale sounds take me wherever they pleased. Take my favorite song on this album, “Grief,” for example: With the dramatic, sacrificial guitar welcoming some classic djent, you find yourself entering the most badass battle of your life through dungeon doors and into a barren “dirtland.” A red light is coming in from somewhere, and suddenly you get closer and closer to the beast you’re supposed to face. (Classic.) The two of you stop to leer at each other—him huge and bulking, you menacing and armor-clad. (Classic again.) With the scene set, the song proceeds to detail the battle through sound. You and the beast take turns striking, neither exactly winning at the moment. Then, with a heavy splashing of cymbals, you slowly get the upper hand over the beast and push its sorry ass to the edge of a cliff right above molten lava. (The more intense version of The Lion King.) But at this precise moment, the beast tricks you, rushes you, pushes you off slightly. And you’re hanging on the edge for an uncomfortable while. (Too classic to bear.) The beast threatens to push you in as time melts away. This hanging there proceeds with drama—and admit it: you’re fucking scared. But nonetheless, you get up and you’re there again, right next to him, both of you squaring up again to the beat of the music.

Yet the scene cuts off immediately with a sudden cutting of sound. The battle isn’t over, even though the song is.