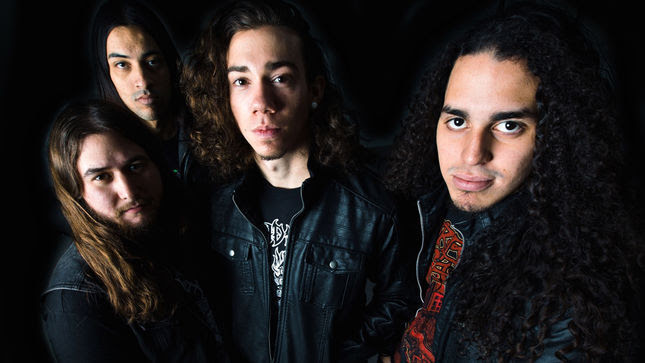 “With this single we wanted to show our followers the path we are taking before starting on our second album. We would say we went heavier this time, and the new ideas we are writing are taking pretty much the same direction; heavier, deeper and more powerful.” – Berny Santos (Vocalist/guitarist).

Watch the lyric video for “End Of The Road” below which is also available at Bandcamp, iTunes, Amazon, and Spotify.

Calamity started in 2010 as a cover band named Silent Screams. In 2011 the Puerto Rican band had their debut show on the local scene, but already as a Thrash band under the name Hush. After the cofounder and at that time singer Gabriel Quiñones left the band in 2013 the group has taken into a heavier and deeper kind of Thrash Metal. Now as Calamity the founders Berny Santos in Vocals and Guitar, Gonzalo Ortiz with the Guitar, Fernan Rivera the Bass man and Eduardo Acevedo in the Drums, have released their first EP Let em’ Burn in September 2014 and their first Full Album Imminent Disaste on December 18, 2015. Imminent Disaster was supported by the band’s first US tour alongside their local partners, Zafakon during winter 2015/2016. Calamity released their single End of the Road on October 17, 2016.