Most of us United States citizens are still reeling from our most recent Presidential election, in which an alarming percentage of White Americans decided to elect an orange cheeto that ran on a platform of bigotry and hatred as their head of country. Some are still grasping at straws for a coping mechanism, oscillating between fearing for their personal safety (and their loved ones’ safety) and downright depression. Some are looking forward to recent legalizations of marijuana in certain states. Some are on their 15th bottle of Absolut (Hey, Absolut, sponsor us!) as their newsfeeds fill with an innumerable amount of posts that sling hatred, dangerous slander, outrage, white complacency, and finger-pointing from across the safety of an internet platform. Some are looking forward to the President-Elect’s proposed further nullification of our bare-bones gun safety regulations, so that they can arm themselves much faster and easier than ever before as Myron Ebell marches us straight into the warm, loving embrace of Impending Environmental Devastation and its wingman, Crippling Economic Decline As A Result of Mass Food Shortage.

No matter what our individual circumstances are as we are preparing to see our country set the clock back to 1950, we all have seemingly turned our heads to the north: Canada. Also known as the “Only-Place-Where-You-Can-Find-Hottie-Justin-Trudeau-Emerge-From-A-Cave-As-The-Shirtless-Prime-Minister” & “Basically-The-Next-Best-Place-To-Find-Maple-Syrup-Besides-Vermont.”

If- at now a week after the election- you are still finding yourself compulsively checking CAD exchange rates and heavily contemplating *legally* jumping the border into the land of free-healthcare to match those high-rates of death-by-moose, then you had better start getting acquainted with Canada’s rich, regionally-diverse culture. We’re helping you get a head start at becoming a more in-tune Canadian citizen with a convenient list of 10 Canadian bands and musicians that you should definitely get to know.

Chad Vangaalen is a quirky hermit that writes quirky music. Known for rarely leaving his rickety house in Calgary and endlessly producing art and illustrations, Vangaalen also spends much of his hermitude writing and recording. Sonically cohesive, lyrically eccentric, instrumentally zany, Chad Vangaalen is a segment of Canadian music haute couture that you absolutely need to know, lest you look nothing short of ridiculous at dinner and cocktail parties.

Yes, there are other Canadian rappers besides Drake. And there are some that have been around much, much longer. And there are some that have much more specific penchants for artistic expression and flair. Cadence Weapon is one of them. The Edmonton, Alberta native has been around since 1995, but found himself more and more in the spotlight in 2005 with his critically acclaimed album Breaking Kayfabe, which would then spur two more releases, collaborating with big name artists such as Grimes, and also earning himself the title as Edmonton’s Poet Laureate.

If you’ve been searching for a Canadian band that is dynamic, sexy, and intelligent (like PM Justin Trudeau), then look no further- Big Wreck is the band you’ve been waiting for. With 90’s instrumentals and vocals that sound identical to Chris Cornell, this is a band you don’t want to miss out on! Their album Albatross has something for everybody and their talent is second to none, not to mention their songwriting abilities (including allusions to Samuel Taylor Coleridge’s Rime of the Ancient Mariner).

Bonus pro tip: Seduce your new Canadian love interests with the track, “You Caught My Eye.” …No need to thank me, you’re welcome.

Alvvays are a Toronto indie pop rock quintet. Their frontwoman, Molly Rankin, comes from a famous line of Celtic Folk musicians. She, however, prefers to play a blend of dream pop and beach rock. Their music packs plenty of charm, and fits snuggly in any mix tape or playlist with Mac Demarco, Best Coast, and The Beach Boys. Their self-titled debut reached number one on college rock charts and the band are currently at work on album #2.

Ohhhh, you bet that Canada can bring the mother****ing SLAMS! Words can barely begin to describe Falsifier’s quick-rising career of aural devastation. Malevolent? An understatement. Ferocious? That’s just the tip of the iceberg. It’s more like pure, unbridled savagery served to your ears on a mountain of human skeletal remains. Vicious, visceral, and vehement, Southern Ontario’s Deathcore giants will split your skull wide open and slowly tear you apart limb by ****ing limb. Plus, with rave ratings and reviews such as this: 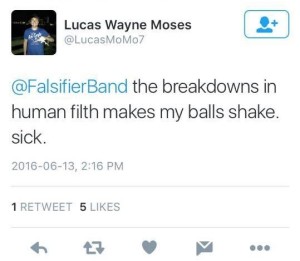 …How can you resist?

If you’re in the mood to lose a few teeth, snaps some bones, and experience extreme bloodloss, then Falsifier’s got just what you need.

From the frozen, rocky landscapes of Newfoundland, Canada comes some of the chillest feel-good indie vibes: Hey Rosetta! The band got their start back in ’05 when frontman Tim Baker came home from a trip with a suitcase full of poetics. After the addition of string section (cellist Romesh Thavanathan and violinist Kinley Dowling) and rhythm section (bassist Josh Ward, drummer Phil Maloney, and guitarist Adam Hogan), Hey Rosetta! began to take the world by storm, continually infecting listeners new and old with an amalgamation of jangly orchestral goodness.

Oh, for the love of- look, just trust me on this one, okay?

2:24 – 4:25 is a whole goddamn solo and if you can’t appreciate it, then you truly have no taste and Canada will turn you away at the border.

Speaking of sh*t that rips, allow me to introduce your uncultured butt to Toronto’s Intervals- the instrumental, jazz-influenced progressive math rock brain-child of virtuoso Aaron Marshall. What’s most impressive is Marshall’s pristine attention to detail, which boasts itself proudly in every smooth, clean, layered track’s textures of chunky grooves and blasting melodies that soar far-past our own galaxy. For an auditory intergalactic space trip that also features special guest performances and writings from Australia’s Plini (please know who this is and NOT disappoint me worse than you already have your father), drop everything you’re doing, call your wife to tell her goodbye, and press play.

Bedouin Soundclash is a band that fuses together elements of reggae, alternative rock, dub, and soul music to create a uniquely and wondrously infectious art form. Need I really say more? You need me to? …Really? Alrighty, welp, Bedouin Soundclash got their start way back in university at Queens in Kingston, Ontario. The current lineup consists of vocalist and guitarist Jay Malinowski, and bassist Eon Sinclair with Sekou Lumumba on drums (original drummer Patrick Pengelly departed back in 2009) and they. friggin’. slay. But don’t just take my word for it- let the 4 studio albums; the band’s breakthrough single “When the Night Feels My Song” on Canadian radio, charting #1 on 102.1 The Edge CFNY; their 2005 Vans Warped Tour appearance; their 2004 album’s Sounding a Mosaic status as #1 on the BBC 6 Music charts; their performance at the 2010 Winter Olympics in Vancouver, BC; and their history of charity events/benefit shows (for starters, the main performance at the September 17, 2006 Toronto rally calling for Canadian intervention in the Darfur crisis; cystic fibrosis fundraiser held in memory of the band’s friend and agent, Paul Gourlie) as testament for how mighty and far that they’ve come. Inventive, imaginative, and a whole lotta fun: Bedouin Soundclash is a must-have in your life.

Born Ruffians is an indie-rock/pop ball of sunshine from the tiny town of Midland, Ontario. The band got their start making music together in high school in 2004 under the name “Mornington Drive.” Years later and a slight lineup shift, they reformed as Born Ruffians and released their debut self-titled EP in 2006. Perhaps they didn’t realize that that release marked only the beginning of a life-long career venture, but after 4 critically-acclaimed releases later (2008’s Red, Yellow & Blue, 2010’s Say It, 2013’s Birthmarks, and 2014’s Ruff), we’d say it’s safe to say that they’re in it for the long-haul and we couldn’t be happier. If you’re looking to get dancey, Born Ruffians is your key to toe-tappin’ smiles.