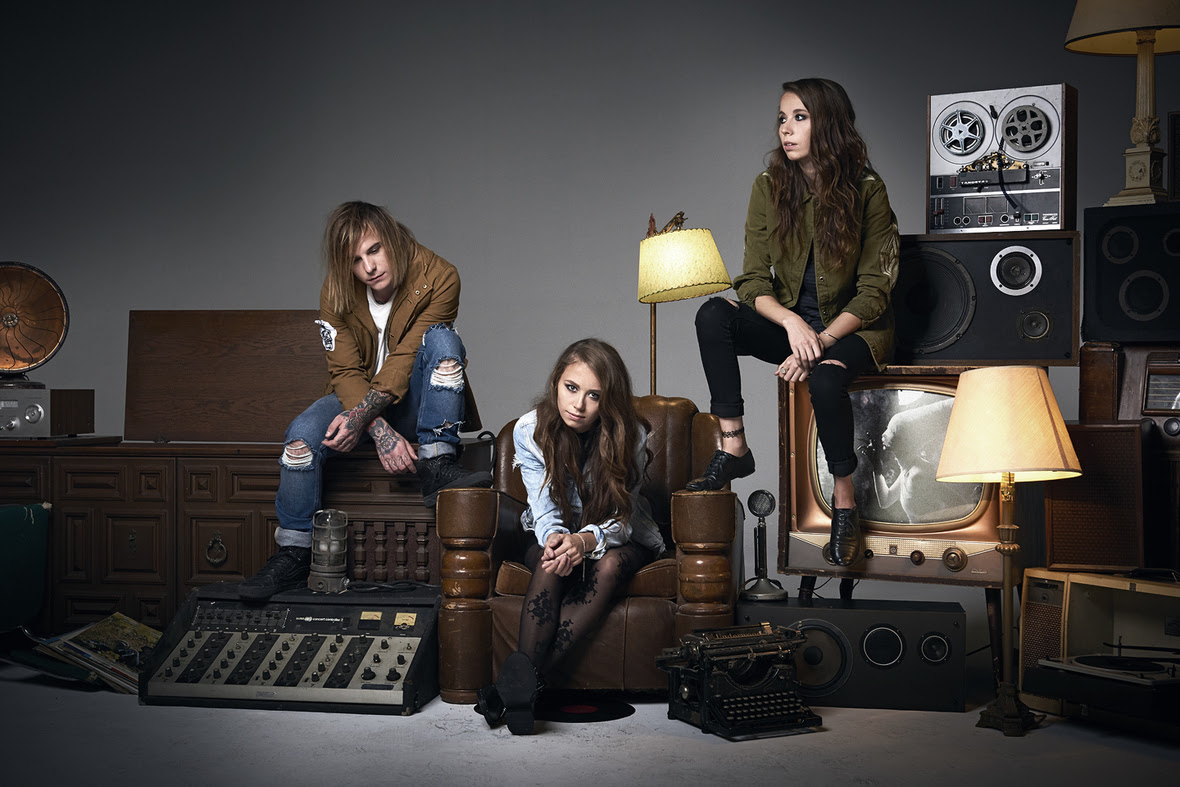 (December 3rd, 2016) – InVogue Records recording artists Courage My Love have today announced details surrounding the release of their major label full-length debut album Synesthesia. The 14-track album is set for release on Friday, February 3, 2017. The album is available for pre-order beginning today HERE. Fan’s pre-ordering Synesthesia will instantly receive downloads for the album’s first single, “Stereo” and the album track “Animal Heart.” Fans can also pre-order the physical CD or vinyl in a variety of bundles including shirts, hats, posters and more from the band’s webstore.

Recorded in Toronto at Noble Studios and Pocket Studios, Synesthesia introduces a new arsenal of sounds for the Kitchener, Ontario, based trio who have made a name for themselves and built a strong following on a number of tours across North America and Europe.

Defined as a blending of the senses where the stimulation of one sense leads to an automatic, involuntary reaction in another, like hearing in colour, Synesthesia was titled to reflect Courage My Love’s newfound stylistic maturity.

The album is ultimately about emotional empowerment.

“We wanted it to be a message where if someone is going through something, where they’re doubting themselves or are just in a bad situation, that they hear something in the album that makes them realize that they can make it out the other side,” says drummer / Phoenix Arn-Horn.

“We didn’t want to be stuck underneath a female-fronted rock band ceiling,” admits Arn-Horn’s twin sister guitarist / singer Mercedes. “We wanted to reach beyond that constraint and see where it would take us.”

“We lost our ego of wanting to show off,” says Phoenix. “Now, when we write, it’s more about the song and what it needs. We try to make songs instead of flashy parts.”

Stay tuned for details on Courage My Love’s tour plans for 2017.

About Courage My Love

Courage My Love were first discovered at a 2010 Battle of the Bands in Stratford, Ontario. The band’s independently produced video for the song “Bridges” amassed over 2.8 million views. Director Kevin Smith (Silent Bob) was among the many fans that had discovered their music. The band signed with Warner Music Canada in 2011 and in 2012 Alternative Press Magazine pegged them as one of the bands to watch that year. In 2014, the band’s first two EPs, For Now and Becoming, earned them a 2014 JUNO Awards nomination for Breakthrough Group of the Year and later that summer Courage My Love joined the Vans Warped Tour across North America.

Connect with Courage My Love