(June 30th, 2017) – Baltimore, MD’s experimental rockers Megosh have announced the official details of their 3rd ever Couch Tour. The Apostasy Couch Tour is the band’s follow-up to their December 2016 debut album release of Apostasy with Outerloop Records.

Previously, the band gave fans the opportunity to be a direct part of the tour and book a Megosh show at their house! While these are private shows for invite only, fans can head to YouTube to check out daily coverage from their adventures. Full dates and routing are listed below.

“We did it! We successfully booked our 3rd official Couch Tour. These tours are no easy task as we have to book around our fans’ plans, small town or living situations to make some of them possible. With 14 dates and only one off day, Megosh leaves July 1st to lightly touch the south and hit the north hard. We are even going up to Canada for a date! We can’t wait to personally meet each recipient and look forward to learning about them and making new friends.” – Josh Grosscup 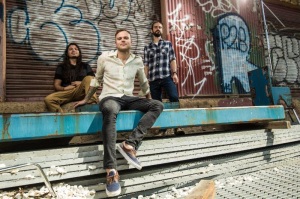 Baltimore’s Megosh have been toiling behind the scenes for some time brewing up a catalog of high-energy intelligent rock. Their music is melodic with post-progressive elements and frequent forays into the territory of alternative metal, but they manage to maintain an overriding pop sensibility.

Megosh fuses these eclectic ingredients into a surprisingly cohesive stew, a sound that is clearly their own. Impressively complex instrumental material will certainly appeal to the musician however, with Megosh, songcraft still reigns: creative use of rhythm and catchy melodies are certain to captivate a wide audience.

On top of all this, the front line serves up tasty three-part harmonies- something rarely heard in today’s rock scene.