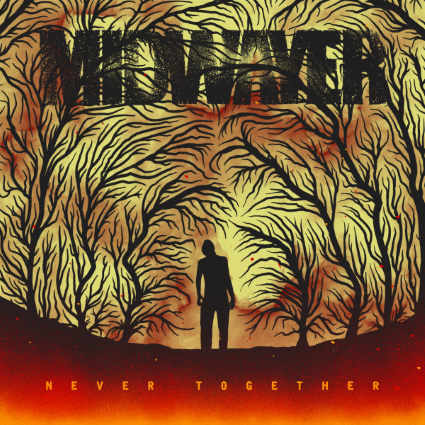 It’s Ruth here, coming back on the radar with another review!

On my own, I must say that I have been exploring grunge more lately, which is a change of pace for me, in addition to some hardcore. But, I am very excited today to review an original genre favorite of mine: metalcore!  I think metalcore was the genre that really got me into metal in the first place—the telling lyrics, the depth, everything—and Midwayer’s album Never Together takes a melodic spin on that genre.

On an instrumental standpoint, I can best imagine this album fitting as a cinematic soundtrack. In listening to Never Together, I found an intriguing and interesting compulsion to splice certain segments of any of the tracks and insert them into thrilling, action scenes of movies- perhaps movies similar in content and depth to the Lord Of the Rings series. (Anyone here good with movie and sound editing?)

Overall, I felt the album purport a sort of classic ‘sunset-showdown’ type of energy, complete with horsemen,  one-on-one combat, and dramatic rivalry, spun into an aggressive musicality. Most of the songs come standard with intros that ease into the melodies, and every time this happens, I cannot help but vividly imagine two armies approaching each other against rays of dying red light. Then, when the heaviness and fast riffs drop, we are presented with an immediate battle-spirit tirade of crushing brutality. As if in a moment of pure synesthesia, the songs sound like a red-burnt sky, as if I were staring into the depths and intensity of a Nevada sunset, with quick footwork and flares of melodic, chunky riffs highlighting the complementarily spastic array of brown, orange, and yellow that trace across its expanse.

Now that I have my exposition of sensation laid before you, I would like to impress upon you how I felt about the album- unbelievably confused.  In fact, I was not sure how I felt until I realized one specific thing, which I will reveal later in my review (and I hope the anticipation kills you).

My favorite song on this album is definitely “Reverse Interment” because it highlights the best qualities of Midwayer. For one, the intro is unsuspecting, foggy, and reminiscent of a scene: a man standing alone on a reddened planet. I love that the song gets hurled straight into a recurring guitar riff here, followed by vocals that remind me of August Burns Red.  Though, on that note, I will say that I am not a huge fan of the vocals, as they sound forced, compressed, and a bit painful (dry throat?). What’s more, the vocals appear more like a background than foreground— too distant and blurry.  However, the vocals do work well in creating an initial scene and setting, and it defines the focus of the song to be the instrumentals instead, which is an appreciated change. The instrumentals were, in fact, very fine-tuned (pun intended), which makes up for this vocal background; I especially enjoy the bass around the middle of “Reverse Interment”, as it sounds so refreshingly mellow and allows the showdown we’re witnessing to take a break.  Overall, the song does very well in setting a scene and colored atmosphere.

I think “Reverse Interment” also felt like the best song on this album because it had something the other songs did not: cohesiveness and predictability. That is, a greater cohesiveness in theme and a more comfortable level of predictability in terms of the song’s progression. In the rest of the album, the general lack of these qualities was, for me, one of the biggest qualms I had about this album. Which brings me to a few criticisms now.

Can you recall that one specific thing ruled my opinion of this album?  Well, drumroll please!  There was one fundamental thing missing from Never Together: feeling.  As in, I didn’t really know how to feel- let alone feel anything- while I listened.  I can picture the scenes, I can picture the action, but I don’t really feel any thrills. I feel not victorious, or defeated, or in danger, or lost. I do not even know whether to feel happy or sad, as the songs sometimes seemed to start into a major key but then shift to minor, back again, and more. The aural whirlwind of what can be best described as purely directionless-ness rendered this album utterly emotionally confusing, perhaps because I did not feel as if there was any trace of coherence in thematics for each song (except for the well-executed red-spattered ire) and a general lack of predictability when I wanted it- and needed it- most.

I found this lack of emotional clarity to be very unsettling, as metalcore is famously known to be one of the most emotionally-revealing metal genres, and I simply was not feeling that with Midwayer’s Never Together.  Who knows— maybe this emotional ambiguity is a change that will be embraced in metalcore in the future, but I was not particularly enthusiastic on this front for now.  I do think that a great part of the issue for this album was a failure to stir up emotional depth in general— at least, for me— which is another issue entirely.

Overall, Midwayer is clearly a talented set of musicians, though I believe a focus on emotion and direction would greatly help the band in future albums. Their technical prowess was, unfortunately, rendered stale in its final presentation, especially with the unwarrantedly sopoforic mixing of the instrumentation and vocals. Better luck next time, Midwayer; for now, I’ll just continue exploring some more grunge and hardcore. (Ruth Xing)

For Fans Of: A flatter version of Unearth, a shallower Misery Signals, and a poorly-mixed Darkest Hour