Today, we are proud and pleased to present to your ears the exclusive premiere of Los Angeles-based pop rockers Romance & Rebellion’s brand new single “For A Moment.”

The pop-rock quintet come out swinging for the fences with the first single off their upcoming EP For A Moment. In  particular, the fresh title track showcases the band’s adaptivity, as we listen to the starry-eyed lover boys we met last year are add a little more “rebellion” to their namesake sound. Soaring vocals and searing guitars sit atop thunderous drums in a dramatic soundscape, while poetic lyrical content questions the true fundamentals of mortality and youth.

The upcoming EP has been no easy feat for Romance & Rebellion, but it does indicate a better change in direction. So far, the band has worked with 3 new producers for 3 different tracks (Warren Huart, Stefan Litrownik, Lennon Leppert) and they’ve recorded all over their hometown (Studio City Sound, Spitfire Studios, Smashhaus Studio in Burbank). What’s more, this EP marks a first for the band- all members are playing on the record, which means that the studio sound reflects the individual and collective musicality of the band.

Catchy, bouncy, and with a trace of grit, Romance & Rebellion’s new single is indicative of a refined harmonic musicality. A definitive benchmark song for the band, “For A Moment” raises the bar, and proves that the band is just as much ‘Rebellion’ as they are ‘Romance.’ 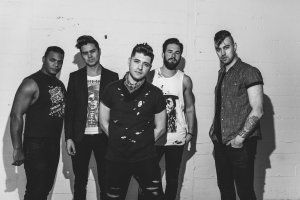 R&R has wasted no time proving it has the makings of greatness. After the release of their self titled debut EP; two singles with respective music videos; dozens of articles; thousands of fans; and countless high energy live performances (including two showcases at the 2017 SXSW music conference), the group is gearing up to kick off the Summer with the release of their new single “For A Moment”, produced by Warren Huart (Hey Violet, 5SOS, Aerosmith, The Fray) and Stefan Litrownik (One Direction, Andy Grammer).

Sources say the group has tentative plans for a supporting tour in fall of 2017. With another EP on the horizon the ‘buzz worthy’ status surrounding R&R is growing and has fans cheering “LONG LIVE THE REBELLION-” and there’s no sign of stopping!