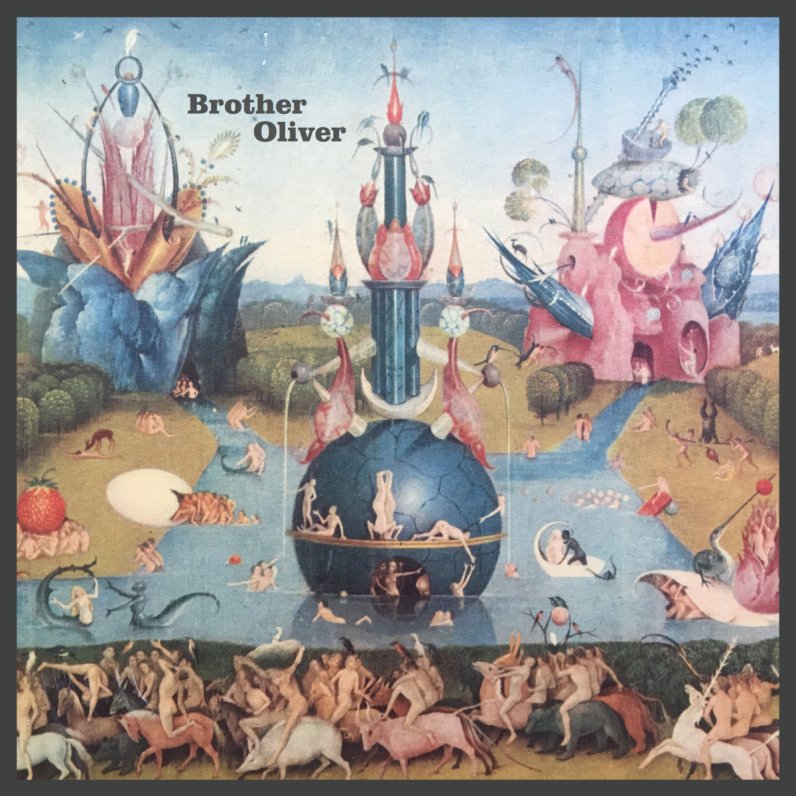 Precise; poignant; passionate. These are the three words that can best summize the brilliant trifecta that comprises South Carolinian sibling duo Brother Oliver’s latest self-titled psychedelia-infused-folk-rock effort. The band started a mere 6 years ago, with Michigan-born brothers Andrew and Stephen Oliver trekking over hundreds of miles, working tirelessly over soulful licks and melancholic riffs, tinkering with a sound that would slowly grow to become a collosal fusion effort, culminating in the form of two albums, Stubborn Fool (2013) and Kudzu (2015) respectively. Two long years of relative silence would shortly follow Kudzu, with the band logging in countless hours, sweat, and blood to re-orient and rediscover their directionality, taking inspiration from anything- from old tape-deck recordings of youthful caprice to works of art from the 1500s. The result of such painstaking perfection is their third LP, justly entitled Brother Oliver. Drenched in soulful wandering and wondering, psych-rock punctuality, and folksy melody, Brother Oliver finds itself at the apex of flawlessness in terms of the duo’s progression in their career. Equal parts dark, bright, and rife with eloquent emotional tonality, Brother Oliver is a pastoral panoptical soundscape of what it means to redefine ‘progress’ and re-root a sense of purpose in its purest art form.

Today, we have the pleasure of presenting and divulging in Brother Oliver’s self-titled LP, with all words and insight provided penned by frontman Andrew Oliver. Each track- as well as the ocassional special extra- is embedded for the betterment of your audio and visual experience. We hope you enjoy this as much as we do!

“I Rely On Everything”

The album starts with an old cassette recording of Stephan and I apparently talking about the smell of cigarettes as children, a conversation soon reprimanded by our mother, who can be heard calling from another room. It’s ironically fitting because the opening track that follows, “I Rely On Everything” is about addiction. WHile the song is most explicitly about over-reliance on things- electronics, phones, drugs, etc.- there’s also subtle lyrical hints of dealing with more serious mental instabilities that come along with the overly-flashy, high-speed era in which we live.

The production for “I Rely On Everything” is unique amongst the rest of the album. Half of the song was tracked into a handheld cassette recorder- the same cassette recorder that we pulled the opening sample from.

“Where’s My Tie” has been the top-streaming song off the new record thus far. It’s also the most cryptic. Adderall-induced insomnia is the purest inspiration behind the 1st verse:

But it moves on from there. The 2nd verse begins to explain the track’s title as well as the over-arching dilemma- waking up to face what feels like overly-systematic ideals and expectations of the working-class American:

“Where is my tie? They say there’s cameras everywhere,
What do I say? I don’t know, you haven’t told me,
Where do I hide? Come on, there are no trees anywhere,
How do I survive when everyone’s living off me?”

The closing lyrics featured in the song’s finale are meant to be blunt:

Humorously enough, those closing lyrics, while fitting for the song, were inspired by a scene from the 1963 comedy feature-film It’s A Mad, Mad, Mad World.

Simply put, “Maybe” is a song about finding and accepting real peace and contentment. It carries the torch of our Christian hope through what else would be an ideologically dark record. The song is also somewhat of a throwback to the feel of our first record, Stubborn Fool, which is alluded to in the second stanza:

“Maybe there’s something else besides me,
Maybe something else is there,
Maybe the stubborn fool is dying,
Maybe I have been prepared,
The path has been laid, and the light is lit,
All that’s left to do is walk in it.”

Atmospheric noise can be heard at the beginning and end of the song (birds chirping and trees blowing in the wind, etc.) Those sounds were recorded on the back deck of our apartment studio in Mauldin, SC, which is also the same spot the song was written.

“What Will Be Will Be”

“What Will Be Will Be” is one of those tracks that’s always kept coming back around. Originally, it was on a slower-paced acoustic track on our 2013 record Stubborn Fool. Somehow, between then and now, the song kept evolving and evolving, becoming more and more rhytmic until it finally settled into the upbeat song it is today. This new self-titled record was, in a way, meant to be a re-introduction of who we are and we felt compelled to include this new arrangement to give it new life.

The long transition from “What Will Be Will Be” into “Darling” is one of our favorite parts of the record. We wanted to show off some of what we were doing live at the time, which was importantto us with this project. I really wanted to take the listener out of the studio, give them a break from song structure, and transport them into a giant concert hall where they’re seated dead-center, the only ones in attendance. After the extended transition/intro, “Darling” kicks in with what’s been best described as a “rock thunderstorm” (Kalyn Oyer, Post and Courier). The trumpet mix on the chorus was meant to be reminiscent of a Maynard Ferguson-style fanfare and it’s nearly spot on, albeit a couple of octaves lower.

“The Garden of Earthly Delights”

If you’ve listened to Brother Oliver records in the past, you’ll know that there’s typically an instrumental or two on every album that more or less resembles an animal symphony. This track is one of those tracks- a studio track that was grown organically one part at a time. “The Garden of Earthly Delights” is also the name of the painting we used for the album artwork- an original piece by Hieronymus Bosch dating back to the 1500s. I hear the painting in the song, so naming it as awe did seemed appropriate.

“Prime Lighting” is possibly the most angsty Brother Oliver song to date- and it’s our biggest crowd-pleaser at shows, a bit to our surprise. The song meaning is meant to be heavy. It’s loosely about people hurting and mourning while the political mainstream are posing for cameras.

“There’s ash and there’s sackcloth at the foot of the shrine,
But the camera was ready and the lighting was prime.”

Instrumentally, the song has a high-speed car-chase feel to it. Like some bank robbers on the run or something of the sort. We’re really crossing our fingers here for that blockbuster soundtrack debut!

“Pleasant Dr.” is meant to be an emotional, soft ending to a pretty anxious record. It’s also the name of the street where our apartment studio is located- the spot where we wrote most of the album. Instrumentally, the song features Stephen on dulcimer and Andrew whistling through a Danelectro Dan-Echo delay pedal, at the same time playing a modulated synth bass via keyboard. We wanted to leave the listener with a nice change of pace as well as a little flicker of audible hope. This song will serve as the transitionary mood going to our next record.