“Midnight Rain, is a bluesy ballad shouted from the very depths of singer, Alan Jones’ soul. It’s a song about moving on from a love lost by knife-twisting betrayal. Midnight Rain showcases the band’s earnest songwriting as well as their technical chops. – Fifth Freedom

The band released their sophomore full-length effort Heartbreak & Hellfire on July 26, 2016. The album debuted at #58 on the international iTunes New Rock Album chart. In New England, the album remained #1 on the weekly Top 15 local selling releases chart at Bull Moose Music (A 12 location New England Record store chain) for 10 weeks and achieved the top selling local record of the year.

On August 28, 2017, Fifth Freedom issued a limited run of Heartbreak & Hellfire on mystery colored vinyl. The release debuted as a #1 local release at Bull Moose Music stores for two weeks and remains on the top 10.

Heartbreak & Hellfire was recorded by Jonathan Wyman at The Halo Studios in Windham, ME and mastered by the Grammy Award winning mastering engineer Adam Ayan and the renowned Gateway Mastering Studios in Portland, ME.

“Heartbreak & Hellfire delivers a full breadth of songs that range from heavy rock anthems like the albums opener “Battle Cry” to earnest bluesy ballads like “Midnight Rain” that shout from the depths of front man Alan Jones’ soul. The album captures lightning in a bottle of how it feels to be heartbroken while at the same time angry and determined to overcome.” 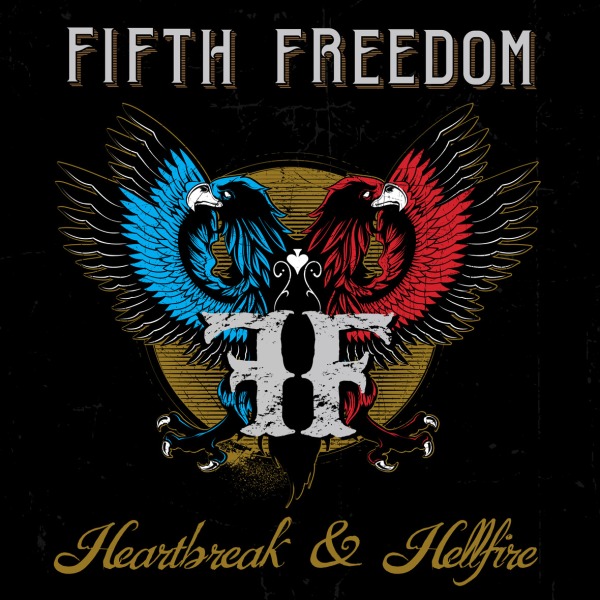 The Portland, Maine based four-piece brings a modern attack to classically rooted rock with a bluesy swagger while maintaining the dynamics of contemporary hard rock and metal, making them a favorite of active rock, southern rock, and metal fans alike.

In 2014, Fifth Freedom Released their self-titled debut record which debuted at No.1 at Bull Moose music (a 12 location New England record store chain), The band embarked on a two-month tour across the United States supporting the internationally known group Black Stone Cherry which earned the band national attention and airplay on both college and terrestrial radio.

Long-time members Alan Jones (vocals/guitars) and Gary Marston (drums) stayed the course while the band endured some line-up changes. In 2015, the band was joined by Ian Dyer on guitars and Seth McClellan on bass which activated a new energy and focus within Fifth Freedom that transposed into powerful new songs and live performances.

Fifth Freedom is currently playing shows throughout the Northeast in support of Heartbreak & Hellfire album and has plans for a more expansive tour in 2018. Visit www.fifthfreedom.band for details.