(October 16th, 2017) – Central Florida indie rockers Glass House Point have officially announced their upcoming EP Midnight Appetite, which is set to drop next week on Friday, October 27th. The band’s insatiable appetite for sharing fresh tunes truly knows no bounds, as the band has additionally announced a corresponding promotional tour for the album, aptly titled “The Midnight Appetite Tour.” The tour, which kicks off on October 28th, will take the band ’round their homestate and respective surrounding southeastern areas throughout the end of October and early November.

Don’t let Glass House Point’s name fool you- the 4-piece is anything but fragile in shape and quality. Backed by crisp harmonies, synths, and string ensembles, Glass House Point has meticulously crafted a sophisticated, yet untamed sound that will easily nestle into the confines of any and every cranium.

“Our new music is, collectively, more thematic and focused than anything we’ve ever done,” states the band, “It’s us introducing what we have become and debuting ourselves on a bigger stage.”

Midnight Appetite will be their latest endeavour, following the release of two late-summer singles: the Spotify hit “Creatures…”

…and its powerful follow-up single “Polaris”

-both of which are featured on the upcoming EP. 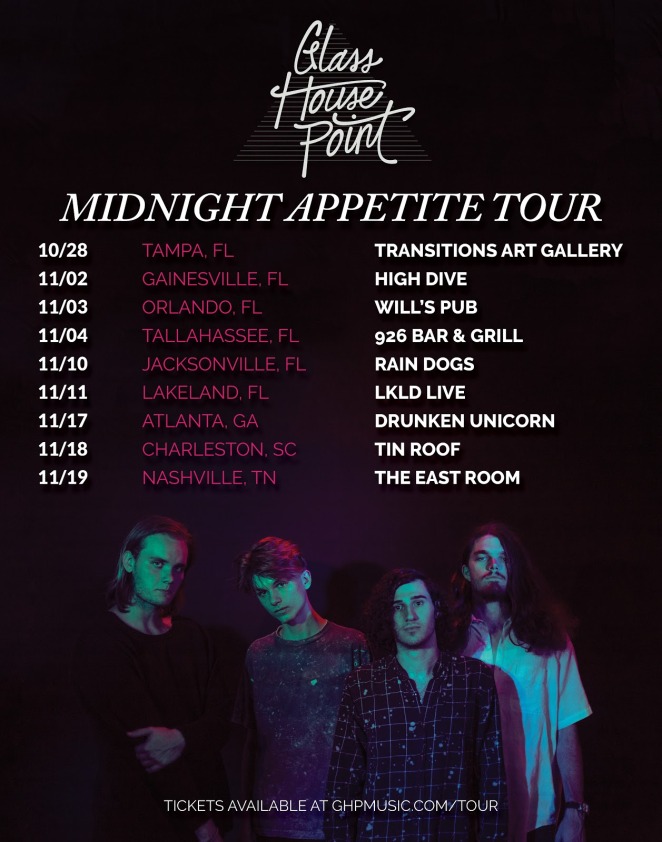 Glass House Point is an indie-rock band hailing from the tropics of Central Florida: a place riddled with abundant sunshine and torrential rainfall. The band formed during the particularly stormy Summer of 2013 and has since cultivated a sound that completely defies the expectations of East Coast music culture. Ambient swell and soothings lulls put Glass House Point’s music into a category of its own: a category that has yet to be explored by today’s indie artists. The band’s past ventures include extensive US tours and the release of their debut record Love Lives in Dark Places (2016). Most recently, Glass House Point has recorded their sophomore EP with Grammy-nominated engineer & producer, Aaron Gandia. Glass House Point recently embarked on the “Think Fast; It’s Gone” Tour. Midnight Appetite is available for purchase and on all streaming platforms on October 27th.