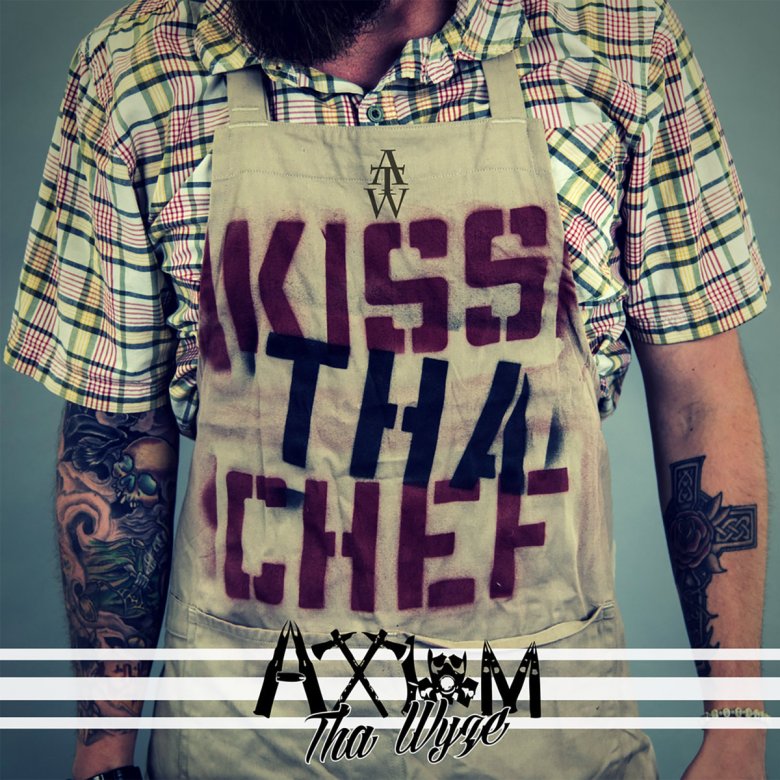 There’s an age-old adage within the hip-hop community: “If you can’t stand the heat, [then] get out of the kitchen.” Those who spite fire and serve it up, fresh out the oven like a brick-oven baked pizza are crowned amongst the finest within this proverbial statement. Plenty of rappers and emcees the like can spit fire- what makes it gold is how you add your own flair to the recipe. It takes more than 808s and a sense of rhythm to season your game to perfection. That’s where Idahoan emcee Axiom Tha Wyze comes in to play with his new album Kiss Tha Chef. Fresh ingredients in the form of funk-driven beats and new takes on age-old topics make for this rapper’s oddity in commodity. Kiss Tha Chef is a surefire lyrical odyssey- an Epic of Western honesty. Axiom’s maxim hits far from lyrical acrobatics the likes of Blackalicious, Gab, or Heiroglyphics. Rather, this emcee caters his metaphors to the working man’s needs: encompassing enough creative spins to keep every listener on their toes, but staying steadfast to his earthy, red-tinged schist roots.

Today, we have the pleasure of presenting the official track-by-track commentary of Kiss Tha Chef, penned by Axiom Tha Wyze himself! As always, each song is embedded with its corresponding description, as well as the whole album available for streaming below, courtesy of Spotify. Sit back, slide your headphones on, and slip into Axiom’s most creative work yet. Enjoy!

“Slow Down” starts with the sound of food sizzling on a grill. [I was] pushing for the laid-back summer vibe. This song initially started out as the title states- that I need to slow down and appreciate the friends and family I have in my life. However, as I kept writing the song, I realized just how much more I want to be able to accomplish and I need to move faster to achieve those goals. Sometimes I have the end in mind when I start writing a song- this is not one of those songs.

The producer [that] I have been working with lately, Cary Judd, took a sample of my vocals from a previous track we recorded and made the melody for this instrumental. Since it was my voice he used, he gave me the beat. Since he was giving me the beat, I told him I would write about whatever he wanted me to. At the time, he was currently laughing at “basic” people he saw on his FB feed, so that was the topic. From there, I made a list of “basic” traits and threw as many of them as I could into the song. We brought in a close friend to add extra vocal samples of a typical “valley girl” type character for extra ammo. Then I personally chopped up the vocals and made the hook (arguably one of my finer producer moments).

This beat was originally supposed to be the title track to the album; my friend from Brooklyn, Dan Dillinger, hooked me up with this one. However, when I listened to it over and over again, I kept getting a different vibe, and it was a more chaotic song than “Kiss Tha Chef.” This song is about the chaos of chasing a career in music- unless you are a musician, [very] few types of people understand just how strenuous it can be. This song mentions the numerous distractions I face while trying to control everything and sometimes, in order to make progress, you have to let go of control and embrace the chaos.

“Demons” has a very personal tone to it. I have had numerous people close to me suffer from serious depression and other mental illnesses, such as anxiety disorders, etc., and I wrote this song for them. As someone who has had a dark and depressing past, I can relate to the feelings of helplessness and isolation. Everyone has their own battles to fight and, for me, music and art was my way of expressing myself so I didn’t go crazy. It was also very therapeutic to write out how I felt about certain people or ideas. So, for anyone going through this, it is important to understand that you are not alone; there are people out there who sincerely do care and that it is important to let out all the pain and anger you have inside through healthy channels.

This song falls in line with the braggadocious type tracks that Emcees need to drop on occasion. Making the comparison of battle rapping and performing as going to war- an Emcee has certain skills he uses, as a soldier has certain weapons he uses in combat. The Emcee displays these skills on stage: confident presence, control of the crowd, creative lyrics, and so on. Since this track had WAY too much energy for one person, I brought along my brothers from The Earthlings crew, Andy O. and Zero, to contribute their flawless skill as well.

Fuck Donald Trump! Okay, this song isn’t about him, but it was written during the presidential debates and it was very frustrating to watch. The way they pit people against each other for their own selfish agenda, causing more division amongst Americans rather than uniting them, as well as distracting them rather than facing real problems- it made me want to jump, stomp, kick, and fight. I want to hang out with anyone who supports my music- even Trump supporters. I don’t care what religion, race, or sex you are, we can all get together and have a good time.

Hip-Hop culture has always had an ongoing metaphor: “Can’t stand the heat, get tha fuck out tha kitchen!” This includes numerous metaphors in which cooking is compared to music. This song is my contribution to the mix. I used to be a cook at Smashburger on-and-off for about 3 or 4 years, so the banter of a line cook is thrown in the track as well. I worked with a few Hispanics, so all I really learned was how to insult people and tell them that someone took their girlfriend. I additionally throw in references to making music-

“First, you spit it clean, let it cook through the compressor,
like the beef on the grill, gotta flip it with some cheddar.
Time is of the essence and the crowd don’t want no kinda-dope,
Post-cook garnish, imma sprinkle in the Izotope.“

– Izotope being the plug-in I used to enhance the vocals on this track. Creating music is veyr much like cooking a great meal: there is a lot of prep time and ingredients that go into it and if you are really good at your craft, then you can get creative and make something FRESH and new.

“Straight To My Head”

The hook to this song was written many years ago by a friend of mine (and the singer), Chris Crawford, and we used to bullshit around the compfire singing the hook and making up verses to it. After a few years, we finally turned it into a real song. I wrote numerous verses to this song until I finally landed on a direction that I liked. I wrote the first verse while on tour in the South (South Carolina, to be exact), where I had plenty of time to contemplate my current life situation, how I felt about our country, and reminisce on the friends that have come and gone while pursuing music. I wanted to add another perspective to the song because that was the point- I have my views, but they aren’t fact, they are just MY views. So, to get the point across, I added Andy O. to shed some light on his perspective as well and he nailed it! “Straight To My Head” is one of my personal favorite songs on the album.

“Keys To the City”

As mentioned previously, the instrumental was given to me by my DJ Auzomatik, and I knew instantly that this was a summer-time-cruising-through-the-city-with-the-windows-down type of jam. So I put the people on the track that would achieve that vibe: Darian Renee and Sayso. They killed it!

On my last album, I wrote a song called “Snakes in The Grass,” which discussed a variety of shady characters you come across in the music industry, from corny Emcees trying to bite your style to shady promoters trying to make money off you without compensating. This song is pretty much a continuation of that song, combined with the very talented Danny Blaqk who made the original version “Serpent Tooth Man“ along the same topic. So we combined forces and made a remix.