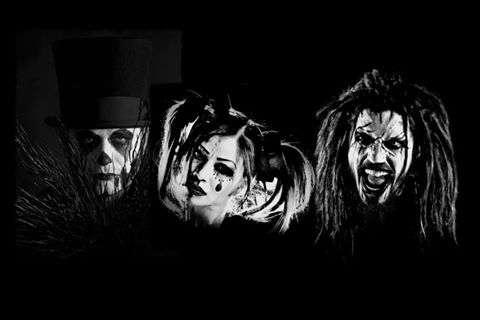 (March 20th, 2018) – The wait is over- Californian theatrical metal group Raven Black have just announced pre-order information for their highly anticipated second album 13. The visually and aurally garish quartet has also released the pre-order information for their debut comic book, A Dark Metal Carnival: The Beginning in tandem, as well as undertaking booking their Spring tour (set to launch in May).

Pre-orders come with the following perks and exclusives:

Raven Black’s history is a sordid tale of magnanimous horror- of which the complete details remain a tad, er… fuzzy. What tangible evidence we do have has allowed to piece the outfit’s ornerous history thus far: A Voodoo Doctor- conveniently named “The Doctor-” came across a girl (“Raven”) who looked lost and scared, crying in the alley way behind his lab. He used his magic to turn her into a doll, but his spell was disrupted from her terrifying and taunting screams. The frightful result was a creature that remained half-human, half-doll. As Raven lived in the dark world of the Doctor, she secretly learned his magic and conjured up a demon, Muppet, who she made her eternal protector and trapped him inside her heart. The Doctor and Muppet created Stitches to search for those who are looking to join our dark world in the 13th hour.

From there, a topsy-turvy whirlwind of adventure in the delightfully demonic. Raven Black released their first Single, “Died Inside” on September 7, 2013 at The Roxy, selling out the venue that night. They continued to work in the studio and released their first EP Midnight Dreary in June 2014. From there, the lineup was refined and restitched, coming together in 2016 with a fresh creature off of the slab and a new EP dubbed Seven Sins and a slew of tours across the US and Mexico. More cities meant mroe fans, and a revamped production level filled with lucrative new songs and props to add to their captivating stage presence. Their new embarkment in the world of twisted creativity comes in the form of 13– a luckily unlucky number that is sure to stand as testament to their relentless ascension of innovative heights.

So what will this mean in relation to the band’s future endeavours? Of course, this will surely mean a tour across the U.S. and performing the new tracks from 13. There will also be a new music video coming this early Summer. Who will they be touring with this Spring? It’s still a secret- but one worth the wait! Stay tuned for the upcoming tour dates.