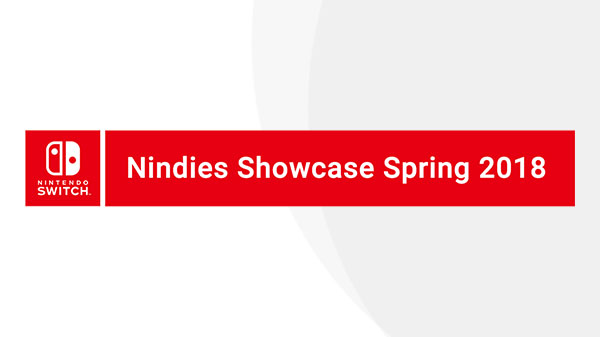 We knew going into the showcase last week that some of the big hitters like Hollow Knight and Bloodstained: Ritual Of The Night wasn’t going to be included. Which meant we really had no clue what was going to be shown off in the first Nindies Showcase of 2018. So without further ado, let’s get into what was shown off in the roughly twelve-minute Direct!

Damon Bakar (Senior Manager, Publisher & Developer Relations) opens up the Direct introducing himself and how it’s hard to believe it was a year ago that he was showing off indie games they had coming to the Nintendo Switch. He goes on to comment on the Nindie community transforming into a family over 2017 and continuing to grow in 2018. He then sets us off into the first trailer with a “subtle” hint.

Reacts That Hertz: Short, sweet, and to the point. I’m a fan of Bakar’s and wish he would show up more on the regular Nintendo Direct. I do wish he had reminisced more on the past year and how the Nindies have had success story after success story on the Switch. There is still a potential outro segment for that though.

Mark Of The Ninja Remastered

Reacts That Hertz: Not much was shown and with a fall release window it may be a while before we see more of it, but if the game is anywhere near the graphics the teaser gave this could quickly be on my watch list. With that said, we all know pre-release teasers and trailers does not always represent the final product.

Reacts That Hertz: It wouldn’t be a Nintendo production without some cringe, and here we are with Kirk Scott sneaking into the shot with Damon Baker. Then came the above jokes, mercifully they quickly transitioned to the next game. A clear case of Nintendo doing Nintendo things in Nintendoland. My body is ready for these moments at this point.

Reacts That Hertz: A Street Fighter/Mortal Kombat-esque fighting game slated for the summer. Another relatively short look but the game looks like it could appeal to fans of the genre who probably wont see the latest games of the aforementioned franchises on the console. Not my cup of tea, but that’s why we have the freedom of choice!

Reacts That Hertz: A musical bullet hell game?!?! My interest is intrigued and that’s before its announced that the game has local and online co-op AND a full campaign mode! It’s slated for a (first on Switch!) summer release window and is near the top of my Nindie Watchlist.

Reacts That Hertz: A spring release window game from a top down perspective that’s going for an old school DS look. The quick (noticing a trend?) look doesn’t give us much to go on but it doesn’t seem like my style and the Direct at this point seems to be hurting from the lack of big names to showcase.

Reacts That Hertz: “It’s weird and crazy,” you couldn’t have put it better Kirk Scott. It’s some type of pool game where you play as the cue ball? I was really confused and it just seems like a play on Golf With Your Friends. It also has a general 2018 release window which isn’t too encouraging as well. It is a system exclusive though, so it has that going for it.

Reacts That Hertz: A platformer where you are a Chicken that lays bombs to get through the levels. I mean I’ve heard worst ideas…like Pool Panic… Anyway, the graphics look decent enough and I’m sure it could be a nice time killer during the summer months when it’s slated to release. Might be worth keeping an eye on, especially for an on the go platformer to pick up and put down at ease.

Reacts That Hertz: All PR speak aside, it’s basically Tetris with techno beats and the usage of HD Rumble. I do commend the game for being the first of the Direct to explicitly state HD Rumble usage. It feels like that specific feature on the console is sorely underused. With a spring release window it should be hitting in the next three months so it won’t be a long wait for basically Techno Tetris.

Reacts That Hertz: The Tinder of ruling a kingdom. All jokes aside, this seemingly simple strategy game likely has complex layers behind it and seems interesting. With that said, the replayability factor will need to be high or it’ll start collecting dust quickly. This spring release window game will be monitored on my end for sure.

Reacts That Hertz: Probably the highlight of the Direct for me. A platforming game where you make your own platforms to transverse through the levels. It’s coming first to the Nintendo Switch this spring and I’m squarely on the hype train. (Choo Choo!)

Reacts That Hertz: A stick figure RPG with slapstick comedy, there really is a game for everyone out there. It’ll release in the spring so if you fancy this sort of game you won’t have to wait long, pardner! With that said I wouldn’t mind seeing more from the game before completely writing it off as not for me.

Reacts That Hertz: It looks nice and platformers are made for handheld consoles in my opinion but it seems they focused on making the game primarily co-op. Sure they mentioned it can be enjoyed solo, but the game design and the way it has two main characters just seems they are pushing you towards the co-op route. Nevertheless I’ll keep my eye on it for now as it does look really pretty.

Reacts That Hertz: An 8/16 bit platformer, like the world is starved for this type of game nowadays. Maybe it’s just not my taste nowadays, I’ve only been able to play and like Shovel Knight of the 8 bit indie games, but I do get why there is a base for these games. I enjoy the fact that you’ll be able to have 16 bit areas so that’s at least a welcome change. It’s a summer release window game though so it’ll be a bit of a wait.

Reacts That Hertz: A real-time strategy rogue-like game where you lead troops into battle. I mean, A+ for uniqueness, but the graphics again look simple and a bit bland, and I’m not sure how the two genres will mesh gameplay wise. We will have to wait to find out though as it’s not slated to release until the summer.

Reacts That Hertz: I’ve never played the series but with the third game coming this summer and the first two coming “soon” to the console it may be time to set out on a saga of enlightenment! With your choices being able to carry over between games as well you’ll be able to be fully immersed into the world for the entire trilogy.

The indie partners get thanked before the viewers are thanked for watching. We then get a montage of all the showcased games.

Reacts That Hertz: Again, a short, sweet, and to the point outro. The roughly twelve-minute Direct had some gems, some traditional Nintendo Cringe, and some traditional “what am I watching” reveals but all in all it was a fine Nindies Showcase to begin the year. I do think they needed at least on big hitter that had an extended slot. Hollow Knight or Bloodstained would’ve been perfect here or even a big reveal we didn’t know about. Now the wait for E3 begins as we likely won’t get another Direct until then unless the Pokémon Switch game is releasing this year.