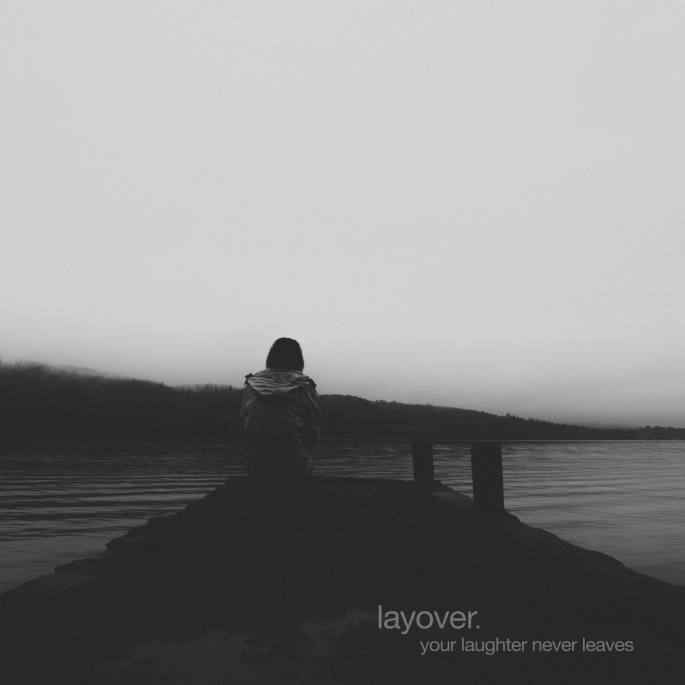 When faced with the task of recollection in regards to our past and present experiences, we have two choices: we can either run from them in determined ignorance, or we can face them to learn from them. Of course, one option is much easier; the other unbearably uncomfortable to even consider. However, when we give ourselves the time to sit with our personal issues and work through them, we can find that our ghosts seem less like haunting spectres and more like explorations of imprinting emotions. The process can be heartbreakingly beautiful and limitless in terms of moving forward, and it is a process that the Birmingham emo quartet Layover is venturing through in their new EP Your Laughter Never Leaves.

Where wading through the waters of our own self-obsessive doubts and bumbles, our mental hurdles and burbles can be painstaking, Layover is keen on weaving a meticulously daring soundscape flushed with melodic licks and tempered lyricism that is designed to lap against our trembling feet. Set upon heart-wrenching emotional volatility and explorative melodic fugues, Your Laughter Never Leaves is a soundtrack to a  lasting psychological imprint- a snapshot of a moment of deep reflection that is poignant and pointed in a life-long road to recovery.

Today, we have the extreme pleasure of presenting the official track-by-track commentary of Layover’s Your Laughter Never Leaves, penned by vocalist Luke Rainsford. As per usual,  a complete album stream can be found at the bottom of the article, courtesy of Spotify. Enjoy!

Hunger Pains was the first song we wrote for the EP, and we class it as a bridge between our older Pop-Punk style, and our newer Emo vibes. Originally, Brad and Dom were messing with the idea and it just kept developing over time. Even though it’s our oldest song, we still changed parts of it over a year after we first wrote it, so we’re super happy with how it’s developed.

The song is about how I was in a really bad place with my mental health and the guilt that surrounded me about dealing with it whilst my Mum was struggling with the late stages of terminal cancer. Lyrics like, “I’d never want you to know just how much I was hurting, ‘cause it’s nothing compared to what you’re facing,” show how I was hiding a lot of the things I was struggling with at the time, such as self harm and suicidal thoughts, even though in hindsight it was something I shouldn’t have been ashamed about, and is something that we have tried to express openly on the entire EP. This song is one of our most energetic songs and it’s so fun to play live because of it.

This song was pieced together in two halves. We had the first half of the song, and were joking around with some tappy guitar parts for fun, but we ended up really liking it, so it stuck. We’re really stoked on how the song goes from a Pop-Punk vibe to a bouncy Emo style at the end, similar to “Hunger Pains,” and it’s one of the songs that’s most enjoyable to play on the EP.

The title of this song is in reference to how I used to take my Anti-Depressants along with coffee in the morning. Even though the song itself is mostly about relying on people too much to cope with my mental health, it is written about a particular friendship with someone that happened during one of the worst parts of my treatment, and how a lot of people struggle to help their friends who are going through a bad time. This song is mostly about a friend who was also struggling with their mental health and about how we were both too ill to support each other through a difficult time, and she ended up having to break off the friendship. This song isn’t a break up song, and it’s not intended to sound like I believed I was entitled to any sort of friendship or support from her, instead it is more about the sadness of my mental health affecting my close relationships with people and about how a lot of my coping mechanisms were built around having people there to support me.

We’ve always loved having short songs, so this song was super fun to write. We’re so proud of the interesting rhythms and time signatures we used, without it sounding too strange. I’m also super happy with how the vocals came out, too. Musically, it’s just full of interesting patterns and rhythms, especially on drums. I feel really lucky to be able to fit vocals over some super talented musicians and [I’m very thankful for] the fact they let me pour my heart into songs like this with a more instrumental focus. We’re super proud of how the first half of the song is very focused on the instruments, whilst the second half becomes more vocal focused, as it ends up being sort of like a short highlight reel of what we can do, which means it’s incredibly fun to play live.

This song is about feeling incredibly uncomfortable in the skin you’re stuck with, and just wishing I could be anybody else. A lot of the time I feel as though my experiences that have contributed negatively towards my mental health have all been things out of my control, and it can be easy to believe that the world is out to get you. This song is my way of saying how I feel as though I’m alone in my struggles. Even though I know that’s not true, it’s very easy to think that on the bad days.

We wrote Slumber together in Elliot’s small home studio, not long after we reformed, and it came together so naturally. This is the one song on the EP that didn’t take much effort to write, it just sort of framed itself in an incredibly simple yet effective way. It’s probably the most simple song on the record, but the most emotional vocal wise. When we wrote it, we only had the first finger picked riff, and just built it up in the space of an hour or two. This song is so incredible to play live, just because of the raw emotion, and we’ve seen so many people cry or become incredibly emotionally invested in this song whenever we’ve played it live.

I wrote this song about the loss of my Mother, more precisely about the night I was told via phone call about her passing away. Throughout the song it’s written as a kind of open letter to my Mum, detailing my regrets about not spending enough time with her or telling her how I felt enough. I have always been unfortunate enough to buy in to the stigma around expressing emotions in Men, and at the time of my Mum’s passing I was always very awkward and almost ashamed of being open emotionally with my family. This is something I’ve moved past, as I’m now extremely comfortable with admitting when I feel weak, and this song was definitely the turning point for that. There is definitely still reference to my mental health in this song, in the lyric, “I stare at your ashes and wish I was taking your place,” which is in reference to the strong suicidal feelings I had at the time – mostly dealing with the struggle of having to see someone I love pass away whilst also having difficulty with my own thoughts on mortality and death.

This song was the last song we wrote for the EP and it was initially a little rushed. We ended up piecing together loads of little ideas we had for other songs into one piece and we ended up with one of our favourite songs on the entire release. The chorus of this song we believe is super powerful and catchy, and musically there are a lot of really cool melodies on the guitar that compliment the vocals so well. I’m personally super proud of the call and response style of the guitar and vocals in the intro, as well as the way some of the higher lead style parts of the chords in the chorus sit under the vocal melody. Mostly we’re just really proud of the mood and the vibe this song conveys – especially in a live setting. It is both somehow chilled out, yet bursting with energy at the same time; it’s very cathartic to play.

The lyrics of this song encapsulate the themes of the entire EP, which is why we decided to go with it for the EP title, as well as the closing track. The lyrics “your laughter never leaves” and “who would ever guess that I would end up sentimental?” are based around knowing that even though somebody is gone, they will always be present in my life. Specifically, it’s about feeling my Mum’s impact on the decisions I’ve made and how I still remember all the amazing times we had, which can make things a lot easier when dealing with my bad mental health days, or days where I get upset about her passing. “I’ll never crack a smile again without picturing your nicotine stained teeth” is my way of saying “whenever I’m doing something that makes me happy, or having a good day, I know that you’d be proud of me and smiling too.”