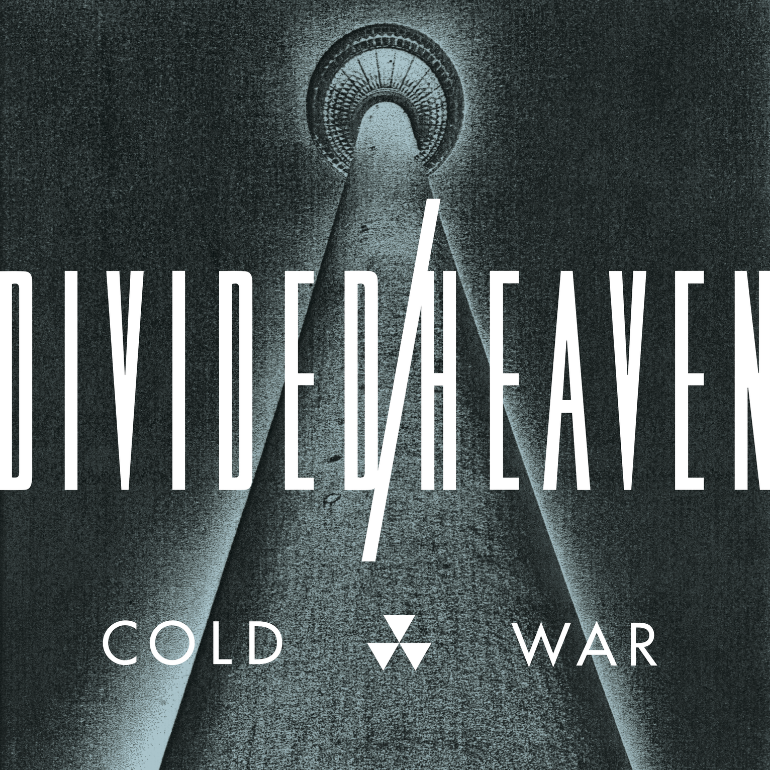 A Cold War is defined as an intense economic, political, militaristic and ideological rivalry between two nation states that falls just short of open military conflict. Some may remember the most famous conflict of this kind- dubbed simply the Cold War- as the post-World War II rivalry between the Soviet Union and the United States. Conflicts of this variety are harrowingly acute in their vexations- the sort that will leave visible imprint of stress set behind your skull. It’s a continuing state of resentful antagonism that always just falls short of the relief of destructive calamity. The result of such a dichotomy is an ex-post-facto trauma, a seething sore that never quite heals and just misses infection-  an all-consuming weary state of being continuously on the edge.
Such is the characteristic state of three-piece punk rock outfit Divided Heaven’s new album, aptly titled Cold War. In previous years, Divided Heaven was a posterchild rowdy punk outfit, as earmarked by their previous albums A Rival City (2011) and Youngblood (2014). Cold War– despite the meaning of its namesake- features what frontman Jeff Berman has classified as its softer, contemplative side. The album, according to Berman, “encapsulates my feelings of desperation in troubling times of trying to stay sane and creative at the same time.” Indeed, these notions and motions fo life are readily reflected in the albums soundscapes. Hauntingly desperate, eerily peaceful, Divided Heaven’s latest iteration is every bit of calm as it is calamitous- a mile marker of artful peacekeeping, with Cold War procuring a lasting imprint of the polarity of a tense reality as its namesake supposes.
Today, we have the pleasure of presenting to your eyes and ears the exclusive track-by-track commentary of Divided Heaven’s   third LP Cold War, out now on Wiretap Records. As per usual, an accompanying complete album stream can be found at the end of the article, courtesy of Spotify. Enjoy!

Short and sweet intro. “Fire” sets the lyrical tone for the record; I fight for love and my words are my weapon.

“Home For the Summer”

I wrote this song while mourning the loss of a close family member as an attempt to feel calm; to feel a brief respite from the mourning process; to shed my old skin and feel new and alive again. “Home For the Summer” is a loud, energetic, anthemic ripper about pursuing your art in a new direction. Divided Heaven is known for being a solo endeavor for me and this song is meant to fucking obliterate that notion and be a mile marker for the band and for Cold War.

“1983” is a song I wrote about having Stockholm Syndrome with my own mental illness. A couple years ago I was working on through many of my issues and I reached a point where I truly felt better. Along with that feeling of relief and tenacity, I oddly felt like I was missing a part of my self-identity. So much of myself had been wrapped up in that struggle that- when it was over- I felt I was missing part of myself.

“The Daughters & The Sons”

I wrote this song as a tribute to the strong-willed women in my life (my wife, my sister, my mother, and my best friend) that have made me into the man I am today. My best friend—a badass mother of 3 young kids—was arrested during a peaceful black lives matter protest, standing up for her friend. She said she did that to set a good example for her kids: for young girls to have confidence and speak again injustice, and for young boys to learn to respect women and to grow up as compassionate young men.

This might be my favorite song on Cold War because it best captures a fleeting feeling I frequently wrestle with in my writing. When I think about the cities where I used to live –particularly New York–and I see how it changes so fast; it feels like I wasn’t ever really there, and the my time, energy, blood, sweat, tears and rent I put into it is just met with indifference. New York inspired me and meant more to me than I did to it and that’s difficult for me to sit with, sometimes.

Building a life together with someone, being so close to marrying them and then watching it crumble and end; watching a loved one—once so vibrant—wither away from cancer and die: how do we cope? I didn’t cope well and I fell into old bad habits. This is about me, my relationship, my relationship to one of my closest friends and…it is rather difficult to discuss sometimes.

“Maeby, We Should Say Goodbye”

This coincides with “Dance With Old Habits…” Feeling desperate, scared and distant from the person you built your entire life around…Well, I came to terms with the fact that I no longer love them. We put spin on it with the spelling, giving a shout out our favorite tv bae, Maeby Fünke.

“You Will Never Get Rid of This”

Pure and simple, plain and mean; this is a fuck you to an ex. We really wanted to write a catchy riff with a frantic energy and did so with this Side-B opener.

This song is my hope to balance the constant struggle I fight against anxiety and depression in the face of getting older. Hiding in pills and booze doesn’t work as well as it used to. It references my late-friend, Andy, as well as my good friend, Mark McCabe.

This song captures that feeling of helplessness I felt when—after I had moved away from NYC a few years prior—I knew I got more from it than I could ever repay.  “Delancey” couples with “Love Letter to New York.”

This song is about feeling like I was born at the wrong time in history. I feel as if I was born too soon for the tech boom and born too late to enjoy the world of GenX’ers as an adult. This song is my humorous way of feeling like my class of 2000 is the middle of two generations, of which I don’t particularly feel like I belong to either of them.

“Stay What You Are”

This is love song I wrote while always on tour, away from my love. References to Saves The Day and One Man Army lyrics really make me smile. While playing this song in Germany, a couple got engaged! It was the sweetest moment as I began to play the bridge and Dominik got on stage with me and began to speak (in German) to the crowd. I had no idea what he was saying until I heard gasps of love and joy ring throughout the room and he proposed. The celebration began immediately I didn’t even finish the song, haha!

This song is the sweetest I’ve ever written. As I said in my wedding speech, I initially wrote this song about my apprehension about getting married. This song was my heart telling my brain that I should marry Kate, who is now my wife. This song put to rest my hang-ups, my inhibitions, and my fear.