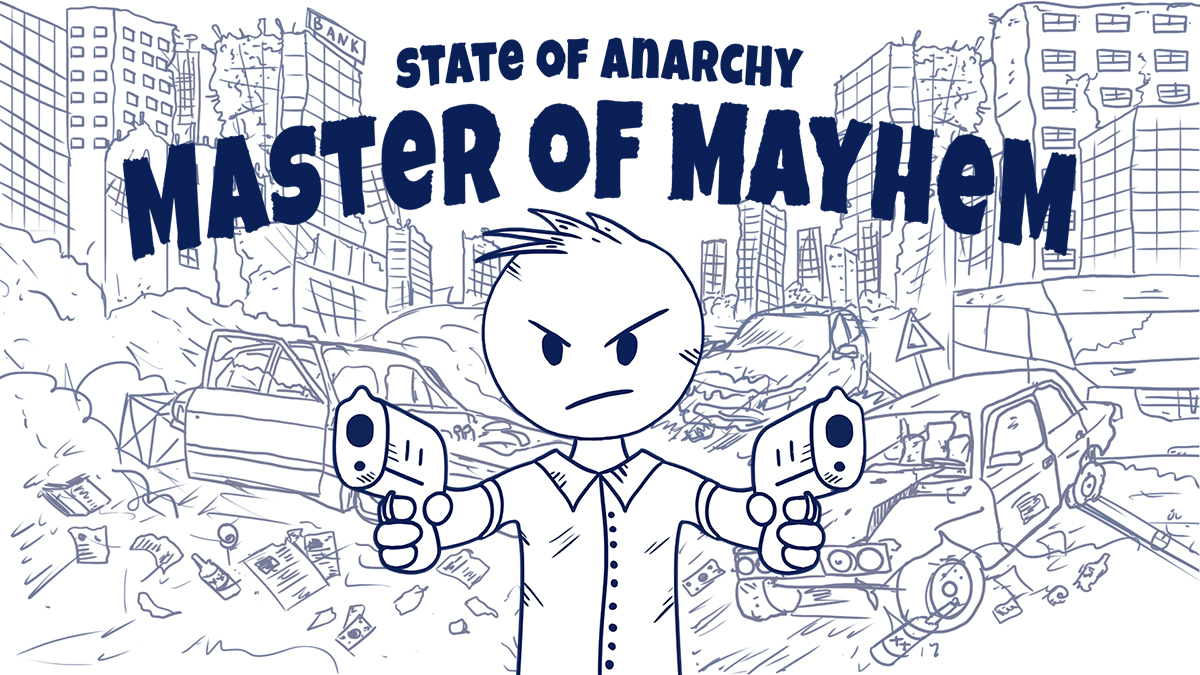 What would one’s response be if an alien attack descended onto their town and brought with it anarchy, rioters, and sheer mayhem? I, for one, would welcome our new alien overlords with open arms. Others, like the main character in the Lapovich-developed and Sometimes You-published State of Anarchy: Master of Mayhem, would rather take up their guns and car, and take on the rioters and aliens face-to-face. State of Anarchy: Master of Mayhem is a crazy, almost manic, doodle-art top down twin-stick shooter that features RPG elements along with “awesome rock music.” Personally, I do not welcome generic rock music being labeled as “awesome,” but that could just be what the alien overlords wants me to say. Regardless of your thoughts on the background music, this is about the game and whether it is worthy of attention, or yet another middle of the road shoot ‘em up on the Nintendo Switch.

As far as game play is concerned, it is what the player would expect from a twin-stick shooter. The right stick is used to shoot the primary weapon while the left stick moves the character. It also has a secondary weapon than is used by pressing another button. What separates this game from the others is that the character can walk (painfully slowly) or drive a car while shooting. While driving, the player can run over enemies while most likely being chased by enemies in cars by their own while heading to the next boss destination. This is a fun, unique addition to the genre that is only ramped up by the background music that I welcome with open arms. The music has a bit of a surf rock feel to it and really gives the sense that the player is in a car chase. The music is boring when the player is stuck walking, a characteristic that worsens with the slow-moving character, thereby forcing the player to listen to mediocrity for a longer than needed time.

The progression of the game seems fair overall. From the story, which starts with a cute short cut screen but does not overdue the cut screens, to the RPG elements mentioned above. Depending on an individual’s thoughts, the lack of consistent story beats between levels, or why there is a certain boss where they are, can be positive or negative towards the game. Personally, in this type of game I just want to kill enemies and not sit and think too much, so the presented story elements are just fine with me. The player also seemingly picks up new weapons after every level for a nice little progression there, even though it does not give enough time to use each upgrade. The RPG elements – where the player can increase speed, fire rate, etc. – are ideally paced, but with an early difficulty it does seem there could have been a better way to allow for more upgrades after each level without grinding.

Again, these types of games are best when the player is just killing enemies and not having to worry about grinding. The most glaring issue with the game, though, is how unfair it feels at times. The character’s bullets have a limited range, which is all fine and dandy, but then an early boss has bullets that have unlimited range and in such a tight cluster after being able to easily handle every enemy before it. The player will die at least several times and begin to grow frustrated before either eventually slipping by or grinding to level up. This difficulty spike might have been thought smart by the developers, but it feels a bit too much too early. With forty-eight levels in the game, this pacing issue puts a sour note on an otherwise solid progression track in the rest of the game.

State of Anarchy: Master of Mayhem does a lot of things on the positive end of the spectrum with a few things on the negative end of the spectrum, but nothing really stands out. If I want a shoot ‘em up game on the Switch there are plenty of options, especially if the player is looking for under the radar releases like Black Hole. On its original release on Steam, it got positive feedback and while I agree it is not a bad game, it is not a great game either. It is an above average game that would be best used as a filler game on long trips on between bigger releases when the gamer needs a change of pace. Unless the player would welcome their new generic rock overlords- then bump this up to an awesome game!

Review copy provided by Sometimes You; reviewed on the Nintendo Switch in handheld mode.