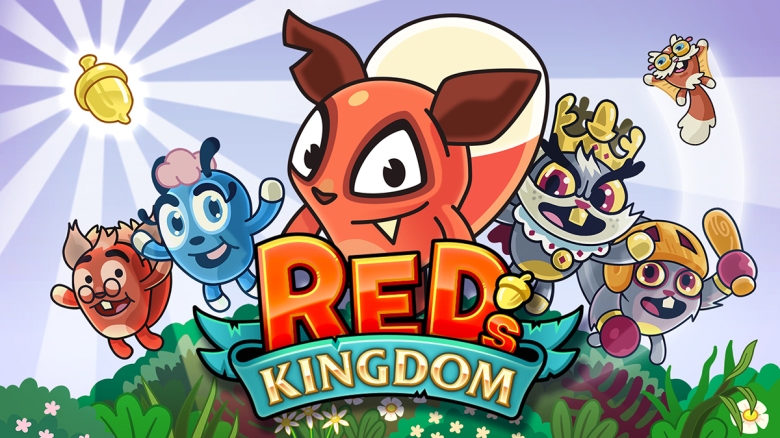 Ever wonder what it is like to be a squirrel that rolls around like a ball and collects acorns? I know! Me too! And our wish is fulfilled in Red’s Kingdom, a game that was initially on mobile and Steam before finally making its way to the Nintendo Switch. In this game, you control Red, an adorable squirrel who wakes up one day to find his entire Winter acorn stash has been stolen by Mad King Mac and his minions. To make matters worse, the mad king has abducted Red’s dear old Pa. Red sets out on an adventure across the kingdom to retrieve his lost acorns, rescue his Pa, and defeat the mad king once and for all. Does he succeed and, better yet, does the game keep you entertained while on this adventure? Only one way to tell, let us roll into the review!

Red’s Kingdom is a puzzle game where the main character rolls like a ball in a straight line until something stops him. You can only roll in four directions, so it is important to plan your route ahead of time as you traverse the multitude of areas in the game so as not to get stuck. Luckily, there is a reset button that returns you to the beginning of a room with all the components intact, as if you had just entered the area. Obstacles such as barrels, bushes, pillars, and trees litter the terrain in order to help you properly navigate the various landscapes. Oftentimes, many of Red’s precious acorns can be found spread throughout each level to give the player an idea of where to go and to give them something to collect. 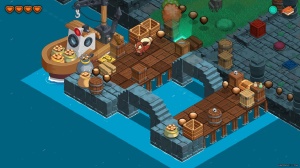 In later stages, there is terrain that cannot be crossed without special items to assist Red’s movement, such as a wing suit that helps him use ramps to jump over large gaps. As you progress in the game, the levels get increasingly difficult by adding switches and timers, and even introduce harmful elements such as spike pits, water traps, and molten lava. In addition, you will encounter many of Mad King Mac’s minions, some of which are really strong. Rolling into an enemy minion takes away from their health total, but it can also harm Red if not done correctly. Fortunately, there are restorative hearts spread throughout the game and there are even ways to increase your health total. The king’s minions, along with the many pitfalls this game has to offer, cause the player to have to consider every move before rolling into harm’s way.

The overall design of this game is surprisingly good for a puzzler. Red’s Kingdom features vibrant colors and amazing detail in its level design. I often found myself wondering if an item on the ground was part of the scenery or if it was a new puzzle for me to solve. Many aspects of the game’s environments have a medieval theme to them, often taking you in and out of castles, forests, and underground dungeons. The level designers did a fantastic job adding little bits of “flavor” to each individual room in the game, like a knife here or a flower there. On top of that, the character design of this game is so cute! Everyone from Red, Pa, and the various NPC’s who help them to Mad King Mac is simply adorable. The thing I looked forward to the most was watching the characters interact and banter with each other.

Speaking of good design: the music is definitely not what I was expecting. When outside, it has a whimsical feel to it that really matches the tone of the game. But then you roll your way into one of the castles and you will have to check to make sure you are still playing the same game. The castle music is more akin to something one would find in an RPG and I found myself not wanting to leave those areas just so I could keep listening. The sound effects are also implemented very well, as a sound is made literally every time Red rolls into something, with each collision sounding different depending on if he rolls into a wall, a box, or an enemy minion. Lastly, the character dialogue is an incoherent gibberish, but just like the visual design of the squirrels in Red’s Kingdom, it is cute and cuddly.

This game combines elements of a puzzle game with an adventure game. Critical thinking is often needed to traverse some of the more challenging rooms, while an element of exploration is also warranted. The player is on a quest, often receiving aid and power-ups from local NPCs and hidden treasure chests. There are rooms that you cannot even see until you roll right into them that offer more acorns or other collectables. Although the Nintendo Switch does not offer a trophy system, the game does have its own trophy page in the menu, which offers its own challenges for the more experienced player. COMPLETIONISTS BEWARE: There is a trophy to complete the game without dying and another one to complete it within ninety minutes. For reference, it took me over six hours to beat it and I have not even found everything yet. I also died way more times than I am happy to admit. With that being said, I had a lot of fun playing Red’s Kingdom. Every time I felt like turning off the game I found myself saying, “Just one more room. Okay, just one more. Okay, another…” With its simple gameplay, cute story, and challenging trophy system, Red’s Kingdom offers plenty of fun for casual and hardcore players alike. (Justin Singh; Game Reviewer)