While it may be 2018, yearly franchises have seemingly stayed strong through the changing culture of gaming trends. Activision’s Call of Duty, EA Sports’ FIFA, and Madden NFL are three of the biggest and best-selling games each and every year, despite the fact that none of them have even considered shifting to a Games As A Service model. The issue is that yearly franchises, almost by the nature of the beast, rarely see major fundamental changes from year to year. In regards to Call of Duty, most gamers will point to the four year span of 2007-2010 as the “Golden Era” of the series which saw the releases of Modern Warfare, World At War, Modern Warfare 2, and Black Ops. Modern Warfare was seen as a technical marvel at its time while being a major departure with it being set in modern day while World At War and Black Ops rose Treyarch’s profile greatly.

After that, the next three years saw series fatigue paired with two poorly received offerings in Modern Warfare 3 and Ghosts. Then Sledgehammer Games, along with Respawn Entertainment’s Titanfall, gave the series and first-person shooters a shot in the arm with Advanced Warfare and their addition of wall-running, jetpacks, and enhanced vertical movement. This continued for a few years, but series fatigue reared its ugly head once more. As such movement aspects began to enter more and more franchises and games, over-saturation took its mighty toll in the form of widespread disinterest and sent developers scrambling. Last year saw the series return back to its “boots on the ground” roots. However, Treyarch is bringing about possibly THE biggest changes to the series since the “Golden Era” with Black Ops 4. Not only have they scrapped the campaign mode that had increasingly felt tacked on as a tutorial for the multiplayer, they hopped on the Battle Royale trend that has taken the gaming industry by storm.

With the latter Battle Royale mode being named Blackout (as well as a bold move away from what Call of Duty is) it may also be the first signs of Activision testing out the option of growing the series into a Games As A Service series. Battle Royale games have fallen into two realms: the original militaristic flavor of H1Z1 and Playerunknown’s Battlegrounds, and the newer cartoonish flavor of Fortnite. Blackout obviously leans towards the former, with more complicated weapon attachments and needing backpacks for extra storage. This is perfectly fine, though, as Fortnite is a clear winner of the other side of the coin, but the original flavor never had an AAA studio give their take on it until now. Better yet, Treyarch has seemingly added their take on the battle pass from Fortnite to merge the best of both worlds into a mode that can be sustained for however long they want, rather it be as a Games As A Service or being cut out and made its own IP- something that Activision, quite frankly, could use.

The Blackout map itself is huge– the biggest map ever for a Call Of Duty game- and features several homages to past maps. The issue is that, due to the large map size, the player will be lost easily by no mistake of their own. More time in the mode will help, but the map could have used some trimming in the key landmark area to leave both more open areas and room for a second, or even third map. However, the biggest issue of the mode is the server issues and Treyarch changing the maximum number of players between the three options (solo, duos, quads) to see what works best in this environment that is completely new to them. Enough of the new kid on the block, though, it is time to discuss the grizzled veteran of the online multiplayer mode. 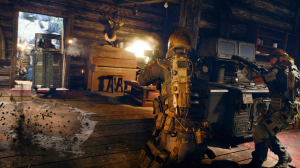 Luckily after the backlash of initially only having nine traditional maps last year, the count this year has risen to the more standardized 14, with another one being added next month! Another misstep from last year’s otherwise great game, the universally panned Headquarters community space and everything associated with it, has been completely wiped out and everything is back to being menu-based. This also has the added positivity of not only removing the highly addictive, free-to-play feeling daily and weekly quests, but seemingly marking the end of the Call Of Duty loot box era. While innovation is key to forward progression and originality (that, and a community space makes sense for a multiplayer based game) Headquarters needs to be better optimized and take cues from Monster Hunter World and the Destiny series.

While the subtractions will be the most noticeable changes, Black Ops 4 has added two brand new modes to the party. Control feels like a combination of Hardpoint and Domination, but with different rounds like Search And Destroy; Heist adds a bit of Counter Strike flair to Gun Game with a mix of the recent High Stakes mode in Fortnite. In Heist everyone starts with a pistol and each round consists of two teams trying to snag a big bag of cash before escaping via an extraction point. Just playing each round racks up cash for each player regardless if they win the round by extracting the bag of cash. Players then use that money to buy new weapons, mods, and/or upgrades. While Control is the featured new mode, Heist presents the players with something new and interesting, and will likely be added to more players’ rotations than Control.

Another welcome change is that the restrictive Divisions system from WWII has been abandoned for a return of the Pick 10 system that has been popular among the community for many years. Among one of the drastic changes within this system, as a part of the “guns up” marketing they have pushed with this installment, is the fact the player has access to pick Gear as a part of their ten choices. One of the choices under Gear is a stem pack that allows faster and more frequent health regeneration to adds efficiency and a different wrinkle to the game. One issue with classes is that, currently, the assault rifles are clearly the cream of the crop in the gun balancing. When compounded with enemies feeling like bullet sponges at points, this ends up frustrating the player. These issues will always be constantly changing as Treyarch balances the game while possibly adding new guns and such throughout the year.

And this brings us to Treyarch’s baby, Zombies. The studio first graced the world with the mode a decade ago in World At War under the name Nazi Zombies before eventually becoming a staple for the entire franchise. This year, there is not one, not two, nor three, but FOUR experiences (five for season pass owners) in the mode. Three of the four basic experiences are story based with ‘IX’ set in a gladiator ring during Roman times, ‘Voyage Of Despair’ set on the RMS Titanic, and ‘Blood Of The Dead’ as a remake of the Black Ops 2 ‘Mob Of The Dead’ that is set on Alcatraz Federal Penitentiary. The Titanic-based map seems to be the most straightforward while the other two can get quickly confusing and features tighter passageways when in combat. The variety of the three story-based maps is helpful and adds more replayability to the mode, along with the new Rush mode. 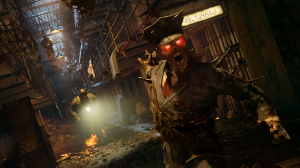 Rush is a limited death mode that is based on whichever player can rack up the most points before they run out of lives. This is a mode that really makes the Zombie create-a-class section shine. As the player progresses and ranks up in the zombie mode, they will be able to unlock new starting weapons and brew elixirs that give them different perks for a limited time. Initially, it may seem like the class you pick is just worthwhile for the special weapon that can be unlocked, but once the mode is played more it is quickly revealed to how valuable the elixirs and perks in each class are. It would have been nice if the zombie mode featured cutscenes for each story-based map.

Speaking of cutscenes, it is no secret that there is no traditional campaign mode this year. There is still a narrative, though, for those players who venture into the Specialist HQ area of the menu. While the mode is essentially a tutorial (which in the later days is what the campaign mostly served as anyway), each specialist receives cutscenes revealing their backstory on how they became the unit we have while also having several mysterious undertones. The issue becomes that since it is not a true campaign and the clips are so short, they come off confusing and what is presumed as the ending really does not answer the questions the player may have. With that said, between the on-boarding mission and the must-win skirmish, which is one of the multiplayer game modes but with bots, each specialist takes around 20 minutes to complete the dossier part while beating the skirmishes under regular and veteran will add a bit more time for each. This leaves the mode taking up just a few hours depending on the player’s skill level. Overall, it mainly feels like a tacked-on mode, if a bit helpful getting players acquainted with the specialist, with just enough narrative to satisfy player’s wanting a bit of a story.

However, even with the skirmishes, the player does not have “real world” experience with the specialist once they jump into the multiplayer modes. This causes the player to have to figure out what works and does not work when playing against real players over multiple modes. As much as I appreciate not having daily and weekly quests, a mission for each specialist that grants the player XP and unlockables after playing every multiplayer mode with said specialist would have been welcomed while having enough incentive to actually complete them. As it is, players will likely just pick one or two and only rotate as a mode calls for it without giving the other specialists a fair shake.

WHILE YOU ARE HERE: Check out the fantastic track-by-track feature that Seasonal wrote for us about their new EP.

For a yearly franchise releasing a game on the tail end of a console generation, Black Ops 4 features a lot of innovations and changes to the original recipe. While some mistakes and miscalculations were made, these are mostly minor details on what could possibly be a new plan moving forward. This game could be the start of Call Of Duty not releasing yearly games and getting more life out of each game, or even cutting out Blackout to become its own IP for Activision. While WWII was praised for bringing boots back to the ground, Black Ops 4 will be remembered by most as the first game that brought back a completely enjoyable experience throughout the entire game. It really is an exciting time for the franchise; hopefully Activision can stay in the good graces of the community and build off this. (Ryan Williford; Gaming Editor)