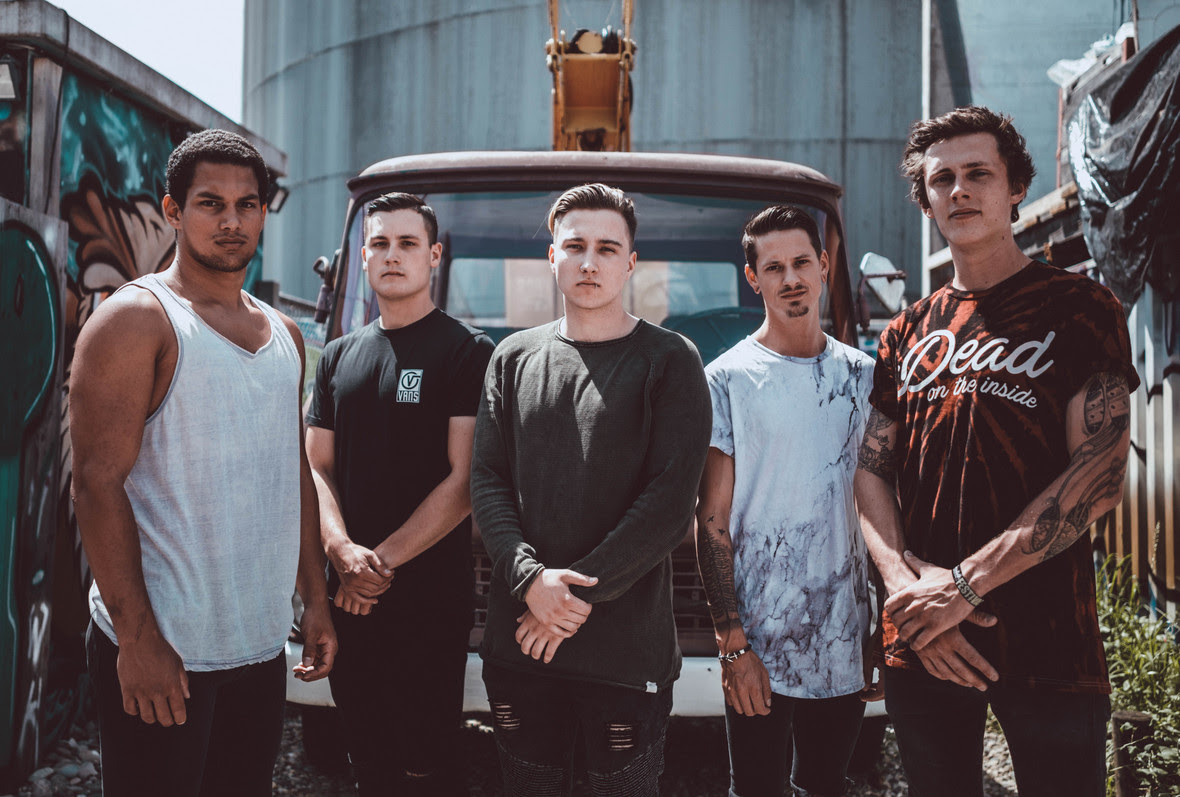 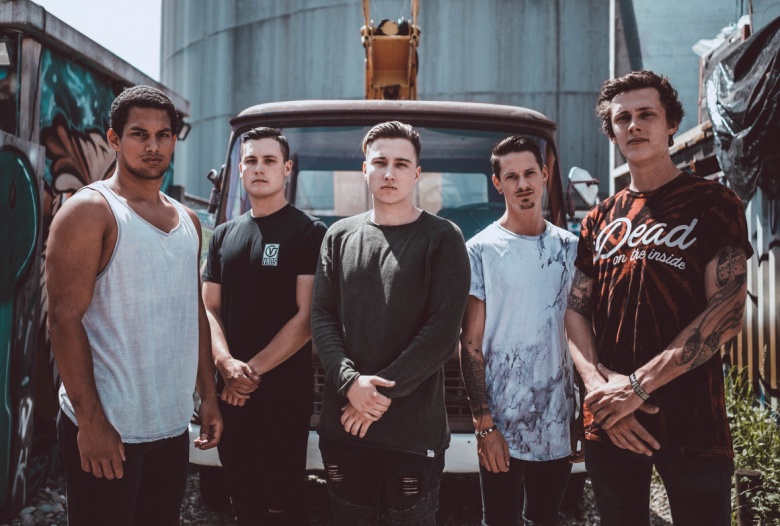 “You see, we are all in this craft and must sink or swim together.”

Suhc is the utterance from pamphleteer-turned-spy Daniel Defoe’s The Adventures of Robinson Crusoe. Indeed, plenty of persons have come to embody this iconic idiomatic phrase as a motivational tool. To sink or swim presenta  ‘do or die’ ethos that prevails and permeates throughout highly determined and driven individuals in an extremety of all in or all out. Such is the mentality and modus operandi of the Swiss Easycore (dubbed ‘EZcore’) outfit of a similar title. Since Sink Or Swim’s 2017 foundations, the band has hit the ground running, churning out an EP titled How To: Level Up, which garnered them certain international notoriety within the European scene. Their breakout into the American scene (namely via their placement on the Spotify playlist “Crash Course”- described as a “collision of punk, metal, hardcore, and everything in between”) is owed to a rapprochment of catchy pop punk melodies with heavy breakdowns, sprinkled with electronic elements, all wrapped up in a positive vibe. Such is the sonoric vibe that can be found in their breakout single, “Twisted Tongue”- a bona fide indicator of what’s yet to come from the youg punk outfit.

I recently had the pleasure of speaking briefly with the band on a multitude of subjects, including their departure from 8-bit/nintendocore in lieu of a new direction and what advancement- in the personal and practical- means in a sea of floating sound. Enjoy!

Sink Or Swim: It’s going absolutely great, thank you for having us!

OTH!: So, it’s been a little over a year since your debut release How To: Level Up and we’re now looking at your first offering of 2018, “Twisted Tongue.” In contrast to How To: Level Up, “Twisted Tongue” feels like a genuine levelling up in your overall musicality. “Twisted Tongue” seems to take the jovial and youthful sense of poppiness found in your previous and gives it a little more poise and finesse. It’s just as toe-tappingly catchy, but the punk elements are more dynamic and grounded. To what do you attribute this growth in sound?

Sink Or Swim: Thank you so much. That actually was exactly the goal, we wanted to create something more mature but increase the catchiness and poppiness. Over the last few months we’ve written a lot of stuff that we weren’t 100% satisfied with. We’ve really played around with our sound a lot and explored where the boundaries are. I think a lot of this “growth” came from really just doing it and a lot of trial and error. We needed to see what works and what doesn’t. I think it also was important that we got more comfortable with the genre so we had more freedom in experimenting, because not everyone was really familiar with this kind of music before we started. In addition to that a lot of instrumental songwriting is now in the hands of our drummer Gino, who does a phenomenal job. This surely had a huge impact as well.

OTH!: Also, it appears that all previous traces of that 8-bit quality that bespeckled How To: Level Up are gone in your new single. Are those Nintendocore-esque qualities something that you intend on leaving in the past as you continue to write more music?

Sink Or Swim: Yes, that is true. We kinda got away from that for now since we couldn’t really see it fitting the new direction we’re heading. We’re still suckers for synths though, as you may have heard we still have quite a lot of electronic elements in our sound. Just not that 8-bit-ish anymore. But who knows, that might make a comeback, just not at the moment. Never say never, though!

OTH!: In your exclusive premiere with New Noise Magazine, you mention that you’re all about positivity and you stress that, unfortunately, others aren’t always so keen on looking at the bright side: “There’s always people with a backstabbing attitude that don’t want you to push for a better version of yourself, but we think it’s important for you to stand above this.” Which begs the question, is “Twisted Tongue” in response to a specific event in which someone came at one or all of you with a negative energy? Or does this song speak to the breadth of naysayers and doubters throughout the duration of the band’s journey thus far?

Sink Or Swim: It’s funny, because it’s actually both. We’ve experienced quite some situations with lots of negative energy involved, be it personally or as a band in the last few months. But it’s just a way of thinking we have regardless. And we want to share that with the world. In our eyes it’s important to stay focused and don’t let other people distract you from what you want to accomplish. The song is actually a message to the ones who struggle with brushing negative people off, but it’s also going out to the ones pulling others down.

OTH!: As much as being the better and brighter person is often the best route to take, such actions and attitudes are easier said than done. What do you do to specifically combat succumbing to the negative energies of people who look at your personal growth with disdain?

Sink Or Swim: That’s true but if you look at it, at least in theory, it’s plain simple. It’s just a matter of minding your own business. I know, as you said, it’s easier said than done and it probably also takes a lot of practice. But if you’re caught up in working on yourself and your goals, you don’t really have the time to focus on negative people. Also if these people happen to be in your circle of friends, get rid of them. Actually, get rid of everything that makes you unhappy. We live one life and you should live that to the fullest.

…A lot of this “growth” came from really just doing it and a lot of trial and error.”

OTH!: One of my favorite trademarks of Easycore is the looming sense of capricious swings of positive mentality that permeates its scene. It’s full of just as many spin kicks without half of the waste negative energy that other heavier genres may possess. However, I feel as if I am seeing less and less EZ bands worldwide. In fact, some of my previously favorite EZ international bands have either gone on an indefinite hiatus, split paths, or turned to EDM due to a multitude of reasons. The one I hear the most from other EZ bands is burnout. How do you as individuals and as a band continue to shine so bright and push past crippling moments of doubt and burnout that have plagued previous bands?

Sink Or Swim: I think the key there is to come up with something fresh. Mainly, the music but also the way you “sell” yourself. The image you provide to the outside world is so important and underrated. To name some precise examples, we want to really push the poppy side of the genre. This genre provides so many possibilities and you can draw the sound in so many different directions, I think this is a huge advantage. And we now want to see how poppy and catchy we can shape our sound, mainly the vocals, without losing our personal sound.

Besides that I think it’s important to always create a lot of content. We live in the social media age so we should use this opportunity. Make videos, post photos, keep your listeners up to date. And try to think outside of the box while doing that. What have you never seen before? Do that.

OTH!: Furthermore, how do you keep Easycore fresh for yourselves?

Sink Or Swim: Honestly probably by not drawing too many influences from Easycore itself. It sounds weird but we think, to keep it fresh, it’s important to get inspiration from as many places as possible. As you may hear in our music we’re influenced by a lot of different genres and I can imagine that, as soon as you start concentrating on one genre too much, chances are, that it gets kinda boring and monotonous.

OTH!: Besides steadfast themes of positivity, what else can we expect from Sink Or Swim as the year comes to a close? As I recall, you have some fast approaching tour dates in Europe, correct? Any plans for a late 2018 album release? Or are there more eargasmic goodies lurking in 2019?

Sink Or Swim: Correct, we have a 13-date Europe run coming up soon, starting on November the 2nd in Switzerland. We then visit Italy, Czech Republic, Germany, Belgium and the UK!

Unfortunately, there will be no releases this year. We’re currently working on our next record and will most probably release new singles here and there along the way! I can’t tell you when the next record will be ready though, we have no fixed plans for that yet. But there will be new music in 2019 for sure, even if it’s just singles!

OTH!: Speaking of 2018, I have to give you guys a congratulations on hitting the fall/winter season ground running! Not two weeks have even passed since the release of “Twisted Tongue” and it’s already landed itself a feature on the Spotify “Crash Course” Playlist! What else do you have planned for the rest of the year while you’re gaining hard traction?

Sink Or Swim: Yes, we were super stoked on that! It definitely came as a surprise but it shows us that this is a direction we definitely can continue to follow! Well, obviously next up is the tour. By the end of the year we usually do lots of planning for the new year. So it’s probably that and songwriting that will consume most of our time in the 2 months that are left. But we will start to push out Youtube content way more often, even if it’s not really music related. We just love to keep everyone up to date on what’s happening on our side. So if you check back on our Youtube channel once in a while I’m sure you’ll find some new content!

OTH!: Well, that’s about all the time I have for you guys today. Before I let you go, is there anything else that you’d like to add?

Sink Or Swim: Honestly, first of all: Thank you for this very interesting interview. We can see you put a lot of time into preparing for this and we highly appreciate this! Besides that – stay positive folks. Find out what you want and go get it!