Nostalgia can be a hell of a drug as a fond memory directly correlates with an uptick in serotonin, dopamine, and oxytocin levels. Yet more times than not, when revisited, the neurochemical cocktail of nostalgia quickly wears off, with the beholder realizing that there is a reason why this jogged memory is an anachronism in their lifetime rather than a present presence. Nostalgia is partly the reason why Wasteland 2, the sequel to the game that became the basis of Fallout, was first envisioned and then saw a successful crowdfunding campaign. When Brian Fargo, the co-designer of the original Wasteland and the founder of its studio Interplay Productions, launched the Kickstarter for Wasteland 2 in 2012, it met its goal in two days.  The game was initially released in 2014 before seeing a Director’s Cut released the very next year. Now Wasteland 2: Director’s Cut sets its eyes on the Nintendo Switch. Does it make the cut or is it just an empty wasteland? 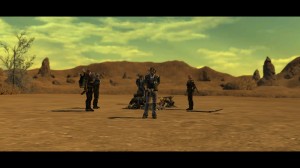 The best place to start is the story, which just so happens to also be the best part of the game. After an interesting opening cinematic, which sadly saw audio and video stuttering, the game kicks into its forty hour story. These events begin in the Arizona desert after a nuclear war devastates the United States, with focus shifting locale to California later in the game. After the player is tasked with finding the killer of one of their fellow Desert Rangers (a squad of soldiers that provide aid to the survivors in the area), the story sets off into a plot that eventually involves AI, robots, and murderous factions. If this all sounds familiar, remember this series was the spiritual father of Fallout. With that said, the story is bar-none the strongest point of the game due to its great dialogue that is supplemented well by the voice acting, leading to a fantastic immersion element for the player.

After the story, everything quickly falls apart. This is especially true with the quality of life elements of the game. First and foremost, the text size is so microscopic that even at its biggest it is hard to read. This is a particularly major issue in handheld, when the screen is closer to the player’s eyes, as there is a lot of text to read. Additionally, the camera’s very limited scope renders itself rather useless: it can be tilted, but it just gives a bad angle regardless of where the player sets it. Lastly, there is the cumbersome menus throughout the game that is made worst by the tool tip pop-ups that muddle the entire process even more. Despite the burdensome menus, upgrading the team through attribute points and skill points while adding perks is as smooth of a process as it can be in this interface. 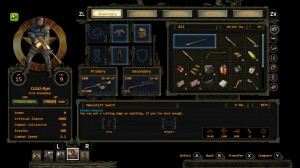 The user interface may not be so bad if not for the bland, older looking graphics. What makes matters worse is the muted color palette that features many shades of brown, almost like Fallout 3 and its many shades of green. Then there are the aforementioned technical issues in the game. Those initial issues grow to include choppy frame rate and occasional hitches when opening doors and taking to NPCs. There is also very noticeable input lag when pushing the analog stick for character movement. Both of these aspects combine to create the absolute worst part of the game: the game’s traversal between outposts. The player’s location is marked by a location marker over an overworld map that is surrounded by a “fog of war.” This system may be true to the series’ roots, but the system has not aged well and makes for a growing disinterest in gameplay.

While the game features grid-based, turn-based strategic combat (think XCOM) and a great story, Wasteland 2: Director’s Cut leaves a lot to be desired. Not only that, but the Director’s Cut features very few enhancements from the original. All of this combined with the technical issues leaves a bitter taste in the player’s mouth even with the story being such a bright spot. This brings down the game’s potential even with the wider reach it is receiving being on the Nintendo Switch. In the end, anyone that likes the original Wasteland or Fallout games will love this game while gamers who like modern conveniences will most likely despise the gameplay present here. (Ryan Williford; Gaming Editor)