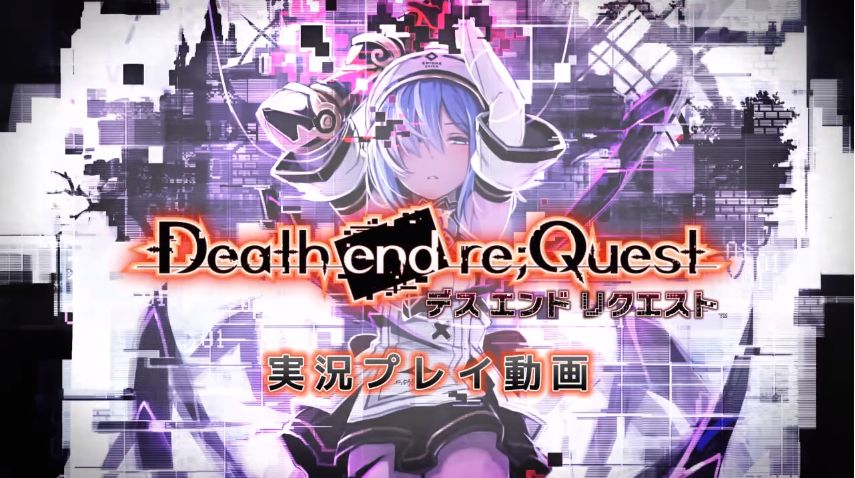 Compile Heart and Idea factory, what a combo! Over the years, they have built a reputation for making light-hearted, lower-budget RPG’s that cater heavily to the fan-service crowd. Bouncing boobs, panty shots, and breaking the fourth wall are all very common themes within their releases. This labelled Compile Hearts games to a very specific audience or at worst, made some titles the laughing stock of some close-minded gamers. Does Death End Re;Quest  Change any of the tropes the developer has walled themselves into? Does the game offer anything to casual JRPG fans or is it just fan-service for people who like games made by Compile Heart? Let’s find out!

Death End Re;Quest has had some curious release information and from the trailers alone, it could be assumed that something different was coming from this game, rather than the usual fare. The story is a bit difficult to explain, as there are facets to it that reveal themselves as the game unfolds, but the basic premise is the player takes on the role of Arata Mizunashi, who works for a game company called Enigma. Enigma was trying to create a new experience in the virtual reality space. Their primary goal was to use a new game engine made by a third party, titled the Alice Engine, which would allow characters to learn in real time, adapt, and have a deeper AI. Work had begun when suddenly the contractor for the project, Aggle Inc, decided to pull the plug and archive any work completed or started on the experimental title. After this cancellation, a programmer named Shina abruptly vanished only to be found by Arata a year later in this broken, decrepit game world that should not even exist. She has lost her memory and is logged into the game from an unknown remote location using her specially developed VR headset. In addition, the logout button has also been modified and removed, preventing Shina from escaping. The MMO in question starts back up unprovoked and filled with changes, either through outside modification by an unknown party or evolution brought on by the Alice Engine. Whichever the case may be, the game is filled with glitches, instability, and danger. Some glitches and events have detrimental effects on both the real world and game world. Shina is this bridge that allows these two worlds to co-mingle and blur the lines between them for everyone. Theming here may sound familiar through more popular forms of other media such as Sword Art Online or Ready Player One, but it takes that basic frame work and runs with it to create its own unique story filled with mystery, violence, and a brooding atmosphere. The departure from something like the Neptunia games is a bit of fresh air for the company. This title still does contain some of their key aspects like fourth wall breaks, humor, and fan-service, but they are not the main focus. Death End Re;Quest has a very serious tone for the most part and visceral violence is not shied away from. Initially, this can come off as jarring, but leads to being one of the saving graces in making the title stand on its own.

The game itself is split into two distinct playstyles starting within the real-world. In this segment, the player is Arata, where he can converse with people, progress the story, and unlock things in the game world. These sequences play out in a visual novel style format, with choices given during conversations and it even has cutscenes. When the player is given these choices, it can go poorly and cause a bad ending, accompanied by a game over. It is recommended that you save frequently as the game allows you to save during dialogue scenes, likely as a deterrent to making the wrong choices. I learned my lesson quickly after choosing wrong and losing a couple hours of non-saved gameplay. My mistakes aside, save very often, especially if it seems like a big event is about to happen. The second style of play is the dungeon-crawling JRPG aspect. Exploration is played in the third person and the gamer must navigate through dungeons to reach the end boss and clear up bugs within the VRMMO. Contained in these segments are mild navigational puzzles that play out in a defined pattern. Death End Re;Quest itself is linear in its nature and the player will not be running around haphazardly to new areas, as it has a set path laid out for the player. Returning to previous areas is possible at any time, but the forward progression is limited by story. Sometimes during the gameplay, the player will run into unpassable roadblocks in the VR portions where the real world portions are mandatory to continue. Changes made by Arata, through de-bugging the code in the real world, force changes inside the MMO. It causes glitches and other barriers to be fixed, allowing the story to progress. Initially, it was off-putting to be forced to stop exploring and get a dosage of plot. Like the gameplay though, this trade-off did grow on me in the end and allowed the game to have nice pacing.

A feeling that I get when playing most Compile Heart/Idea Factory games is budget constraints. It is clear that these are AA titles or lower, which shows in some of the presentation or gameplay aspects. Some things do not seem fleshed-out to their fullest potential and are only explored to what the budget will allow. Despite these constraints, the development team seems to have taken their time to polish the story artwork scenes and script, but the gameplay exhibition is lacking. Some environments come off as a little bland and same-y. Audio cues are reused to ad nauseam in instances of opening chests, battle scene dialogue, and breathing audio while running. The “tired breathing” sound after sprinting or walking is one sound that affected my experience, until I learned to tune out the repetitious nature of it. One scene seemingly had a pre-rendered background for a story segment that looked particularly bad. Corruption visualizations while exploring were a nice touch to the dungeons. It gives the feeling that the player is actually trapped in an unstable, bug-ridden environment. Gameplay presentation shortcomings aside, the story segments are a different beast. Gorgeous pseudo-animated portraits during the visual novel and speaking sections of the game are on the other side of the coin when it comes to presentation. Portraits and full body images of the characters seem to move and breathe during these static scenes, the closest example is something akin to the “Live 2d” used in the Criminal Girls series. The effect is well done, and the developers should be commended on the love and care they put into that aspect. Contained within are also some nice static cutscene drawings that help to give the game some more personality as well. Battle segments have a generic feel to them as spoken above, but after learning the nuances of the system and genre switching, it comes into its own.

One could describe the combat system as an eclectic mix of Lost Dimension, the Tales Of series and Billiards, of all things. Fighting gives that feeling of Pool because players can bank, bounce, and combo to huge hits with the enemies. Foes can ricochet off of the boundary walls and other enemies, forcing thought to be given where the best place to position the team is, in order to catch enemies after a rebound attack. After they bounce into one of the player’s teammates, an automatic combo is triggered which will send them flying in the opposite direction. If done correctly, this can be done multiple times, leading to massive damage. During the combat, three actions can be chosen during a turn for each character – whether they be attacks, magic, items, or defense. Choosing attacks in a certain order will give a percentage of probability to learn an entirely new skill. This is an interesting way to present growth and skill learning, versus the more traditional learning skills when characters level up. While in battle, “bugs” (think bugs found within game code) show up as physical objects during the fight, which can be removed to allow Arata to work some coding magic. He can alter enemy behavior, change the bug effects, summon old bosses to brawl for the player, or even temporarily change the genre of the fight. A good example of this would be the ability to change to a third person shooter for a round, leading to an entirely different experience within the same game. Removal of the bugs is not the only purpose you can use these items for. If characters are allowed to touch or get too heavily damaged by enemies, a percentage gauge will build. Once this gauge reaches a certain level, transformation into ‘glitch mode’ will occur. This causes a change in costume and the ability to use different and more powerful attacks. The wardrobe change is a cool addition, even if it brings out the fan service nature of Idea Factory. Using glitch with a individual character can cause massive singular damage to adversaries, but caution must be used when deciding to use this action, as it leaves the characters open and vulnerable themselves.

I am not going to tell you that Death End Re;Quest is the next life-changing RPG experience, like the Persona series, but it does have its own identity and demands your attention. This game tries many new things to get the company and the player out of their comfort zones. Some of these ideas work, to great effect, while others just lead to a somewhat clunky experience. I do feel that this game has enough things different about it to welcome more casual fans of the genre to give a try, but it will not change your mind about these types of games in general. From the bland presentation to the great music and artwork, you get a mixed bag of quality which has some effect on the title as a whole. The experimental nature of Death End Re;Quest does give the game a great personality and the quality of writing and story is worth experiencing. Go in with some muted expectations and an open mind to find yourself a quality title begging to be played.  (Frank Granados; Gaming Staff Writer)