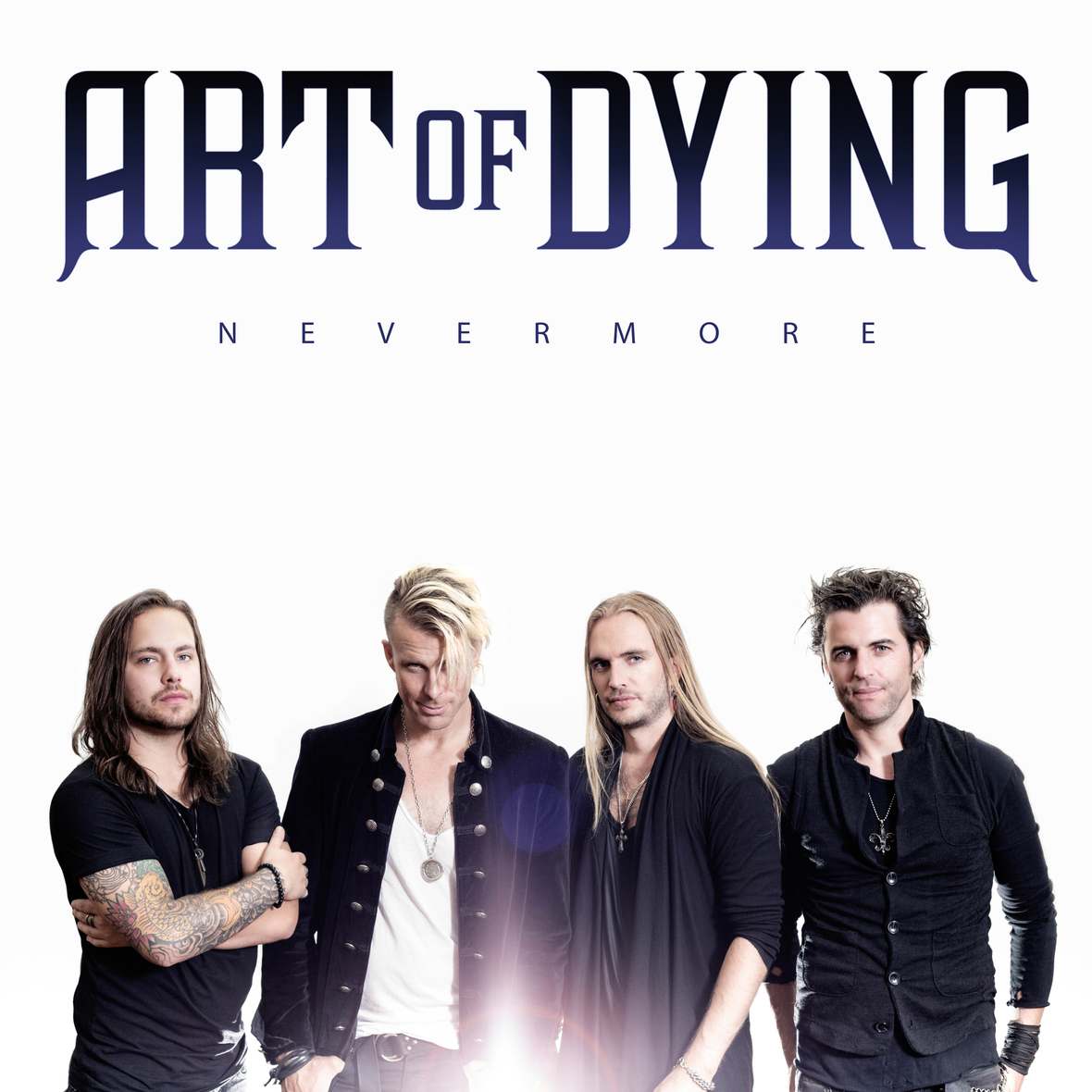 (August 27th, 2016) –  Art Of Dying recently released their new single, “Torn Down,” off of their upcoming EP NEVERMORE. The band will have brand new music in tow on their 40+ US headlining tour, with support from Children 183 and Letters From The Fire. The NEVERMORE CD will be available at their shows and at www.artofdyingmusic.com and drops Sept 2nd on iTunes, Spotify, and digital/streaming outlets everywhere.
Preorder NEVERMORE on iTunes starting TODAY for $2.99 (USD) and get “Cages” as an instant grat track! Special price ends Sept 2.

“Torn Down is about believing in yourself, plain and simple. Sometimes it’s hard to dig deep and find your pilot light in the darkness, but it’s there.”, says Art Of Dying singer Jonny Hetherington. “I came across Amanda and Jonah’s (Amanda Todd and Jonah Mowrey) stories on YouTube and they really affected me. In a way, they both inspired this song. Unfortunately we lost Amanda. I hope ‘Torn Down’ can be a beacon to those who find themselves at the end of their rope.” 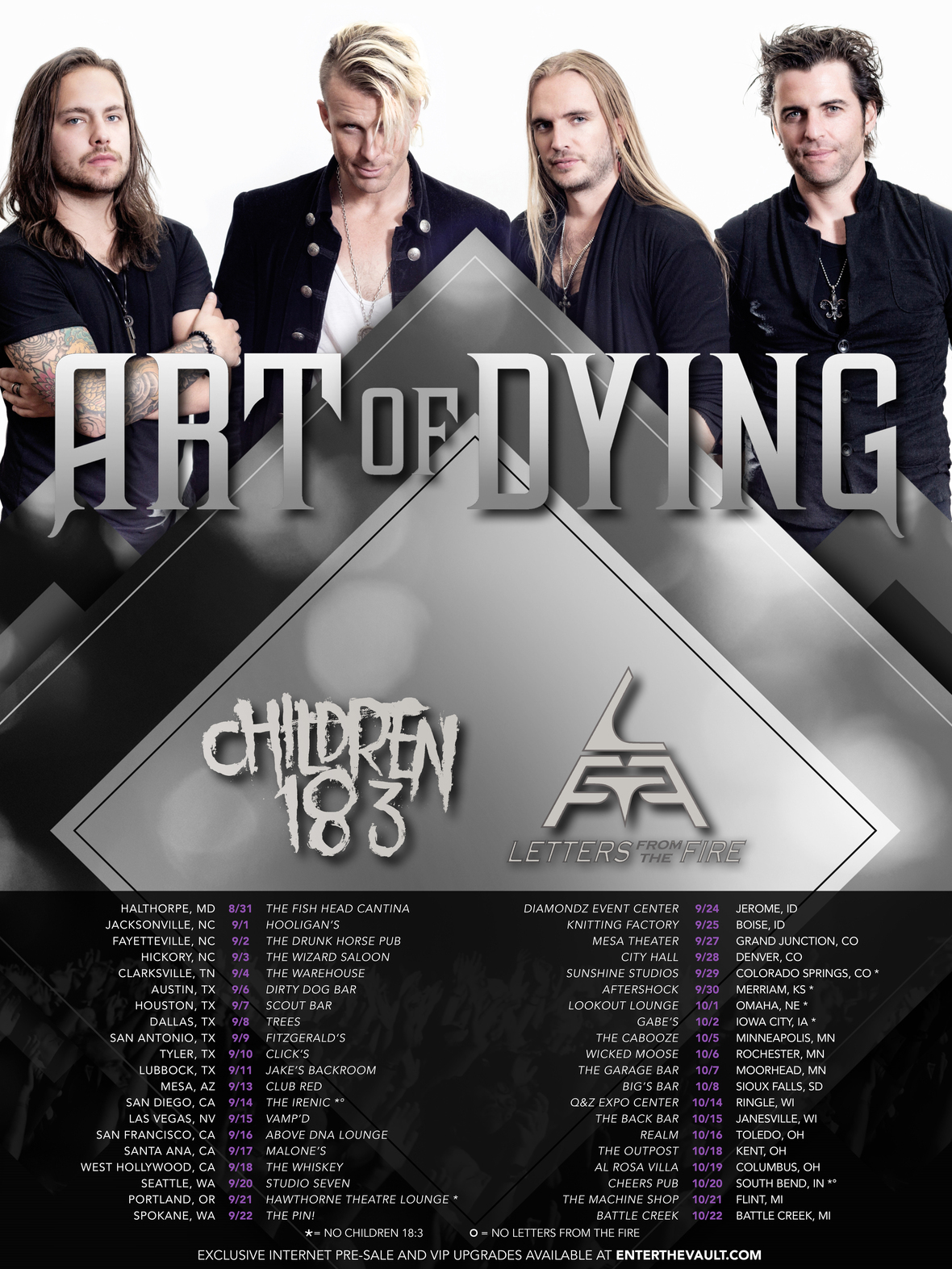 About Art Of Dying

There is an old saying which claims that great art is 90% perspiration and 10% inspiration. The truth though is that exceptional creativity is nurtured by a complexly brewed combination of unswerving dedication and God-given talent. It’s a fact no better illustrated than by the history of Vancouver’s hard-rock icons ART OF DYING and their talismanic frontman Jonny Hetherington. From hours busking on the corners of frozen streets to gatecrashing some of North America’s biggest venues, to writing and recording records of truly earth-shattering proportions, the trajectory of the quartet’s career has astonished both fans and industry insiders alike.

“In my early days as a musician I just wanted to play and hone my chops,” explains Hetherington, “and playing on the street seemed like the best way to do that. I’ll never forget the folks who came and took notice of what I was doing back then, lots of them are ART OF DYING fans now and I think that’s testament to what we’ve been able to create as a band.”

And what ART OF DYING have been able to create is muscular, vivacious hard-rock bursting with lung-shattering choruses and a sincerity that is impossible to fake. Equally at home with a lead-fingered riff or a deft slow-burner, there is an ease of breadth in AOD’s repertoire that would send most of their peers salad-green with envy.

“I was blown away when I first heard their independent record,” enthusesDISTURBED guitarist Dan Donegan. “I lived with it for quite a while and I was so impressed with the quality of the songwriting that I had a feeling there was something special going on. David (DISTURBED vocalist David Draiman) and I had been looking for someone to sign to our imprint for a while, but I wanted to make sure the guys could do it live – it’s hard to find a band that are the complete package these days. So, we invited them out on a DISTURBED tour of America, we really threw them in the deep end!”

The band introduced guitarist Tavis Stanley and bassist Cale Gontier to their ranks on the eve of the run with DISTURBED – the quartet playing onstage together for the very first time during the soundcheck of the opening show of the tour. But suddenly, everything clicked. “The moment I knew that we had it right was when our voices started harmonizing,” says Hetherington, of the band’s now-trademark three-way vocals for which David Draiman has dubbed them “Eagles in Chains” referencing a blend of 70s supergroup The Eagles and 90s grunge rockers Alice In Chains. “It felt like the band I had always been looking for and that tour went brilliantly for us – it was the catalyst for us to step up to another level.”

Now, with two critically-acclaimed and widely-played major label albums under their belts, ART OF DYING are returning with new independent extended player NEVERMORE, their most imperious effort to date.

“After wrapping up an extremely difficult record (Rise Up, 2015, Eleven Seven Music) with David Bendeth (Bring Me The Horizon, Breaking Benjamin, Of Mice and Men), we have circled back to our roots on NEVERMORE”, states guitarist Tavis Stanley “working with long time collaborator and producer Mark Holman.”

“A lot of the lyrical content on this album is about overcoming adversity,” continues Hetherington. “About taking yourself beyond where you thought you could go… about stepping away from toxic relationships.” Take the second track “Torn Down” for example, a grinding anthem that deals with seeking out and reaffirming your inner pilot light even in the darkest of moments. “All or Nothing” the opening song, boasts a freight train of a riff that screeches off the tracks into a chorus that throws caution to the wind, screaming GO FOR IT – “there’s no next time!”. The title track, “Nevermore” is a self empowering victory speech disguised as an emotional ballad. If you’ve ever had to muster up the courage to walk away from an abusive relationship, this is your song.”

Indeed, if NEVERMORE is about one thing above all else, it is a study on the power of human will and the uplifting capacity of one’s own self belief. This is rip-snorting rock ’n’ roll that will smash your self-doubt into a million pieces. It’s a record for the believers, for the die hards, for those sick of getting torn down, but also those who realize they are strong enough to get back up..

Connect with Art Of Dying