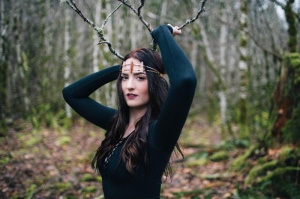 SEATTLE, WA | MARCH 10, 2016 – While busy working on her new EP set for release this Spring, Seattle’s rising pop singer/songwriter Amanda Markley has been turning heads by dropping a slew of raw, stripped down covers that highlight the strongest female pop artists, such as Halsey’s “Hurricane” or Joy Williams’ “What A Good Woman Does,” leaving fans excited to hear original tracks from the artist. Today, Amanda Markley is thrilled to share the lyric video for her latest original track, “Monster” which can be viewed exclusively on AXS.com. “Monster” is a collaborative effort with friend and fellow local songwriter Matt Bacnis, and produced by Chase Manhattan (Night Argent). Markley is sharing the song to celebrate the start of her West Coast tour with Chloe Hendrickson, which kicks off 3/14/16. Here is what Amanda had to say about “Monster“:
“This is a song about love, but about so much more than that. ‘Monster’ is about getting totally caught up in a relationship and swept away. The lyrics in this song are a call to action to hold on tight to that true love and to fight for it with passion. Love can be a dangerous game like a ‘Monster,’ but you have to be brave and take on the thunder to see the sun.” – Amanda Markley
Markley has been busy in the studio with Matt Bacnis and Adam Mitchell (She Is We), wrapping up a slew of new tracks to be featured on her forthcoming EP. The first single from the EP, Jealousy was released in 2015 in a partnership with Cadence & Cause, sending all proceeds of single downloads to the charitable cause of rescuing homeless animals and finding them homes. After releasing the EP’s newest single, “Monster,” Amanda will be heading out on a short West Coast tour with Chloe Hendrickson before returning to complete the EP.
Head over to AXS.com today to stream the lyric video for Amanda Markley’s latest track, “Monster.” Tour dates for her tour with Chloe Hendrickson are posted below.

AMANDA MARKLEY is a pop singer/songwriter hailing from Seattle, WA. Following a life-altering spinal injury that caused her to pull back from her passion of horseback riding, Amanda learned to cope by writing her emotions in a journal. Her writing became inspiration for her new passion in music and the lyrics of her first songs.  Now, able to ride horses again, Amanda Markley strives to inspire and give others courage to follow their own dreams – a passion you will find intertwined in many of her own lyrics.
Early in her career, Amanda’s original song “Breathe,” was heard by acclaimed songwriter Scott Krippayne, who has penned No.1 hits for Jordin Sparks, Demi Lovato, and Blake Lewis, to name a few. Krippayne was so intrigued by Amanda’s soulful songwriting, he produced her first album, as well as co-wrote a song titled “You and Me” on her debut album, also titled Breathe.
In 2013, Amanda Markley was chosen from Ernie Ball’s Battle of the Bands to play Van’s Warped Tour on the Acoustic Basement stage in Seattle. Markley has also shared the stage with artists such as Aaron Carter, Tyler Ward, William Beckett, and more. Captivated by the local coffee house vibe of the Pacific Northwest, the singer often plays vocally rich and emotionally raw acoustic sets. When not performing in an intimate setting, Amanda commands the stage with a full band and is a regular performer El Corazon, Chop Suey, the Hard Rock Cafe and other iconic venues in the Seattle area.
Markley is currently in the studio working on her upcoming EP. The first single from the EP, Jealousy was released in 2015 in a partnership with Cadence & Cause, sending all proceeds of single downloads to the charitable cause of rescuing homeless animals and finding them homes. Chase Manhattan (Night Argent) produced the music video for “Jealousy” which premiered exclusively with PopWrapped. The EP is set to release early 2016 with a slew of new tracks, videos, and more on the way.
This budding songwriter’s music can be heard on Spotify, Pandora, Sirius Radio Coffee Café, Seattle Wave Radio, and more. Follow Amanda Markley on social media (@amarkleymusic) for future announcements and new music soon!
AmandaMarkley.com  | Facebook | Twitter | Youtube | Instagram | SoundCloud